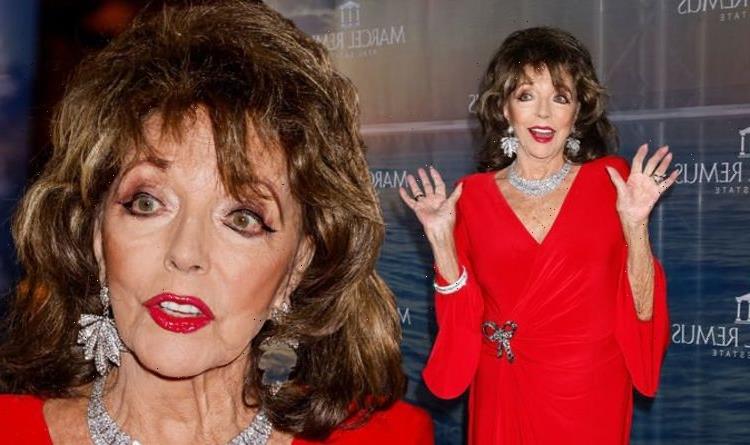 NTAs: Joan Collins walks out to ‘Simply the Best’

Joan Collins, 88, decided to quit Twitter after receiving a lot of “nasty remarks” when she voiced her opinion on Covid rules being breached. The actress detailed the reasons why she quit in a recent interview.

Joan spoke in a recent interview about what drove her to quit Twitter, saying she could not deal well with the public backlash.

When she felt that lockdown rules were being breached at her apartment in London’s Belgravia she called the police and voiced her anger over the situation on Twitter.

The actress’s apartment at Belgravia has had scaffolding and builders there for months, angering Joan, especially in lockdown.

Joan spoke about the issue on Twitter at the time and was bombarded with hateful comments.

She told the Daily Mail on Sunday in their Weekend magazine about the incident.

Joan said: “I got all these nasty remarks and thought, “F*** this. I do not need this.”

Joan is known to have always been very vocal about her opinion, having spoken out about Prime Minister Boris Johnson back in July.

Writing in the Daily Mail in a column she said: “In this, my fifth quarantine, I feel trapped, as if in prison for a crime I didn’t commit, with the Covid warden threatening to call or visit at all hours.

“On top of which our building is covered in workmen and scaffolding, so there is hardly any light or privacy.”

“The amount of money this Government has wasted checking that doubly vaccinated people are staying in their homes is obscene.”

Joan appeared on Good Morning Britain in January to stress the importance of people being vaccinated amid the ongoing pandemic.

She said on the show: “I don’t think these stringent lockdowns are doing what they should do, as far as I’m concerned everybody go and get the vaccine.”

In December on Good Morning Britain she compared the pandemic to World War II.

Joan said: “We’ll meet again, as soon as possible, I hope, and I think we will.

“Now that we have this vaccine that I will go rushing to get, I think that we can all start to looking on the bright side again.”

Joan is an English actress, author and columnist and recipient of several accolades including a Golden Globe award and a People’s Choice Award.

In 2015 she was made a Dame by Queen Elizabeth II for her charitable services over the years.