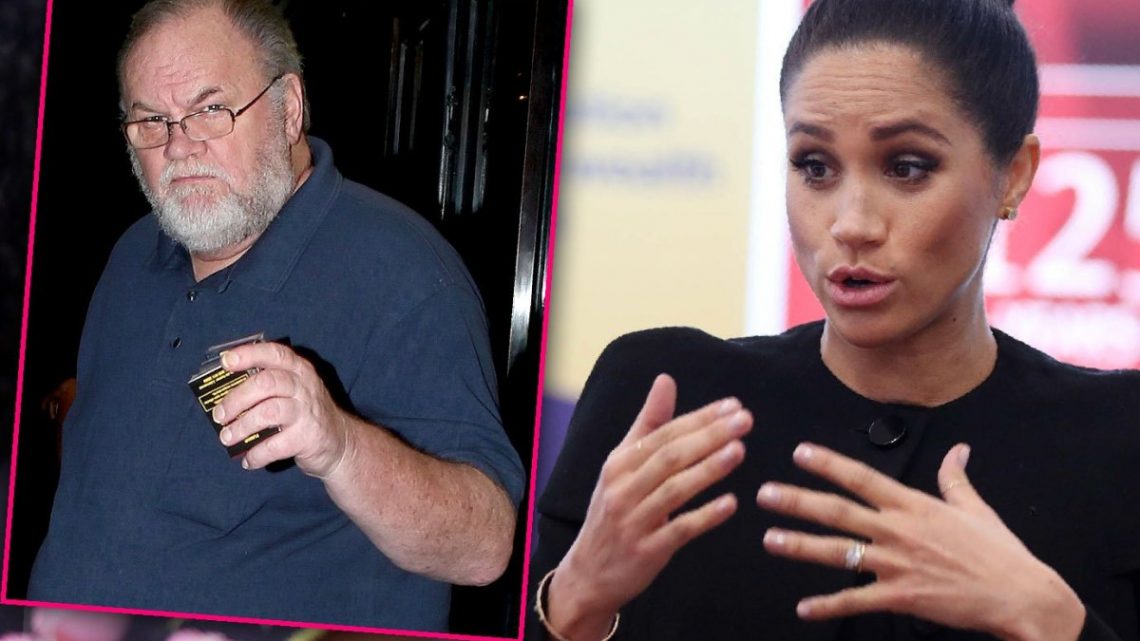 Thomas Markle has betrayed his Duchess daughter Meghan once again by slamming a letter she wrote begging him to stop attacking her husband Prince Harry.

As the Mail On Sunday has reported, Thomas has disclosed how in the five-page letter, she implored him to stop the “painful’ attacks on “patient, kind and understanding” Harry.

Thomas told the British publication that he’s kept pregnant Meghan’s letter private for months, but the famous train wreck father has burned their relationship again by spilling about it this weekend.

“When I opened the letter I was hoping it was the olive branch I’d longed for,” Thomas told The Mail. “I was expecting something that would be a pathway to reconciliation. Instead, it was deeply hurtful.” Thomas claimed he wouldn’t have confirmed the letter’s existence if it hadn’t been reported on this week.

PHOTOS: Watch Out, Meghan! Prince Harry Cozies Up To Rihanna At Barbados Concert

Anonymous friends of the Duchess claimed to PEOPLE that the letter from Meghan, 37, to her dad

was a loving attempt to heal their estrangement. But Thomas, 74, has a much different opinion, saying, “There was no loving message in there, nothing asking about my health, nothing from her saying, ‘Let’s get together and heal our differences.’ ”

Meghan wrote of trying to contact him before her royal wedding to Harry. Thomas wound up backing out of attending the nuptials after he’d suffered a heart attack.

She accused her father of ignoring her attempts to reach him, writing, “From my phone alone, I called you over 20 times and you ignored my calls… leaving me in the days before our wedding worried, confused, shocked and absolutely blindsided.”

Thomas told The Mail, “I don’t know anything about 20 phone calls. There were no missed messages.”
PHOTOS: Inside Prince Harry And Meghan Markle’s English Country Love Nest – See Photos

He contended he’d sent Meghan a text message dated May 16 telling her he couldn’t fly to England as previously planned. Thomas showed the publication a text message which read, “Surgery went OK… The doctor will not allow me to fly so of course I’m sorry but I can’t come. Love you and wish you the best of everything.”

He added, “The doctors absolutely refused to let me fly to the wedding after my procedure. As soon as I knew this, I texted Meg and Harry to let them know I couldn’t be there.”

In another passage from the letter, Meghan wrote, “We all rallied around to support and protect you from Day 1 and this you know. So to hear about the attacks you’ve made at Harry in press who was nothing but patient, kind and understanding with you is perhaps the most painful of all.”

Thomas said he called his daughter after the feud began “but she never picked up.” On the other hand, Meghan wrote to him, “You’ve told the press that you called me to say you weren’t coming to the wedding – that didn’t happen because you never called.”

She accused her dad of asking for money, writing, “You’ve said I never helped you financially and you’ve never asked me for help which is also untrue….”

Thomas has claimed that both Meghan and Harry have “misunderstood” him, even as he’s constantly dished about their relationship and bashed the royal family to the press.
PHOTOS: Baby Fever? Prince Harry Plays With Kids During Children’s Home Visit

According to a PEOPLE magazine source, “He knows how to get in touch with her. Her telephone number hasn’t changed. He’s never called; he’s never texted.” However, Thomas has shared texts he sent to Meghan along with her letter to him.

He showed The Mail that Meghan now has a “restricted” phone number, so he can no longer call her. Thomas sighed, “The number worked until a couple of weeks ago. I sent them numerous text messages and I tried calling. “This is not the girl I know.”

The father who once worked in Hollywood claimed the ex-Suits star never mentioned loving him in her letter. “Meg [once] wrote me tons of letters and cards over the years. She always signed off with ‘Love’ or ‘Love you.’

“This letter is cold. When she signs off it’s ‘Meg.’ You read the way it ends and it felt like a final farewell to me. It doesn’t even start out with ‘Dear.’ It’s just ‘Daddy.’ Meg accuses me in the letter of cashing in but I’ve only accepted a few payments. I worked it out and if I’d taken all the offers I’ve had, I could have made $600,000. I haven’t done that.”

Thomas revealed Meghan, who is expecting her first child with Harry this spring, also wrote, “Please stop taking the bait from the press. I realize you are so far down this rabbit hole that you feel (or may feel) there’s no way out, but if you take a moment to pause I think you’ll see that being able to live with a clear conscience is more valuable than any payment.”

Meghan’s dad fumed, “I haven’t attacked Harry. I told him to man up. I still believe he should have flown to LA to see me, first to ask for my daughter’s hand and later to sort out the problems between us. He has all the resources in the world at his disposal.”