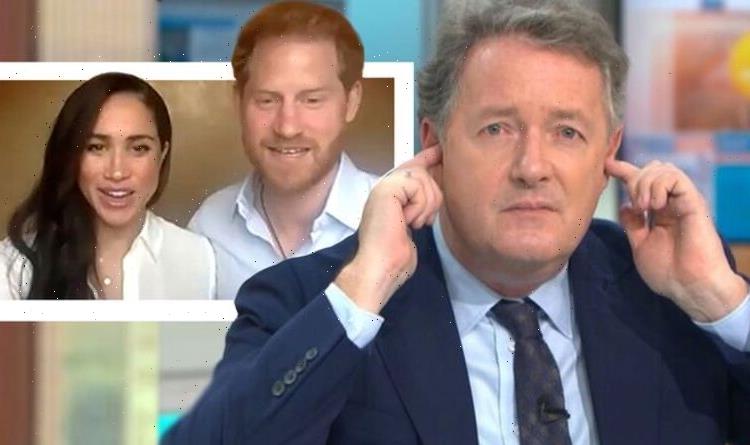 We all know Piers Morgan, 56, will never miss an opportunity to take a swipe at Prince Harry and Meghan Markle and this time, it was over their response to the unrest in Ukraine. He shared his disdain for their message to the Ukrainian people, mocking the sincerity of it.

This will really rattle Putin

It comes after ITV’s Chris Ship tweeted the message from The Duke and Duchess of Sussex.

He penned: “A message on Harry and Meghan’s Archewell website tonight as they ‘stand with the people of Ukraine’ and call Putin’s actions a ‘breach of international and humanitarian law’.

“The Duke and Duchess of Sussex ‘encourage the global community and its leaders to do the same.'”

Harry and Meghan’s statement comes after Russia launched an invasion on Ukraine on Thursday, in the biggest attack on a European state since World War Two.

Vladimir Putin hit the country with early morning attacks, targeting cities and bases with air strikes in an ambush which the West feared had been coming for weeks.

Ukrainian President Volodymyr Zelensk also declared martial law and has called on citizens to volunteer to fight for their country.

It’s made many question whether WW3 is on the cards, with other world powers vouching their support for Ukraine.

Piers had been watching very closely the events unfolding between Ukraine and Russia, and branding Putin a “ruthless dictator” as he offered up some potential solutions for halting the terrifying events.

Taking to Twitter, he penned: “Putin’s doing this because he got away with it last time in Crimea.

“And if he gets away with it again in Ukraine, he’ll keep invading other countries until he restores the Soviet Union.

“The world must unite to stop this ruthless dictator – before it’s too late.”

In a separate tweet, he shared: “This is an act of war by a bully-boy thug who doesn’t think the rest of the world has the guts or will to stop him.

In a sombre address, Prime Minister Boris Johnson told ministers it is “a dark day in the history of our continent” following the invasion of Ukraine.

He held a Cabinet meeting on Thursday evening, which followed a Cobra meeting.

Mr Johnson told ministers President Putin has launched “a cynical and brutal invasion for his own vainglorious ends”, a No 10 spokesman said.

The spokesman said: “He said the UK could be proud of the actions it has taken so far, playing a leading role in NATO, developing a tough economic sanctions package together with our allies, and providing lethal defensive weaponry to the Ukrainian government.

“He told the Cabinet that the Ukrainian military was fighting back in defiance of Putin’s attempts to subjugate Ukraine. And he pointed to protests within Russia which demonstrated that Putin’s actions would also face resistance from within his own country.”

The Cabinet was also briefed by the chairman of the Joint Intelligence Committee Sir Simon Gass, and the Chief of Defence Staff Admiral Sir Tony Radakin.

The spokesman added: “The Prime Minister concluded by saying Putin must fail, and that the UK would work with its allies to achieve the restitution of the sovereignty of Ukraine.”