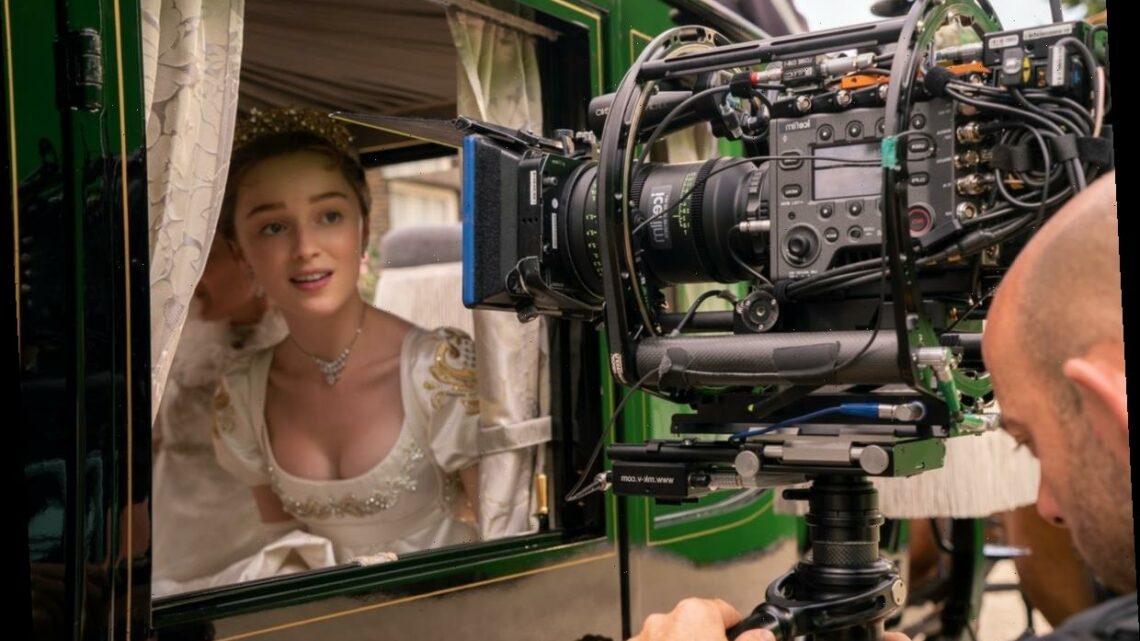 Bridgerton is one of Netflix’s biggest hits of the year, no small feat after the successes of Tiger King and The Queen’s Gambit. Fans are hungry for every little tidbit they can get their hands on, from hidden episode details to plot points from the Julia Quinn novel series on which it is based. But some of the best details about Bridgerton aren’t related to the story at all. It’s what went into making the show in the first place. These Bridgerton behind-the-scenes facts are worthy of their own Whistledown column.

Bridgerton feels different from most other romance adaptations, and a quick dive into the behind-the-scenes shows why. Unlike Lifetime and Hallmark fare, which are basic cable budget movies, or even series on STARZ, which are premium cable budget TV shows, Netflix went all out in spending. Bridgerton is a Regency romance done on the same level budget as a show like The Witcher. But where The Witcher spends all that cash on CGI monsters and giant battles, Bridgerton uses it on costumes, wigs, jewels, and locations. Most of these behind-the-scenes facts dive into the show’s lavish details and how so much exacting work went into creating this gorgeous show.

1. The Show Was Shonda Rhimes’ Idea 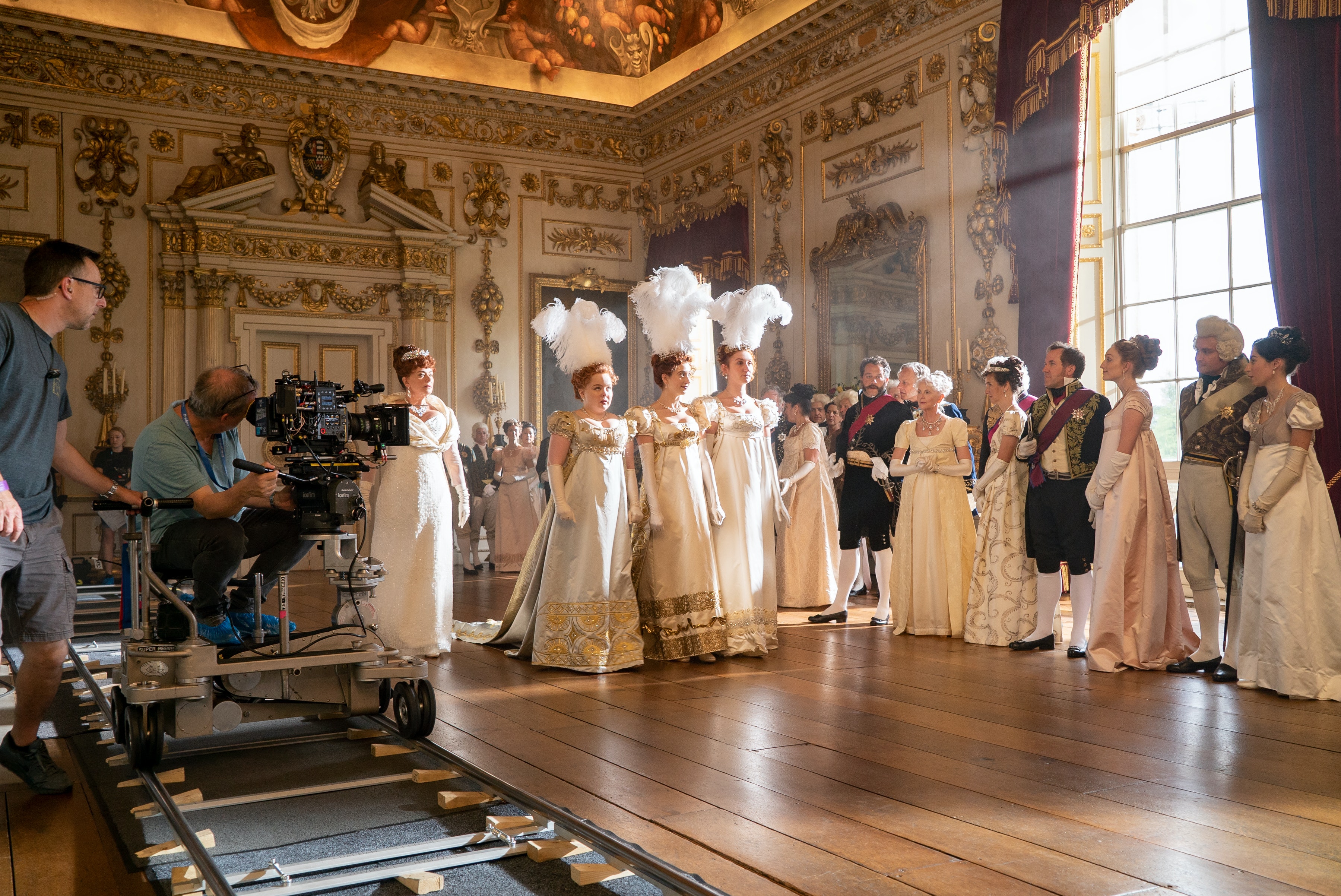 Executive producer Shonda Rhimes is not directly credited for Bridgerton. The show is listed as created by Chris Van Dusen, who serves as its showrunner. But doing a regency set series was her idea. According to Van Dusen, she gave him the Julia Quinn novels. Speaking to Cosmopolitan UK, he said she wanted him to bring it to life on-screen, and after reading the books, he fell in love. 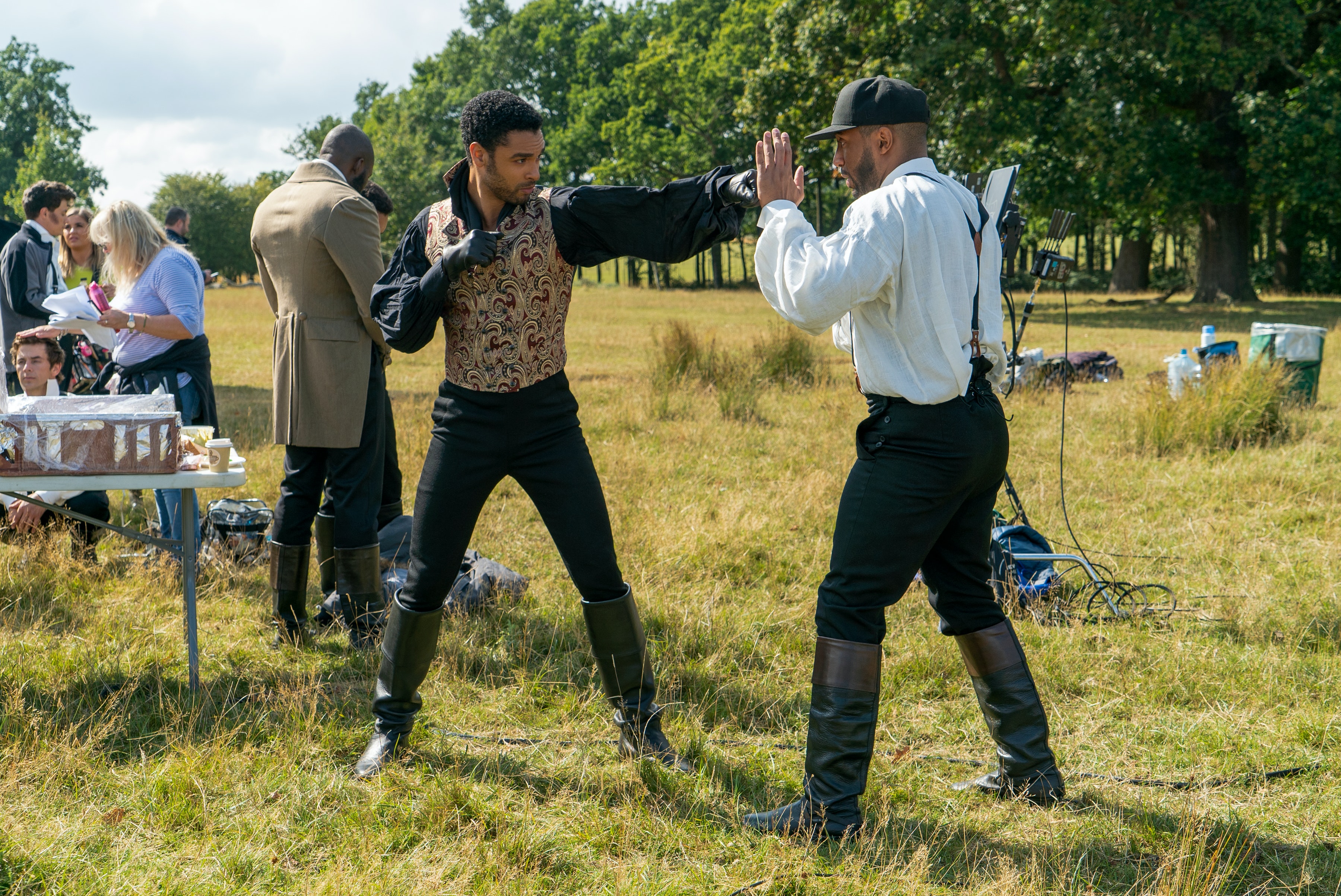 The show did not take putting its characters into the 1810s lightly. As titled families, they would have received formal training in several areas that are no longer part of the modern world. To put the actors into the right mindset, six weeks before filming, they went to boot camp. According to the Welwyn Hatfield Times, the cast was trained in "etiquette, horse riding, dancing, voice lessons, pistol training, and boxing," among other things.

3. ‘Bridgerton’ Has Thousand Of Costumes 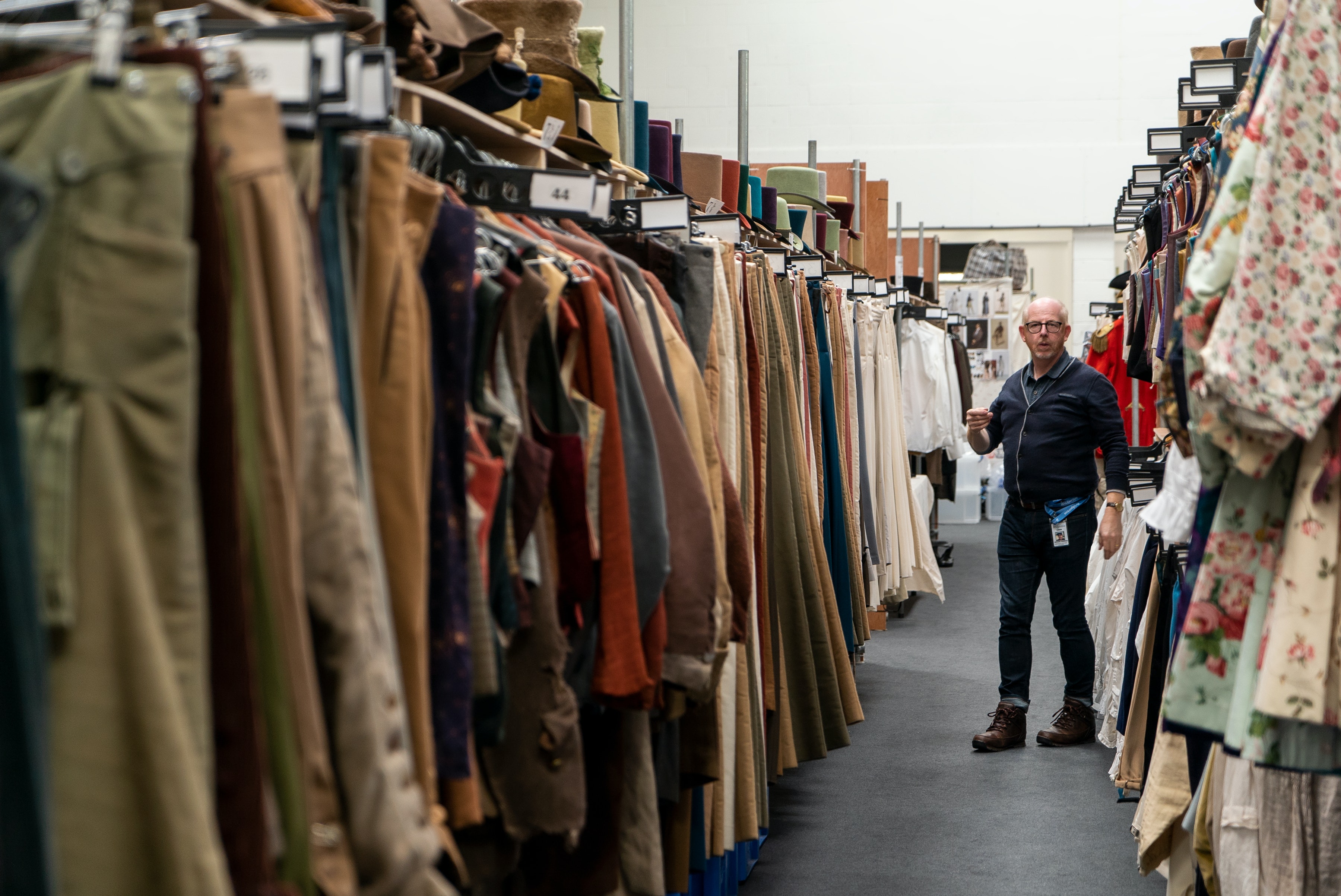 Costume designer Ellen Mirojnick calls Bridgerton "the biggest show of her career." A team of over 230 people built every costume from scratch, a wardrobe that features somewhere in the range of 7,800 outfits. According to IndieWire, everything was handmade. Most importantly, though? No bonnets. 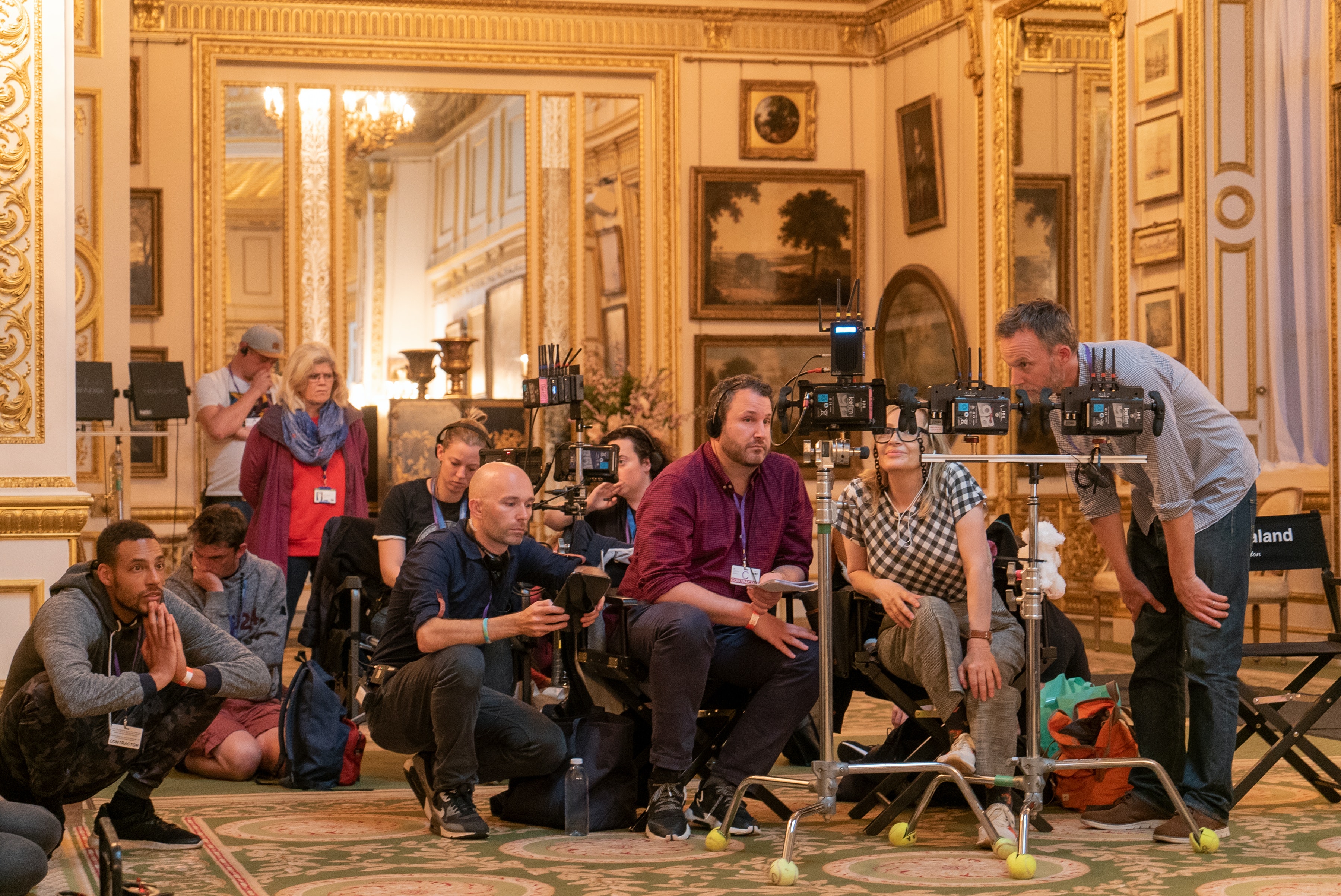 If you think you recognize some of the backgrounds in Bridgerton, you’re not wrong. According to Oprah Magazine, the series is a smorgasbord of locations used in various period pieces. From Hatfield House (where The Favourite was filmed) to Wilton House (used in The Crown), it’s a where’s where of period piece spaces. The series also used the home next door to Prince Charles’ house, featured in several PBS shows, from Downton Abbey to Victoria, and outdoor locations that appeared in Wolf Hall. 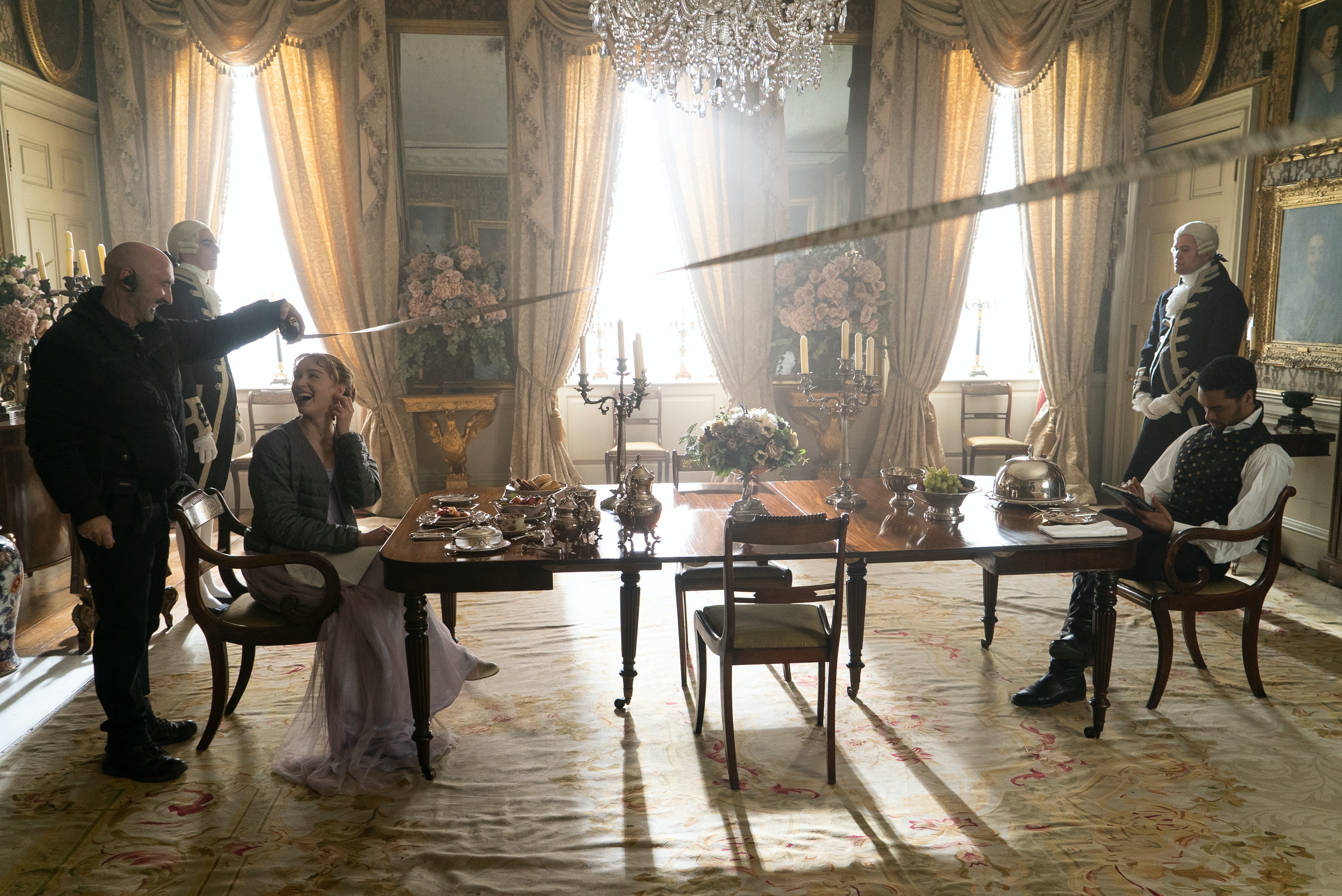 If the onset locations are borrowed, the rest of the sets were decidedly not. One of the show’s conceits is that the dark look of furnishing, which usually characterizes period pieces, is the dirt of ages. In 1813, everything was as bright as if it were newly made. That meant using period furniture was right out, and everything was made from scratch, down to the curtains and carpets. 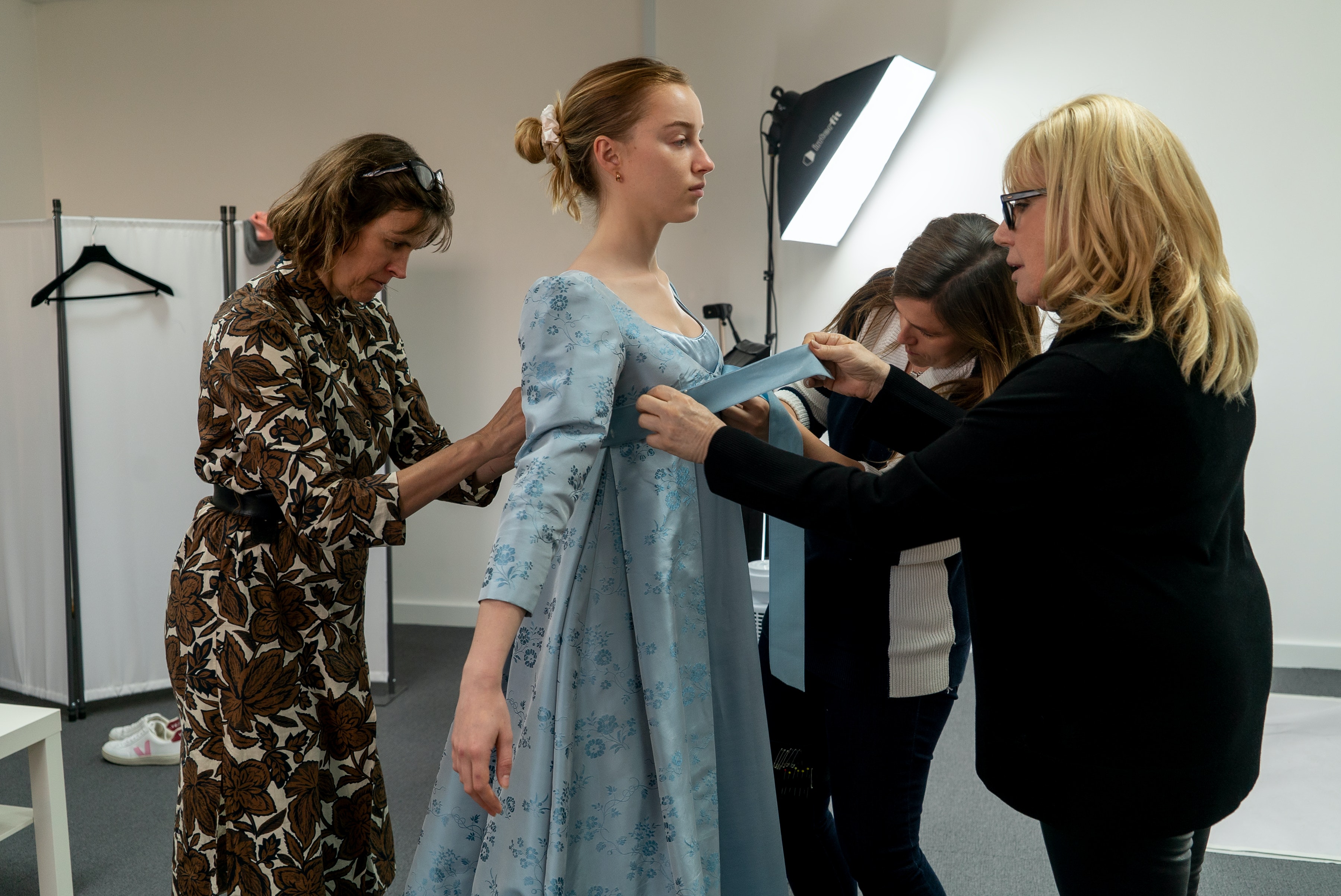 Look carefully, and you’ll notice the show’s main heroine never wears the same dress twice. According to Mirojnick, the leading lady had over 100 dresses alone.

7. The Color Palette Is Deliberately Wedgewood 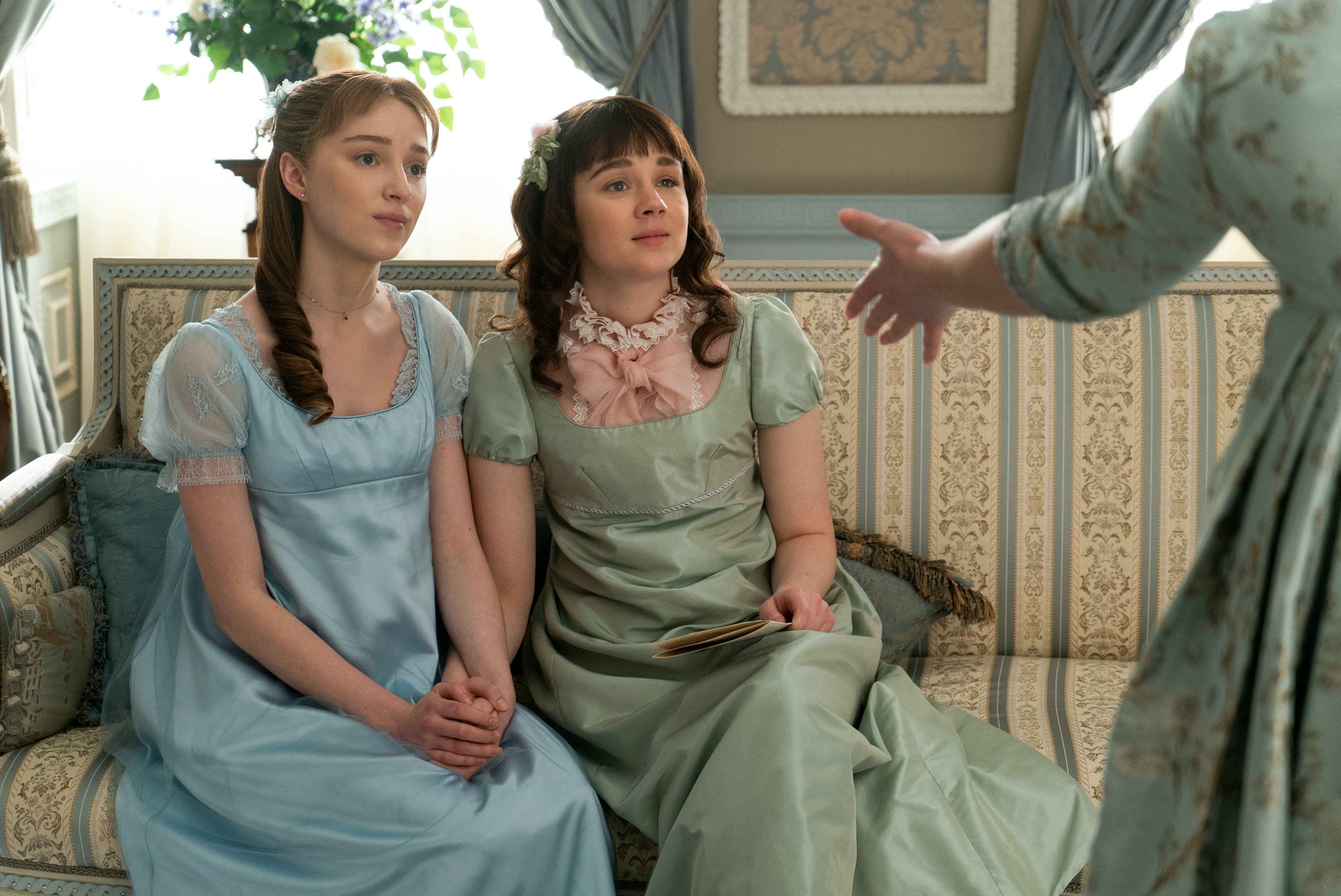 The palette for the Featheringtons can be well described as is "eye-searing and butterflies." The Bridgertons, in contrast, are a cool blue studded with bees. But it’s not just any blue. It’s Wedgewood, the famous English-made bone china that became a staple in the Regency era. 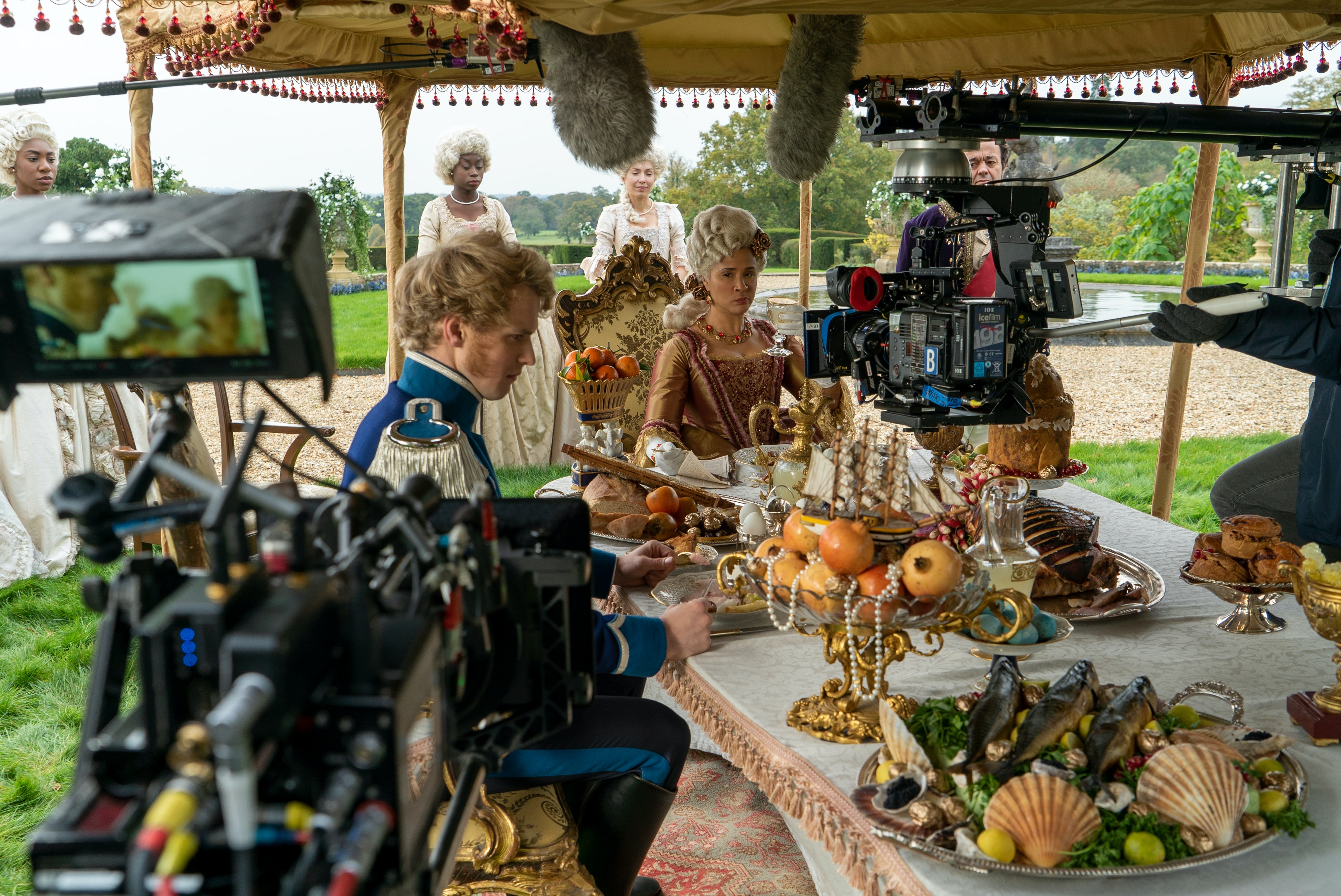 If the heroine never wears the same dress twice, then the Queen must be given one up from that. Not only does Her Royal Highness, Queen Charlotte, wear a different gown in every scene, each one comes with a matching wig. After all, she’s not exactly busy, and dressing the part is all she has since her husband is no longer himself.

9. The Queen Loves Her Pet Poms 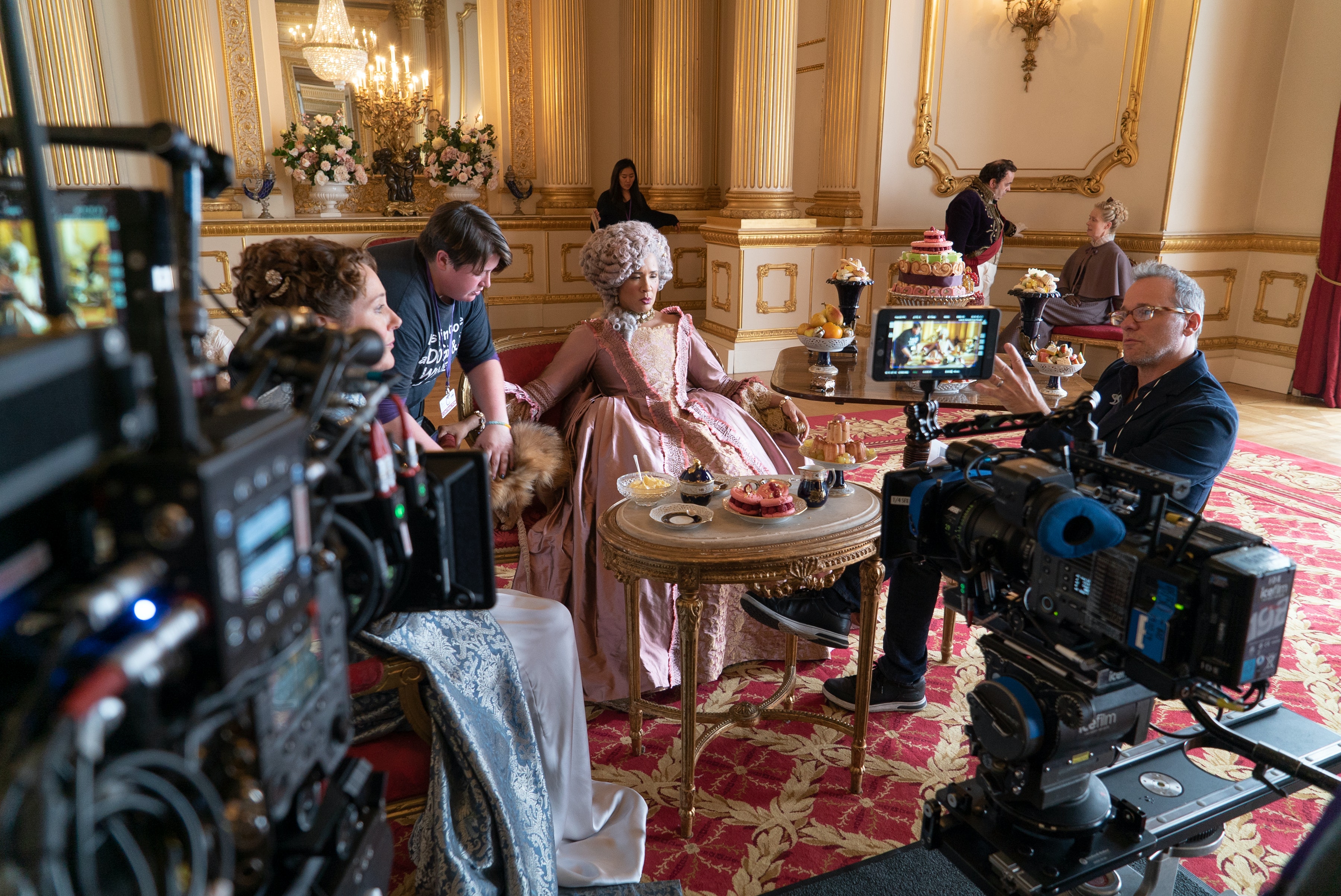 Actress Golda Rosheuvel, who plays Queen Charlotte, had a blast working with her puppies. Apparently, all the dogs had strong personalities, but that’s ok, as so does the Queen.

10. Anthony’s Muttonchops Are His Own 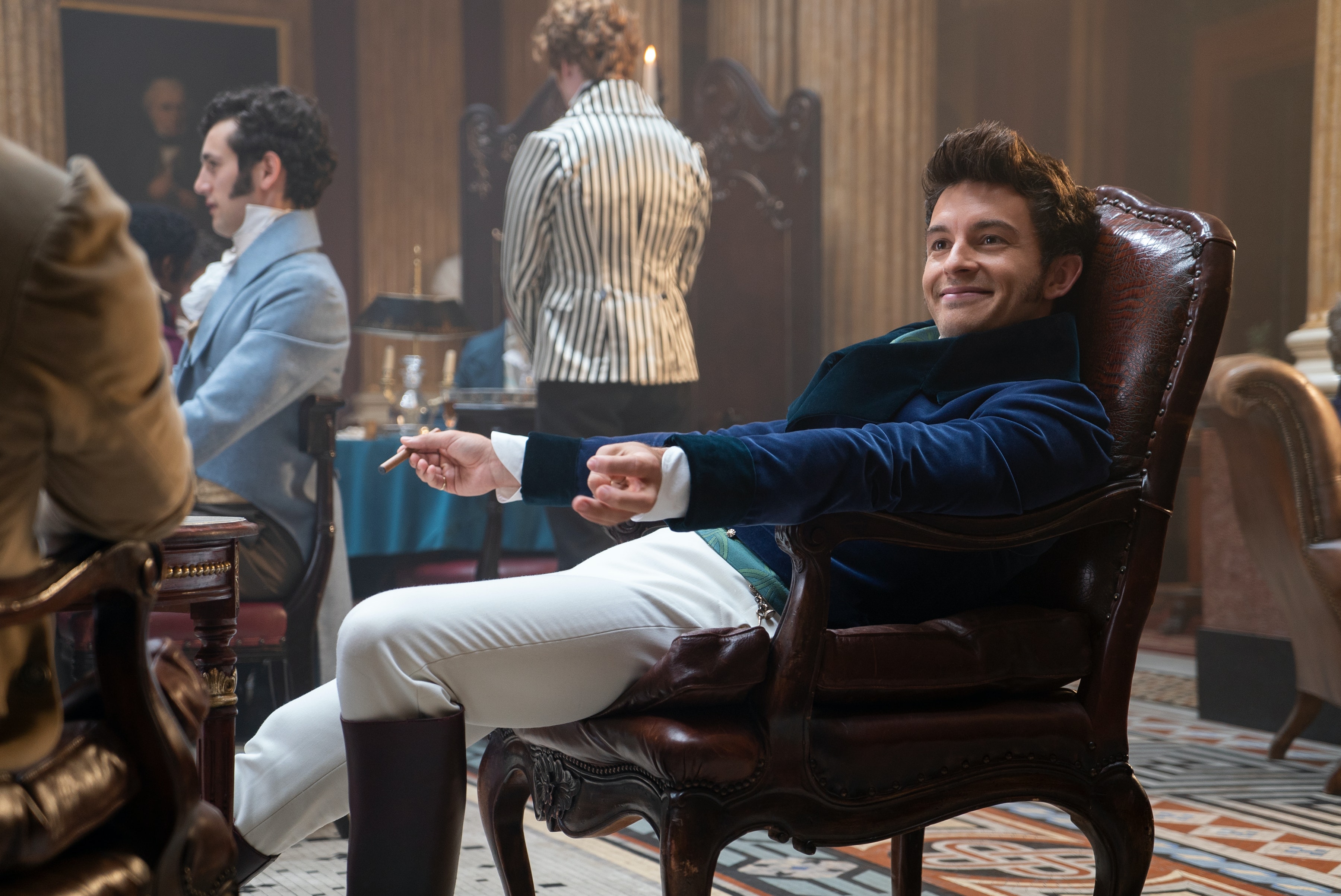 Unlike Lukes Thompson and Newton, who wore stick-on sideburns for their roles as Benedict and Colin, Jonathan Bailey decided to go full method for his period hair and grow his own muttonchops. He regretted it by the end since the look was so hard to maintain. Fans can only hope that if there is a Season 2, Anthony doesn’t shave them off. 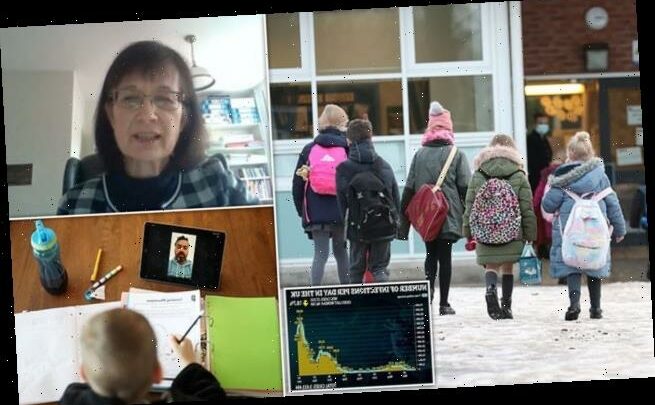 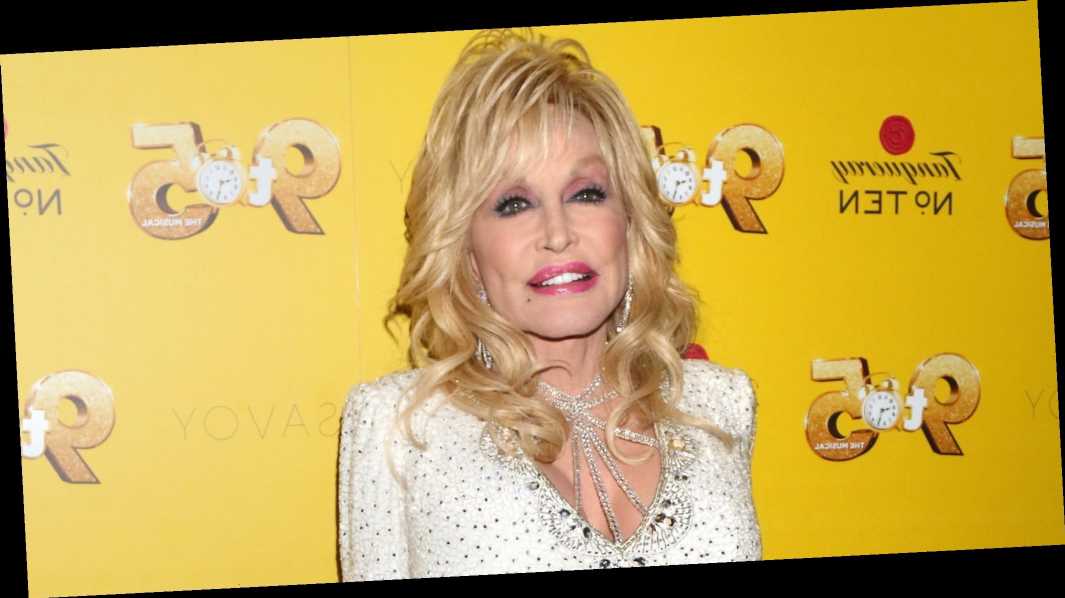 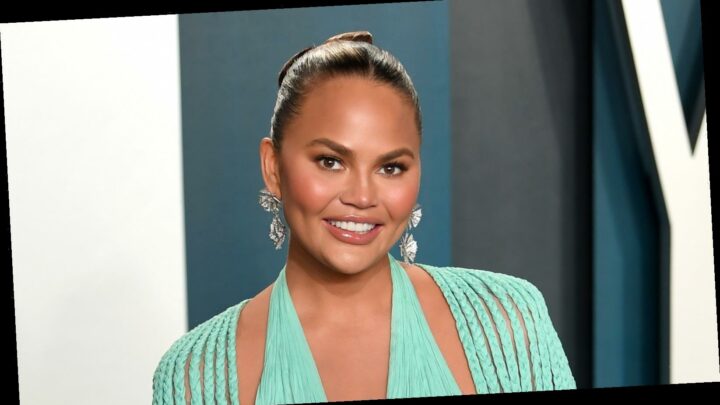