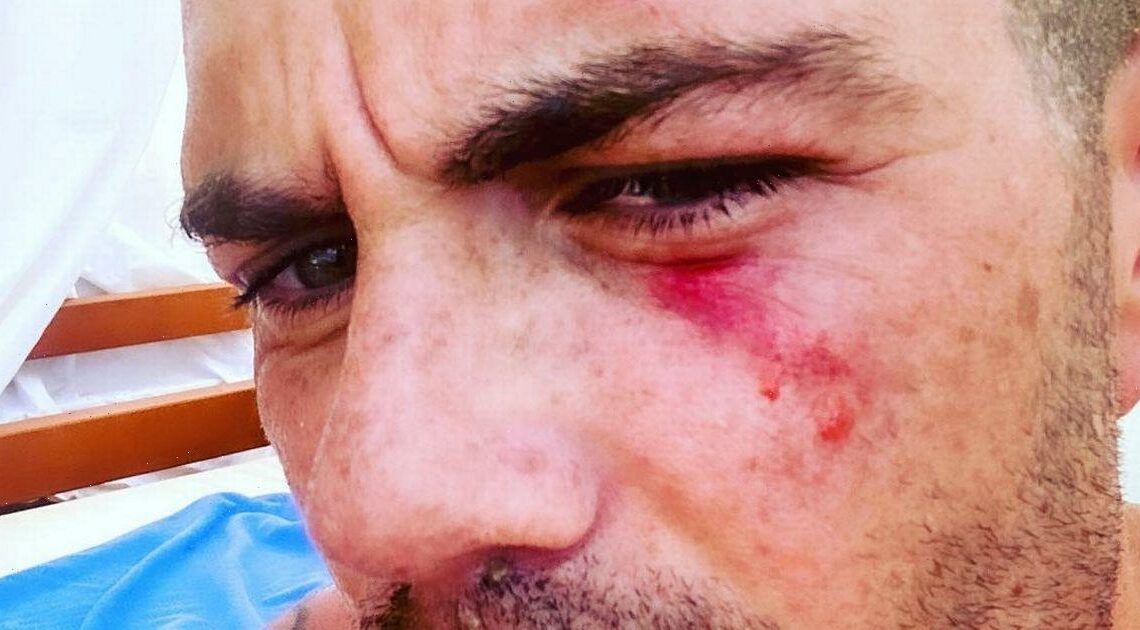 Max George has detailed how he could've been blinded after suffering a nasty accident while on holiday with his partner Stacey Giggs.

The 32 year old, who recently confirmed he's in talks with Coronation Street about entering the soap opera, took to his Instagram stories to share a bloodied selfie before sharing what happened with his 180,000 followers.

The Wanted singer explained that he was lounging outside, soaking up the sun, before deciding to take a dip in the Adriatic Sea to explore more of the aquatic life.

However, the star quickly found trouble as he crashed into a rock in the bottom of the sea, scraping his cheek and hurting his eye in the process.

Posting a snap of the aftermath on his feed, he wrote: "You should see the other guy. (A MASSIVE rock at the bottom of the Adriatic)," followed by a sick emoji and a boxing glove emoji.

Max also remarked how lucky he was to have gotten away with just a few scrapes and bruises.

His former bandmate and pal Tom Parker, who recently shared how "grateful" he is after latest results saw his brain tumour reduce in size, immediately commented: "Getting beaten up by the rock," to which Max responded by sharing three crying with laughter emojis.

Worried fans were also quick to comment as one person wrote: "Oh my gosh I hope you’re okay," with a shocked face emoji and a red heart emoji.

"Jeez what you like hope your ok," another said with a worried face emoji, while a third added: "Bless you. Hope it’s not too sore," followed by a red heart emoji.

It comes after Max recently recalled the devastating moment he was told his friend Tom had been diagnosed with an incurable brain tumour.

Tom, 32, went public with his diagnosis in October 2020, sending shockwaves amongst his fans and friends.

Speaking to Daily Star, Max said: "It was just the shock that it was Tom. I remember the day that his wife Kelsey rang me and I couldn’t get my head around that it was Tom.

"I started wondering why it was Tom and not me. Fighter. I'm devastated, but he's a fighter, and if there is one person who can get past it, it's Tom."

He added: "I don't fear anything any more because I look at where Tom is and what he's got and he's just taking it head on.

"I do look at life differently in terms of anything can happen tomorrow so just make the most of today. Tom has given me a lot of strength.

"He is a massive inspiration and I think he will be to millions of other people."

The hunky singer continued: "He's great. We speak a lot and he is doing way better than anybody could have expected, so everyone is really happy with where he's at.

"They say that he can't recover from his condition, but if there's one person that could, it's Tom. He's a different breed, so 100% I believe he can make a full recovery."

For all your updates on Max George and Tom Parker, sign up to our daily OK! newsletter.

Many Bible Belt preachers silent on shots as COVID-19 surges