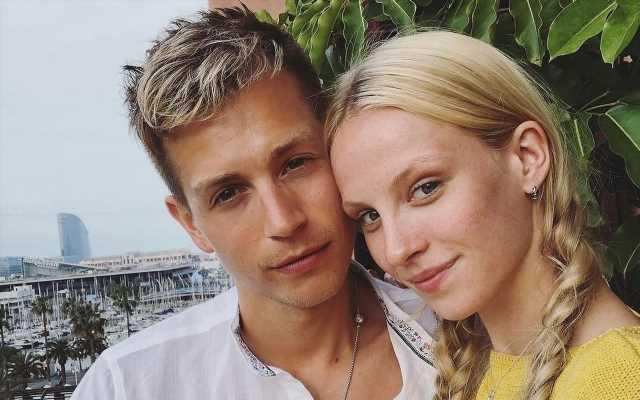 Congratulations are in order for the British musician and girlfriend Kirstie Brittain as the couple officially become husband and wife following romantic nuptials.

AceShowbiz –The Vamps star James McVey is a married man.

The musician tied the knot with his model girlfriend Kirstie Brittain on Sunday (31Oct21) after their big day was delayed due to the COVID-19 pandemic.

Confirming the wedding was able to go ahead with a series of snaps from their special day, James penned, “I never believed the cliche ‘best day of your life’ thing, then it happened.”

Kirstie looked stunning in an off-the-shoulder white ballgown, complete with a white veil, while James opted for a black three piece suit and a bow tie.

Kirstie also posted a snap of the back of her dress, which she revealed was made by Victoria Sanders.

The star previously revealed of their delayed plans, “It is meant for November, but the problem is that the government haven’t really set out any plans for how weddings can go back to normal.”

“Thirty people can be at a reception, but have to be socially distanced,” he added in an interview with Metro. “We have elderly relatives in Liverpool who would have to travel down to Dorset where we’re getting married.”

“Kirstie and I are thinking it’s best to postpone it until Halloween next year.”

The wedding came a week after the groom celebrated the tenth anniversary of his band. “What a whirlwind we’ve been on. Wouldn’t trade it for the world. Thanks B, and also T and C for everything,” he gave his bandmates a shout-out. “The Vamps will always hold such a special place in my heart.”

When he got married, pals Connor Ball, Tristan Evans, and Brad Simpson served as his best men.