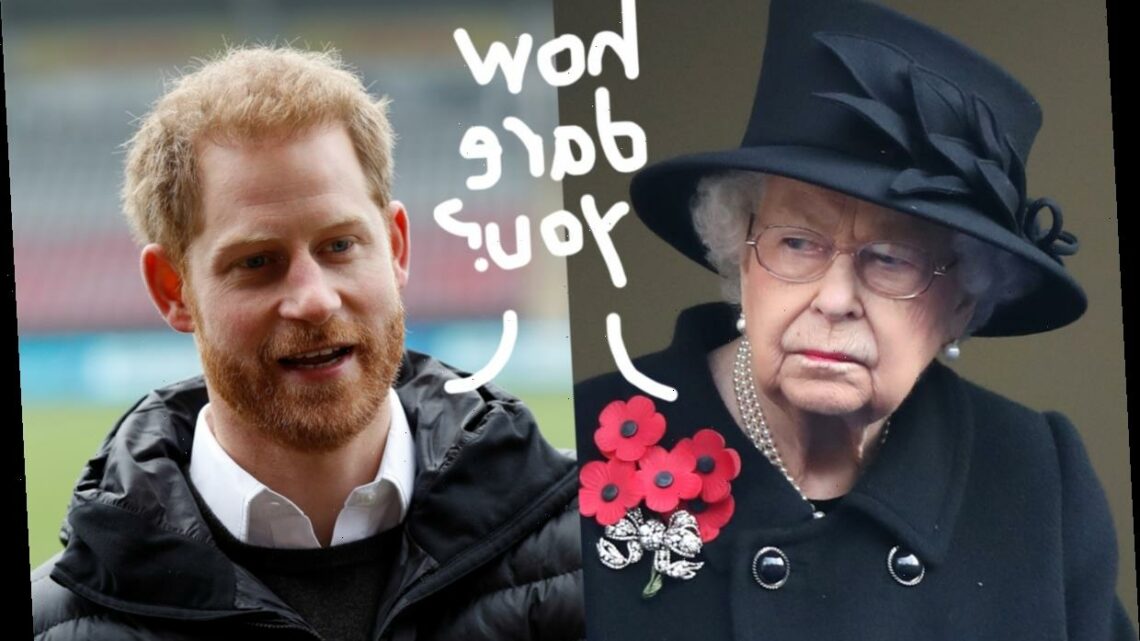 The REAL Reason Prince Harry & Queen Elizabeth Are So Upset!

Not following the latest Royal drama? Thought Megxit was all over with a year ago? Not sure why either side is upset?? We’ve got ya covered!

You’ve probably heard the rift between Prince Harry and Meghan Markle and the rest of the Royal family has seemingly been ripped right open again. The reason for that is we finally hit the end of the one-year “review” of Megxit — kind of a trial period to make sure the Duke and Duchess of Sussex were sure they wanted to step away.

Well, they’re sure alright. By all accounts they’re flourishing here in California, even amid the pandemic. They’re establishing connections, making deals, and clearly getting busy in other ways — considering they’re expecting their second child.

But continuing that happy existence outside the fam meant reaffirming the breakup, which they did in an official announcement — hence the reopening of old wounds. According to sources speaking to Us Weekly, this has all been especially tough on Queen Elizabeth II:

“It’s been a rough few weeks for the queen, that’s for sure. The situation with Harry and Meghan has been challenging, and on top of that, she’s distraught over her beloved husband’s health setback.”

If you hadn’t heard, the normally untiring Prince Philip has taken ill, being hospitalized and treated for an infection last week. He’s a strong guy, but he’s also 99 years old, so… stressful times. Add to that the fact it seems the Queen sincerely hoped Harry would change his mind! Another source told the outlet:

“The queen has had some tearful moments mixed with anger and disappointment. Emotions are definitely running high.”

It’s not just being rejected — it’s also missing her family, who are isolated a world away. Especially that ginger grandbaby! They explained:

“The queen has FaceTime calls with Archie, but it’s not the same.”

The insider says Her Majesty is “desperate to give Archie a huge hug.” Awww! Perhaps it’s that pain that’s behind her statement? See, after the Sussexes’ choice, in her official statement declaring Megxit was indeed permanent the Queen said a couple other things as well. First, the pair would not be able to keep their Royal patronages, something we were led to believe at the start of all this that they would.

That includes Prince Harry’s beloved Invictus Games, the sporting competition he set up for sick and injured armed services personnel. That was particularly close to his heart due to his own military service.

A source told People Meghan and Harry were quite “disappointed” they didn’t get to keep their royal patronages and military appointments.

The other thing the Queen did was add insult to injury by — in her majestically shady way — suggesting that in leaving the Royal family the couple were turning their backs on charity!

“…The Queen has written confirming that in stepping away from the work of The Royal Family it is not possible to continue with the responsibilities and duties that come with a life of public service.“

See? She’s basically suggesting they did all this out of selfishness! If you didn’t catch that one, we don’t blame you. The woman makes statements with her broaches. She’s nothing if not subtle.

It was that very sentiment the Sussexes hit back at, pointing out they were still committed to charity and good works because “service is universal” — AKA not trademarked by the British Royal Family, as could easily have been read in the Queen’s statement.

Despite this statement being on its surface merely a philosophical disagreement and not a personal one, it still meant — very politely, mind you — rebutting THE QUEEN.

It was this act of defiance that Prince William reportedly found so “insulting and disrespectful.”

People‘s insider said Harry and Meghan ultimately “they respect the decision that was reached” by Her Majesty and would not have pushed back in their statement if the wording of the Palace’s statement had specified “Royal service” and not implied one had to be a Royal to be do good works. As it stands it does seem worded specifically to imply the kids have become more selfish.

However, despite all the new feuding, a confidant insisted to the outlet all will be right again, affirming:

“There is a very strong family bond.”

Well, we shall see. Certainly they are all still family. And that will never change — no matter where they choose to serve the public. Right?