Home » Celebrities » The Internet Has a New Boyfriend 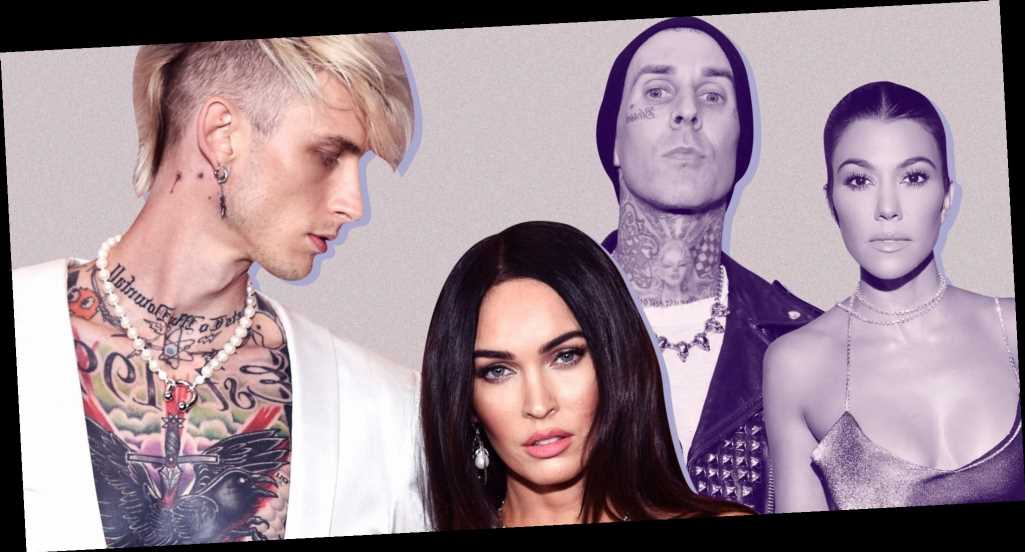 The Internet Has a New Boyfriend Kardashian scholars will know that Barker and the influencer live on the same block in Calabasas and have been friends for years — Barker once had his own reality TV show Meet The Barkers and has appeared on several Keeping up with the Kardashians episodes. But "Kravis" are still an odd pair. Barker, with his skinny jeans and '00s-era band. Kourtney, with her collagen lattes, pleather pantsuits, and family who invented modern stardom. Blink-182 fans seem like the type to mock the Kardashians. Kardashian fans don't seem like the type to know who Barker is. He was a punk, she did Pilates on Instagram, etc.

I might have been even more surprised by Kravis if, six months ago, a different household name hadn't fallen for a scrawny musician with a body sleeve and mohawk. In May, news broke that Megan Fox was leaving her husband of ten years, 90210 actor Brian Austin Green, for Machine Gun Kelly, fresh off his transformation from scumbro rapper to modern mall-punk. Notably, Kelly has become a protegé to Barker, who produced and co-wrote his new all-pop-punk album Tickets To My Downfall. In May, just days after Green shared a stock photo of a butterfly captioned, "Eventually butterflies get bored sitting on a flower for too long… It's a great big world and they want to experience it," Fox appeared as a dominatrix in the music video for Kelly's single "Bloody Valentine." Within a few months, they were walking red carpets, feuding with Green online, and fending off engagement rumors.

Fox is leaning into her new rock chick hype-girl persona. "Achingly Beautiful Boy… My heart is yours," she promised on Instagram. She was backstage in a snakeskin jumpsuit at Kelly's SNL debut, dubbing it unironically the "best performance that show's ever seen." In a striking Valentine's Day poem, she called him her "rehab barbie" and "a creative genius" among other adjectives. Kelly upped the ante: "I wear your blood around my neck," showing off a pendant encasing a red droplet. Or, he tried. In Nylon, Fox called their connection one of "mythic proportions," saying "loving him is like being in love with a tsunami or a forest fire."

The relationship has given both parties new relevancy. Fox was poised to become the next Angelina Jolie before she was bullied out of Hollywood in the late 2000s. Recently, she's been been reappraised as a part of the "sex-positive bisexual icon that we didn't appreciate at the time"-industrial-complex. Until this year, Kelly was best known for feuding with more famous white rappers and a bromance with Pete Davidson. Was he the one Halsey dated? No one could remember, at least until Fox got his name tattooed along her collarbone.

A few years ago, these couples would have represented major collapses in the celebrity pecking order. Back in the day, models, rappers, athletes, or maybe an acclaimed director typically made the most appealing mates for household names like Fox and Kardashian. However, I suspect Barker and Kelly won't be the only pop-punk boyfriends on our feeds for long.

When Tickets To My Downfall dropped this September, it debuted as Kelly's first No. 1, and the first rock album to top Billboard Hot 200 in over a year. Rappers like the late Lil Peep and JuiceWRLD discovered the magic of nasally singing about being a big fuck-up years ago. Over the last couple years, through the gateway drug of "E-boys and E-girls," this trend has given way to a full-blown pop-punk revival. This scene has been partially architected by Kelly and Barker, who've taken a clique of Gen-Z celebrities under their wing and are helping turn them into rock stars.

Even TikTok's queen bee, 16-year-old dancing influencer Charli D'Amelio has a pop-punk man on her arm. Chase Hudson, aka Lil Huddy, starred in Kelly's album film Downfalls High across from Euphoria breakout Sydney Sweeney — who might just be the Megan Fox of her generation. Hudson signed with Interscope last year and recently dropped his first two singles produced by Barker. E-boys were always a bit goth with their earrings and painted nails, but the 18-year-old's gone full Hot Topic in "21st Century Vampire," a bizarre pill of Gen-Z nihilism dissolved in a Gen X-invented sound. "Dark circles under my eyes/ No sunlight up in my sky," Huddy drawls, laying in a coffin. "Teenagers, they really dig this shit," Hudson told Paper of pop-punk, adding that Kelly and Barker are "paving the way for all these other musicians… [to create] the new era of pop-punk."

It goes beyond Kelly and Barker's brat pack. Hyperpop stars 100 Gecs recently collaborated with Linkin Park and Fall Out Boy, while Rebecca Black released a remix of "Friday" with 3OH!3.

With the biggest teen star in America dating a guy who sounds like My Chemical Romance, the pop-punk boyfriend's takeover feels imminent. This new era has been a long time coming. Dating a rock star never goes out of style, but pop-punk hasn't been cool for a decade. Warped Tour warped its last in 2013. Bands like Blink-182 and Fall Out Boy continued to release poorly selling albums, but pop-punk disappeared from festival bills and the public eye, except for the occasional pan review or contribution to UFO research. Hayley Williams went solo and started making experimental pop. Delicate, sexually fluid softboys from Harry Styles to Jaden Smith reigned over pop culture, making pop-punk's flavor of aggrieved yet macho masculinity feel corny, suburban and out of touch. In particular, the Warped Tour scene has been scrutinized for the misogyny and predatory behavior that took place under the banner of counter-culture.

Apparently, culture has grown weary of tepid softboys, with their irony and tote bags full of Joan Didion. We've all seen the Cole Sprouse Riverdale "I'm weird" meme. We now know guys in cuffed pants are no more woke, sensitive or authentic than your average quarterback. The softboy's been unmasked, just like the pop-punk bro once was. As Cosmpolitan wrote last year, "Simply put, soft boys are just fuckboys in disguise." It's not like Fox or Kardashian were sliding into Vampire Weekend frontman Ezra Koenig's DMs a few years ago. But the world is now ready to root wholeheartedly for a guy like Machine Gun Kelly. Tabloids have dubbed Kravis 2021's first "It couple." Fox and Kelly's online PDA has become an internet obsession.

There are plenty of explanations for why pop-punk has returned. We're living in dark times! The isolation of quarantine calls for power chords! But even if pop-punk wasn't back in fashion, the notion that couples like Fox and Kelly or Barker and Kardashian are a "glitches in the simulation" feels outdated.

If their names seem paired from a pop culture grab-bag, it's because the internet functions just like one. Having a discernible online brand is more important than ever, yet the tribes of the internet feel more and more arbitrary and porous. These days, I find it nearly impossible to keep straight the aesthetic preferences of softboys, E-boys, himbos, pop-punks, hipsters and normies, no matter how many starter pack memes I look at. I've lost track of who got famous online versus in a band, who's from the movies and who's from Instagram.

The internet has liquefied mainstream and alternative, highbrow and lowbrow, online and offline, A-list and Z-list into a sloppy pop culture soup — and one dating pool. Transgressing these lines isn't just not taboo for celebrities, it's celebrated. We cheer on as Instagram models read alt-literature, indie rock stars walk runways, and queer rappers release country music. When there's clout to be gained by dating across cultural lines, is there really anyone we should be surprised to see a Kardashian date?

Your Tarot Reading for the Astrological New Year, by Zodiac Sign