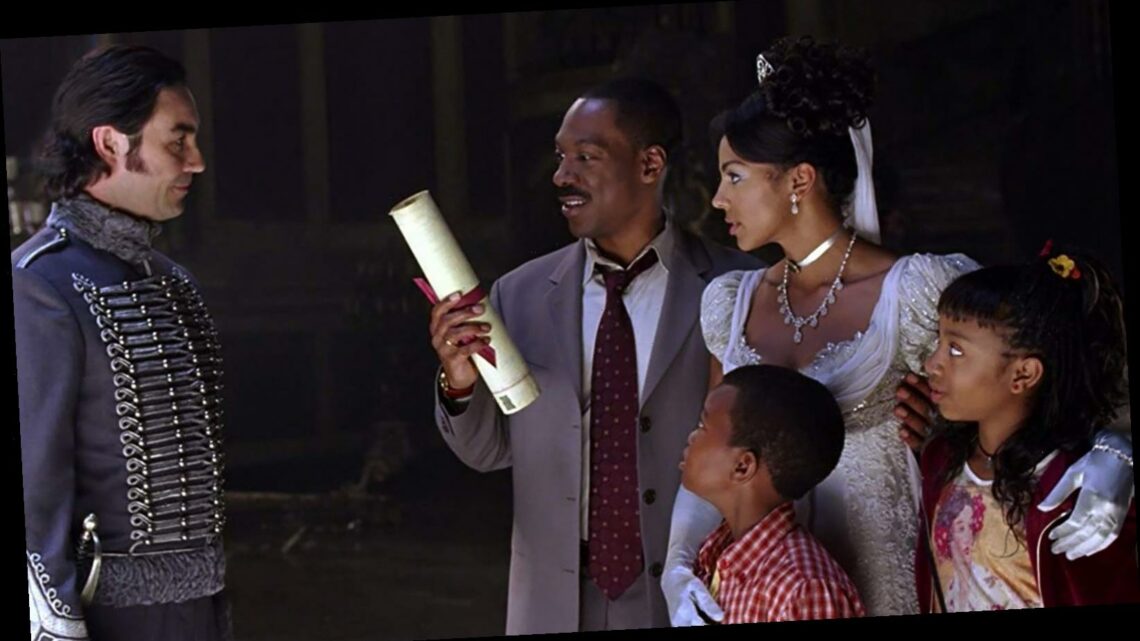 The Haunted Mansion Moments Only Adults Seem To Notice

The Haunted Mansion is a Disney classic for a reason, combining laughs and a serious fear-factor to make the perfect family-friendly (yet creepy!) movie. Fans around the world still gasp at the sight of the haunted Louisiana mansion, housing all kinds of ghostly apparitions, curses and magic — but the kid’s classic has a bunch of made-for-adults Easter eggs, too (via Looper).

As Jim (Eddie Murphy), his wife Sara, and their kids race against the clock to break a years-old curse, they help the servants at the mansion — and find out a few things about themselves to become closer as a family (via IMDb). Although the film seems pretty simple at first sight, with a few die-hard fans pointing out the major Disneyland and Disneyworld references (Beauty and the Beast, anyone?), it’s actually far more complex than you’d think. Far away from just otherworldly ghosts, the movie includes several downright-sinister references that are worth a second look.

According to Looper, the Halloween movie actually has a full-blown mythology behind it that only adults can notice — and yeah, we’re shook. The main Easter egg has to do with the ghosts that float around the manor, who become more “dead” as they get further away from the main house. That’s the reason that the ghosts in the mansion look like humans, such as the butler Ramsley and the owner Edward, but the cemetery-dwelling ghosts are blue and spirit-like. Although the premise seems simple, it’s anything but.

All the Easter eggs you probably missed in The Haunted Mansion

Because The Haunted Mansion features a ghostly horse that always keeps a skeleton form no matter where it is, as well as a barbershop quartet, fortune teller, and zombies that always look spirit-like even in the house, it’s safe to say there’s a ghost hierarchy within the mansion. This fact essentially politicizes the movie (via Looper).

Apart from ghost hierarchies, another Easter egg is the film’s race element. The whole reason the mansion dwellers are cursed is because Edward fell in love with his servant Elizabeth, leading butler Ramsley to poison her so the union couldn’t happen. Edward then took his own life as well, cursing the house. The center of the curse is actually racism, since Elizabeth being mixed-race is what made Ramsley want to prevent the marriage.

Apart from the symbolism, there are also several plot-holes in the movie. For one, the fact that no one had ever tried to find out more about Gracey Manor, even with its size and location in a well-off area (unless the curse makes it invisible). Even more, the servants cook real food — making us wonder how they go to the grocery store — and the Evers family receives the deed to the mansion, even though it would’ve been handed over to the government after Edward’s death (via Looper). We’ll always love the movie, but the Easter eggs and plot-holes are leaving us reeling and scratching our heads in equal measure.