Home » Celebrities » The Duggars Are Over: The Threat of Toxic Purity Culture Hasn’t Gone Away 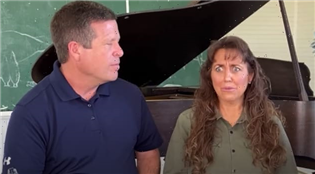 The Duggars Are Over: The Threat of Toxic Purity Culture Hasn’t Gone Away

The toxic Duggar media empire has been destroyed by Josh’s well-deserved conviction, and an upcoming documentary stands to rub salt in the wound.

This is a good thing. The Duggars and those like them need to be exposed.

But Jim Bob’s disgrace does not mean an end to the IBLP cult or to the toxic subculture that ruins lives.

The threat that the Duggars have always represented remains.

For too many people, Josh Duggar’s conviction was the beginning and the end of their issues with the Duggars.

This is not their moral failing alone — they have seen a sanitized, marketable version of the extreme beliefs and lifestyle of the family.

TLC and Jim Bob worked hard to make their family seem quirky instead of abusive, sincere rather than part of a threat to human rights.

For millennia, there has been a pernicious practice of twisting sincerely held religious beliefs to hurt people.

It is especially sinister when the people being hurt are women and children, told by abusive cults that they are nothing but property.

We know what it means to grow up a Duggar in the IBLP cult. We grieve for its countless victims, including every single Duggar child.

But they are not alone — just one of an alarming number of families who are part of radical fundamentalist groups.

The issue is not the sincerety of their faith.

The issue is the abuse, the obsessive control that robs their children of a lifetime’s choices, and the dangerous politicization of their religion.

For nearly half a century, white evangelical Christianity has been weaponized in the American political arena.

Christians as a whole make up 65% of the United States population, their symbols and beliefs enshrined on public monuments and in courthouses.

Despite being two-thirds of the populace and claiming every President in our nation’s history, some Christians claim to be oppressed.

Promoting a false fear of extinction is a useful tactic for motivating a large base of people.

In the case of white evangelicals, the narrative that their beliefs are “under attack” is used to generate money and political power.

Toxic purity culture holds that human sexuality is inherently evil, that women’s value is inherently tied to sex and reproduction.

Fundamentalists take gender roles and sex negativity (like everything else) to further extremes.

The Duggar brand embodies patriarchal values — with Jim Bob’s wife and unmarried children essentially being his property until married to a spouse that meets his approval.

But that was never the focus of the Duggars when they appeared on TLC.

Instead the focus was their silly clothes (required due to strict guidelines of the cult), bad hair (favored by cult founder Bill Gothard), and those oddball “courtship rules.”

On social media, many of the Duggar daughters act mostly like normal people — smiling in photos, showing off haircuts, and announcing pregnancies.

All of this helped to water down the Duggar image, making them seem less “extreme” and more “ultra-traditional.”

The reality is that many of those who viewed the Duggars on TLC were exactly the sorts of people whom the Duggars see as enemies.

Non-Christians, LGBTQ+ viewers, anyone who has been divorced, and even Christians who aren’t as strict as they are … all part of the “corrupt” mainstream.

Josh was a major crack in the facade that Jim Bob and TLC constructed.

It wasn’t just that he was a sexual predator who assaulted young girls at home.

It was that Jim Bob helped to cover it up for years. It was that the church and cult were an ideal stalking ground for a monster like Josh.

The Duggars wanted to sweep all of this under the rug.

Two of Josh’s victims — his own sisters — were trotted out on television (Fox News, of course) to insist that he wasn’t really a predator.

Those poor girls probably believed that at the time — that sexual predators were something in the outside world, that Josh had just made a mistake that was their fault.

They also tried to classify this as spiritual warfare, or at least as a spiritual crisis in their family instead of the crime that it was.

There are Christians who might see a sexual predator as being under the influence of literal, spiritual evil. That’s part of their theology.

However, the Duggar spin on things seemed to be that the world learning the truth about Josh was the work of the devil.

But Josh was not just one bad apple seeking to spoil the bunch. The Duggars never needed Josh’s help to be dangerous.

His scandals (and now conviction) are just a canary in the coalmine signaling the real danger of these extreme cults.

A group that believes that fundamental human rights run counter to their beliefs should not continue to be portrayed as harmless eccentrics on TLC.

Everyone has a right to their sincerely held religious beliefs — even the Duggars. They just can’t use that faith to hurt people.

No one has a right to deprive others of their human dignity and basic rights.

These may sound like self-evident truths, but to Jim Bob and those who share his views, human rights are anathema.