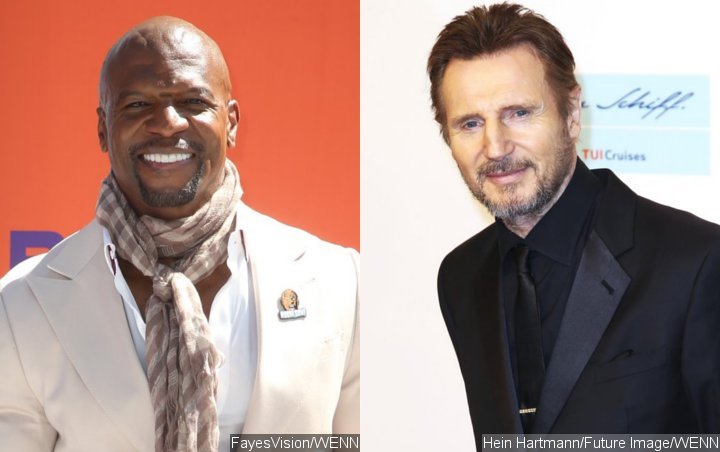 AceShowbiz –Terry Crews has recently landed in hot water after he appeared to be defending Liam Neeson, who is currently receiving massive backlash for his comment about wanting to kill a “black bastard.” Taking to his Twitter account, the “Deadpool 2” star saw a different side in the disgraced actor’s comment.

“I believe that every person on earth is capable of the greatest good, or unspeakable evil. Liam is just describing his fork in the road,” Crews wrote, before people started calling him out for appearing to defend Neeson. Among them was rapper Wale, who said, “Na. No. Nope. Liam is trash. We losin Brothers all the time because of this proverbial ‘fork’. Na fam.”

Crews later offered up a response. “So what are we gonna do, @Wale?” he wrote, to which the rapper retorted with, “I know what we not gon do, Terry.”

The criticism didn’t subside over time, so in response to the backlash, Crews insisted that he wasn’t defending Neeson at all. “This is why reading comprehension is so necessary in school,” he hit back. “I never defended Liam Neeson. Still don’t.”

Stressing once again that he didn’t come to the “Taken” actor’s defense, he added in another tweet, “I’m not defending him at all. In fact, he absolutely revealed what births a white supremacist. But what’s worse is those who practice it and NEVER reveal it.”

Neeson himself has already apologized for the comment he made after learning his close friend was raped by a black man. During his appearance on “Good Morning America“, he said that his comment was taken out of context and insisted that he’s not a racist.

“I never felt this before, which was a primal urge to lash out,” he said. “I asked her, ‘Did you know the person? It was a man? His race?’ She said it was a black man. I thought, ‘OK.’ After that, there were some nights I went out deliberately into black areas in this city, looking to be set upon that so I could unleash physical violence. I did it for maybe four or five times. It really shocked me, this primal urge I had. It shocked me and it hurt me. I did seek help. I went to a priest. I had two very good friends I talked to, and believe it or not — power walking — to get rid of this.”

He went on saying that he would do the same if he learned that the rapist was a white man. “I was trying to show honor and stand up for my dear friend in this terrible, medieval fashion,” he explained. “I’m a fairly intelligent guy and that’s why it shocked me when I came down to Earth after having these horrible feelings. Luckily, no violence occurred ever.”