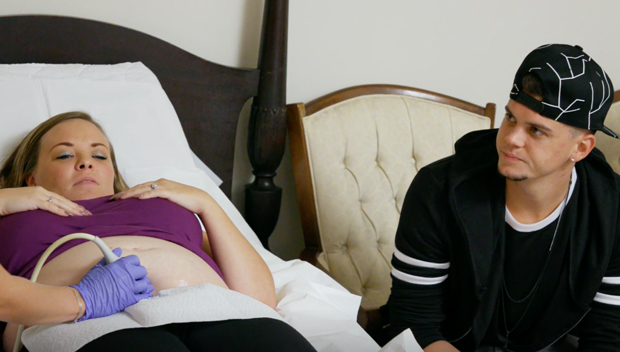 Tyler and Catelynn are still planning for their 1-month separation, but they’re also prepping for the birth of their third child. And on the Dec. 3 episode of ‘Teen Mom OG’, their family reacts to it all!

Despite their impending (and hopefully temporary) separation, Tyler and Catelynn attended her ultrasound appointment during the Dec. 3 episode of Teen Mom OG. First, they marveled over how fancy the 4-D ultrasound clinic was, and then, they saw their unborn child on the screen. Catelynn’s mom tagged along for the visit too, and she seemed thrilled by the new image of her unborn granddaughter. But what she didn’t seem too pleased by was the name Tyler and Catelynn have chosen to give their third baby. When the ultrasound tech asked Tyler if they had considered a name, he was quick to say, “Tezlee.” As we said, April looked less than pleased, but the tech said it was “cute”.

Despite the good news and momentous occasion, Tyler and Catelynn shared that they still plan on taking a one-month separation from each other. They’re just waiting for their new home to be done before they do it. Tyler still feels that it’ll help them. He also told Butch about how he thinks about what it’d be like being with other women, which was kind of awkward considering Catelynn already expressed fears about him cheating. “You’ve only been with two women, you’re 27 years old. Does that play a factor with your…do you think about that?” Butch asked Tyler. “Do you think about, ‘Man, I wish I would have been with more women?’” Tyler said “Yeah.” Tyler’s sister also shared her feelings on the separation, saying, “I don’t know how I feel about that.” But once Tyler defended his decision, Amber Baltierra praised him for being “courageous.”

Meanwhile, Mackenzie and Ryan welcomed their first baby into the world. But because Ryan’s still in rehab, he had to watch the birth via Skype. Cameras didn’t go into the hospital, but Bentley was there, and after the birth, he told Maci and Taylor all about it. Maci was also thrilled because she just wants her kids to have a big healthy, happy blended family.

Later, Amber and Kristina joined forces to show Leah how to shave her legs. Leah had been getting self-conscious about the hair growing on her legs and only wearing long pants to school, so Amber wanted to do something about it. And then she voiced to Gary and Kristina about how much it hurts her when Leah says she’s “too busy” to spend time with her. But according to them, Leah does the same thing with them.