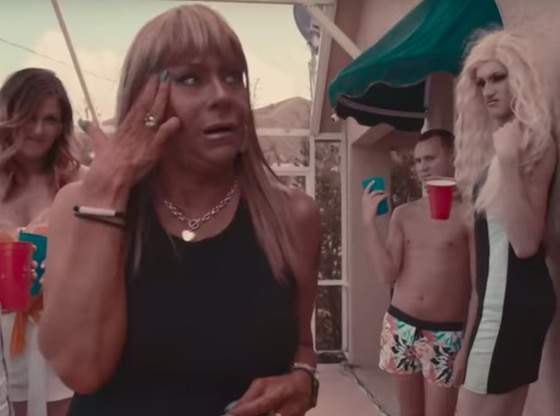 Raise your hand if you agree with the looks on the faces of the dude and his drag queen friend behind her. Infamous early aughts scorched jerky mess Tan Mom (aka Patricia Krentcil) has returned from whatever dangerously overpowered tanning bed in which she had secreted herself. She’s here to wow us with her signature style once more! She’s got a new persona (“Patricia Marie”), a new wig, and a new autotune confection (“Free 2 Be Me”). Unfortunately for Patricia, she’s retained the same unsteadiness about her which can only be permanent sunstroke, and the same horrible enabler, “producer” Adam Barta. Let’s get into “Patricia Marie” and her new anthem for the overly pan-fried in the face and body.

“Free 2 Be Me” kicks off with Tan Mom dressed in a youthful outfit and arriving at that evil queen Adam ‘s “house”. (You know that most of those people are squatting there.) Tan Mom wants to rebrand herself as “Patricia Marie.” Before you can say “let’s just film it on my old iPhone 3GS,” Patricia Marie is making her debut among the haters at the saddest-looking pool party you’ve ever seen. I think I saw my uncle there. And he’s dead.

Tan Mom looks dazed as Adam Barta tries to steal her spotlight while dressed as a cult leader. They serve you some Eyes Wide Shut while walking in the pool wearing masks. (Look at this woman, Adam, you asshole. She’s unsteady. She could have drowned.) Patricia tries to jerk off Barta’s microphone. And the constant chanting of “Tan Mom! Tan Mom!” sounds like they’re chanting “Tampon! Tampon!” And let’s be real, there’s no need for one of those because there hasn’t been anything moist about this gal since 1987.

As for the track, The Blast reports:

Producer Electropoint also worked on the project down in Florida, and we’re told the video sponsor, Area 1, is so happy with Patricia’s performance that they are in negotiations to make her the face of the entire company.

If they’re going to make Patricia the face of the entire company, they’re probably going to need to put a “5” in front of that “1.”

In other news, a graveside service for Auto-Tune will be held at Woodlawn Cemetery in the Bronx next Friday. Because these two finally killed it dead. How many levels of auto-tune did they use? Farrah Abraham’s “Blowin’” crossed with Rebecca Black’s “Friday” couldn’t best “Angry, elderly android with strep throat dueting with a gay chainsaw.”

Orbiting, Another Thing for Online Daters to Worry About