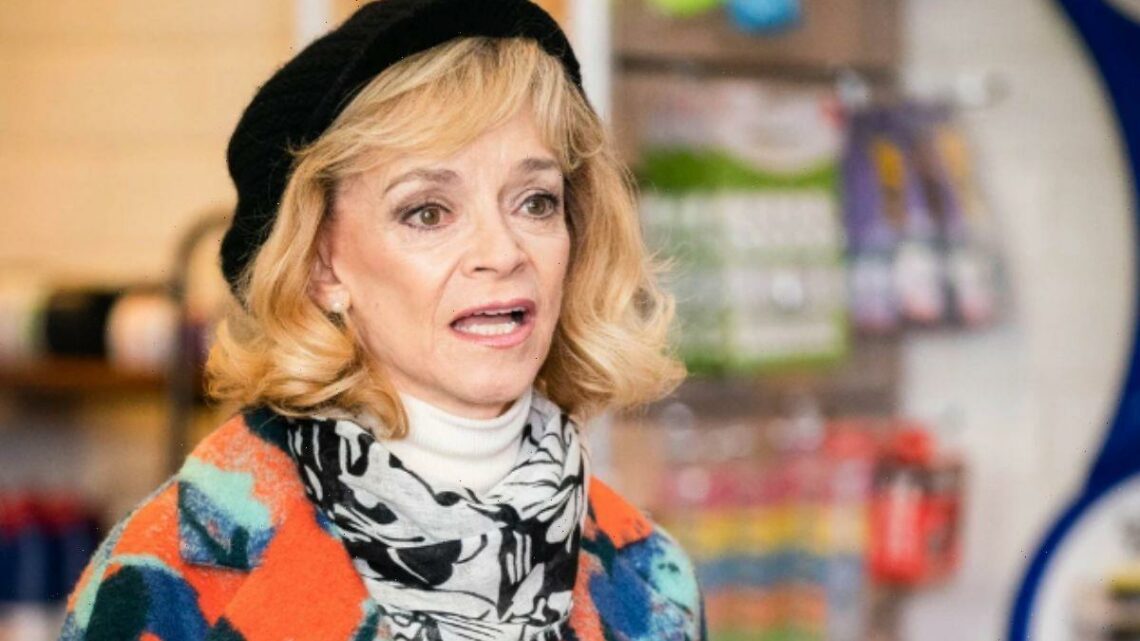 Talking in an exclusive interview with Express.co.uk, Sue Holderness recalled how filming her Eastenders acting role was sabotaged due to the pandemic. The former Only Fools and Horse legend had been due to romance Billy Mitchell (played by Perry Fenwick) but, due to social distancing restrictions, she had to make a tennis ball the object of her affection instead.

While it may have looked like Sue was amorously chatting up an Eastenders hunk, the reality behind the scenes were very different.

“My character was supposed to be flirting with Billy and we were supposed to be very close together, but we had to be two metres apart!” she groaned.

“There was this stick with a tennis ball on it. We were sitting on either side of it and I had to flirt with the ball!” she joked.

She admitted that she “missed the camaraderie” of laughing and joking with other members of the team, whom she had “got on terribly well with”.

However, the strict rules surrounding the coronavirus pandemic meant that filming at a distance was the only way that the show could go on.

The social scene was severely restricted too, in spite of some of her close friends being on the set at the same time, including Natalie Cassidy (who plays Sonia Fowler).

“They coped magnificently well under the circumstances,” Sue recalled in admiration, adding that they were already “used to” the tennis ball technique by the time she arrived.

Sue’s short but memorable Eastenders stint saw her play the character Estelle, who arrived in Albert Square as the agent of Billy’s daughter Janet, played by child actor Grace.

She seemed to hit it off instantly with Billy and thankfully, viewers would never have been able to tell that it was a tennis ball she was talking to.

It was Sue’s first time ever acting on a soap in spite of 52 years in the business, and she “loved” the experience.

She also admits that she has fond memories of her time on Only Fools And Horses, recalling that playing Marlene had “radically changed” her life.

“Now I’m top of the bill because of Marlene!” she exclaimed proudly, adding: “People love the character.”

Meanwhile, as the nation debates the controversial revelations made by Harry in his new autobiography, Spare, Sue insisted she won’t be one of those reading.

Instead, she’s revealed she’ll be turning to a newspaper like Express.co.uk to hear “the juicy bits”.

“I haven’t got enough life left to waste on Harry’s book, I’m afraid!” she exclaimed.

Sue continued: “I’ve been lucky enough to meet every single member of the Royal Family. There’s nothing remotely racist about [them]!”

Harry has since clarified that he doesn’t believe his family has been racist, but that he thinks they are influenced by “unconscious bias” after questions were raised about the colour of Archie’s skin, the son he shares with Meghan Markle.

Meanwhile, Sue says she won’t be tuning into the couple’s Netflix series either, branding the episodes “jolly tedious”.

“Six hours of doom and gloom!” she groaned, acknowledging that she feels Harry is “probably quite unhappy”.

The “profound royalist”, whose loyalties lie with King Charles, also added: “[The Netflix show] would be six hours of my life pretty much wasted.”