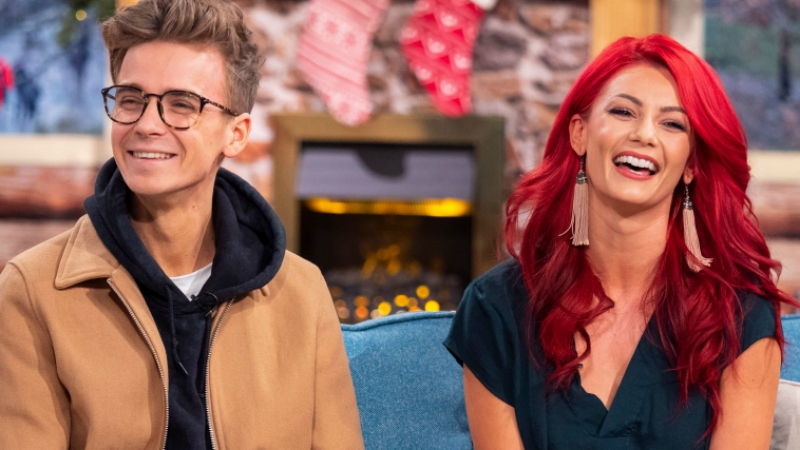 Leaving audiences guessing over their are-they-aren’t-they status, it appears Strictly Come Dancing‘s Joe Sugg and Dianne Buswell have made their ballroom romance official!

The dancing duo have kept tongues wagging throughout their hugely popular dancefloor stint, with plenty of the BBC audience wondering if the pair could be more than just co-stars…

Dress run done and I couldn’t be happier with how our Joseph did ? I still can’t believe he has done 2 dances in one week go on joe ! Now for the live show ? let’s enjoy every second and moment and know how proud I am of you ?? see you all tonight on the telly box will give ya a wave ?

However, it appears that the end of the 2018 ballroom competition also spelt the end to romantic speculation – as Joe has appeared to confirm his relationship with the Strictly pro.

Taking to Instagram, Joe, who missed out of the Strictly top spot to reigning winner Stacey Dooley and her partner Kevin Clifton, shared a sweet snap thanking Dianne for her hard work over the series.

With the duo gazing into each others eyes, Joe captioned the snap with a very telling message…

‘I may not have won the glitter ball, but I’ve won something a million times more special,’ he posted.

I may not have won the glitter ball, but I’ve won something a million times more special.

As expected, Joe’s apparent confirmation of his relationship with Dianne has sparked a huge reaction from Strictly viewers.

Agreeing, a third added: ‘Please tell me this means you two are together! ❤‘

@joe_sugg means business with his top knot hair do ? prepping in the dressing room for tonight’s show and wanted to take some time to thank you all for the love and support it really means so much and we couldn’t have got to week 10 with out ya’ll ??? cya all tonight when we take on the street dance and …. Lindy hopathon ? Ing for week 11 ? @bbcstrictly

Dianne has since shared her own sweet message to Joe, taking to Twitter to reveal she is missing training him up…

‘It’s Monday and it feels weird that I’m not waking up to go teach @Joe_Sugg a new dance !!! Now there was two dances we didn’t get to do … the rumba and tango !

‘Hands up if joe should learn these ?  my hands are up. song suggestions ????,’ Dianne shared.

Strictly winners Stacey and Kevin also appeared to confirm Joe and Dianne’s romance today during a visit to the This Morning studios.

After being quizzed on the snap by host Ruth Langsford, Stacey responded: ‘Oh Joe, Joe’s my boy.’

Kevin then agreed, saying: ‘They’re both so lovely. Yeah, that’s lovely for them.’

Yup, we’re going to take that as an official confirmation!