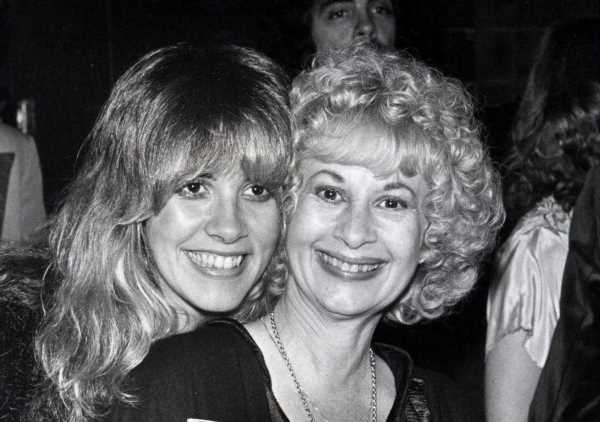 Stevie Nicks and her mother were close in life. The iconic Fleetwood Mac musician credits her mother for shaping her into an independent woman. After her mother’s death, Nicks believes they got even closer. She explained that she relies on her mother from beyond the grave.

In 2012, Nicks’ mother, Barbara, died from complications of pneumonia. Nicks said they had a close relationship and that her mom pushed her to be the woman she is today.

“My mother was always totally supportive of me and whatever I wanted to do. Even as a young girl,” Nicks shared with Oprah’s Master Class. “But she was also very strict with me, and she was hard on me in a lot of ways because she wanted me to be independent.”

Nicks expanded on this in an interview with The Guardian.

“She said to me: you will never stand in a room full of men and feel like you can’t keep up with them. And you will never depend upon a man to support you. She drummed that into me, and I’m so glad she did.”

Soon after her mother’s death, Nicks began to believe that the dead can communicate with the living.

“Some people are really afraid of dying, but I’m not,” she told The Guardian. “I’ve always believed in spiritual forces. I absolutely know that my mom is around all the time.”

Nicks explained that she’d contracted a head infection, so her doctor suggested she drink a lot of electrolytes. According to Nicks, she began “pounding” Gatorade, which quickly gave her acid reflux.

“I felt something almost tap my shoulder and this voice go: ‘It’s that Gatorade you’re drinking,’” she said. She added, “Now, that’s not some romantic, gothic story of your mother coming back to you. It’s your real mother, walking into your kitchen and saying ‘Don’t drink any more of that s—.’”

She added that she frequently feels her mother’s presence and often asks for help finding misplaced items.

“It’s so real and creepy, and I always just go ‘Thank you, Barbara,’” she told the LA Times. “I sometimes feel I have more of a relationship with my mom since she’s been dead than I did before she died.”

Does Stevie Nicks have any children?

Nicks explained that she made the conscious decision not to have children along with Fleetwood Mac bandmate Christine McVie.

“If Christine was in this room with me right now, she’d tell you that we both made the decision not to have kids and instead follow our musical muse around the world,” she said. “It’s not my job, it’s who I am.”

While Nicks does not have any children of her own, she has many she greatly cares about. According to her, she has 11 or 12 goddaughters who she chose; at their births, she asked their parents if she could be their godmother. She said she spoils them with gifts and appreciates the way that they keep her young.

Nicks also has a stepson from a brief marriage with the widower of her good friend. They married to raise her friend’s son but quickly realized it wouldn’t work out. Still, Nicks maintains a relationship with her stepson, Matthew, and his daughter, Robin.

“Last Christmas, she was at my house and she comes into the kitchen, grabs my hand and goes: ‘Come with me, Grandma Stevie,’ and I’m going: ‘Did this child just call me Grandma Stevie?’ She did. And on that day I wrote in my journal and it said: ‘I promise you, Robin, that I will be Grandma Stevie until death do us part.’”