Home » Celebrities » Stephanie Davis sets up Instagram account for son Caben, four, to help him earn cash for the future 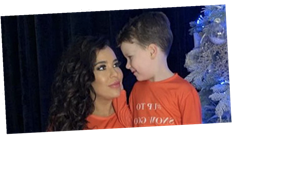 Stephanie Davis sets up Instagram account for son Caben, four, to help him earn cash for the future

Stephanie Davis has set up an Instagram account for her four year old son Caben-Albi to help him earn cash for the future.

The former Hollyoaks actress announced the news on her own Instagram page as she shared a screenshot of his profile, @cabenalbidavis.

The 27 year old says she questioned whether or not to make the account, but realised it will “help him in the future”.

Urging her followers to follow her son, she wrote: “Caben now has an Instagram! Go follow him!!! I’ll be posting all things Caben and all the baby memories I never got the chance to post of him back then.”

She added with a crying with laughter emoji: “He’s looking forward to doing some stories. I wasn’t to sure about creating this for him, but if it means it will help him in the future, what mum wouldn't?!

“Everything will probably be about followers and everything shallow but don’t want him to fume at me when’s older haha so making one just in case”.

The little one already has over 4,000 followers, while his Instagram bio reads: “Caben-Albi Age 4 Welcome to my world Account ran by my mummy”.

Posts so far include snaps of Steph and Caben on a trip to Sweden when he was younger and a more recent pictures of the pair in the park.

Caben-Albi’s father is Stephanie’s former boyfriend Jeremy McConnell. The pair met during the 2016 series of Celebrity Big Brother and went on to have an incredibly tumultuous relationship.

Stephanie gave birth to Caben-Albi in January 2017 and after their relationship ended Jeremy was found guilty of assaulting her and sentenced to 20 weeks in prison in August 2017.

The sentence was suspended for 12 months and he was ordered to carry out 200 hours of community service, but months later he was jailed for failing to turn up to eight community service appointments so he could travel to Turkey for a hair and beard transplant.

The 31 year old was released from prison after 34 days.

The former Beauty School Cop Outs star then became a dad again in November 2019 when his girlfriend Katie McCreath welcomed their daughter Storm, now one.

The couple are still together and Jeremy regularly posts snaps of them on holiday and out for dinner.

Stephanie went on to date her former Hollyoaks co-star Owen Warner, who plays Romeo Quinn in the Channel 4 soap.

The pair dated for nine months but split in September 2019, with Stephanie later confirming she was leaving Hollyoaks once again later that year.