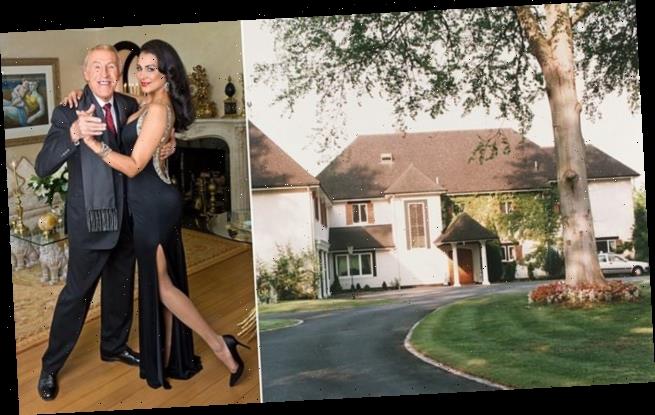 Didn’t she do well! Sir Bruce Forsyth’s widow Wilnelia, 62, moves on with £5 million mansion close to the exclusive Wentworth Estate in Surrey

And now the former Miss World winner has secured a huge ‘Brucie bonus’.

I can disclose that Lady Forsyth quietly sold the couple’s beloved marital home before the property market went into lockdown.

Cleverly, she is said to have secured a sale price around £5.5 million — £1.5 million more than it was officially valued at in 2018, the year after her much-loved husband died aged 89.

Wilnelia confirms the sale, telling me: ‘It was hard to leave a place with so many happy memories for me and my family, but I think they all understand.’

She adds, movingly: ‘It was sometimes sad to be in such a home without Bruce.’

One of her friends tells me: ‘It was a stroke of luck that Wilnelia managed to sell it before the crisis hit, because the market’s plunged since then.

‘The price was impressive because the house was actually not that big, and very dated. It will almost certainly be demolished by its new owners and a mega-mansion built in its place. That’s what happens round here.

‘The house was too big for Wilnelia. She also wanted a fresh start. Bruce loomed large wherever she turned.’ Lady Forsyth, 62, has moved to a smaller house nearby on the exclusive Wentworth Estate in Surrey, surrounded by the golf course that was like a second home to Sir Bruce. 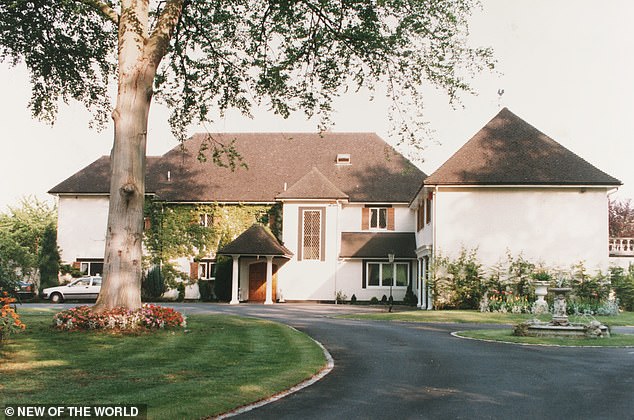 After he died, probate documents revealed that he had left nearly all of his fortune to Wilnelia — but not a penny to his six children. The entertainer left £100,000 in a trust for his nine grandchildren, who will split the cash when they turn 21.

Lady Forsyth, who has a son with Sir Bruce, explained that her husband had ‘looked after his children in his lifetime’.

She added of his five daughters from two previous marriages: ‘I’m not only the girls’ stepmother but their friend, too. I will always be there for them.’

The Forsyths’ 34-year-marriage was one of the strongest in showbusiness, despite their age gap.

They met in 1980 when both were judging the Miss World final. Wilnelia, who is from Puerto Rico, was 23 and a successful model, with no idea of 52-year-old Sir Bruce’s British national treasure status from hosting shows such as The Generation Game.

A year after his death, she revealed that nothing had been moved at their home since he left; the books, ornaments and family photographs were left exactly where they were.

Most touchingly of all, she even admitted that she still spoke to her late husband: ‘I try to be strong for the family, but if I told you it’s been easy I’d be lying.

‘I miss Bruce every single day.’ 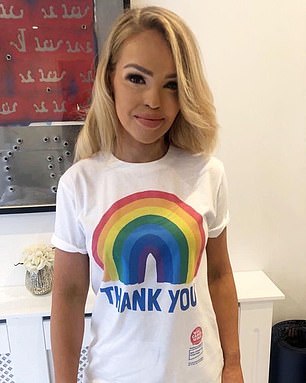 If something good is to come out of this crisis, it should be that damehoods for famous actresses and gongs for ageing rock stars are consigned to the past. That’s according to Katie Piper, pictured above

If something good is to come out of this crisis, it should be that damehoods for famous actresses and gongs for ageing rock stars are consigned to the past.

That’s according to Strictly star Katie Piper, the model who became an inspirational figure after surviving an acid attack by an ex-boyfriend.

‘It’s wonderful that the people who keep this country going — key workers such as hospital porters, cleaners, delivery drivers and shelf-stackers, as well as the medics — are finally being appreciated,’ the TV presenter says.

‘I feel there’s been a sea-change in the kind of people we admire and appreciate. I hope this will be reflected in the honours lists.’

Shoe designer puts her foot in it at home

They say a girl can never have too many shoes, but heiress Charlotte Dellal is pushing the limit.

The granddaughter of late billionaire property tycoon ‘Black Jack’ Dellal admits that her obsession is causing tensions in her marriage.

The footwear designer, whose creations are worn by everyone from the Duchess of Sussex to pop superstar Taylor Swift, confesses: ‘I didn’t think I would ever say this out loud, but I have too many shoes.’

Married to private equity investor Maxim Crewe, she reveals: ‘A few years ago, when I was leaving the house I told my husband I wasn’t ready because I couldn’t find any shoes and he just walked out.’

Michael Ball has big plans for Captain Tom Moore after topping the pop charts with the 100-year-old charity champion.

‘Tom and I are announcing our arena tour when lockdown ends,’ jokes the West End star.

‘We might do Wembley. I think we should do stadiums, and then work up from there.’

While lockdown is driving many of us up the wall, eccentric Helena Bonham Carter finds it liberating — because she no longer needs to worry about rivals winning better roles than her.

‘It’s a massive consolation, professionally, because everybody is unemployed as I am,’ admits the Harry Potter star.

‘Actors are always looking over their shoulders going, “so-and-so has got a job”, and you can feel inadequate very quickly.’

Hollywood actor Stanley Tucci has clearly been won over by Britain’s cuisine since moving here to live with his wife, literary agent Felicity Blunt.

‘In America, there are pockets of real food in mostly upscale urban areas, but the agricultural practices and the glut of fast-food joints, particularly in rural and poorer areas, make it a sad culinary story,’ says Tucci, whose blockbuster films include The Hunger Games.

The former Oscar nominee lives in the capital with Felicity, sister of Mary Poppins star Emily Blunt, and their two children. He gushes: ‘London is now a culinary Mecca — what an extraordinary gustatory tapestry.’

A keen amateur chef, Tucci adds: ‘I’d like to study the basics of French cooking, just for myself. I’d like to open a small restaurant — with someone else’s money.’ 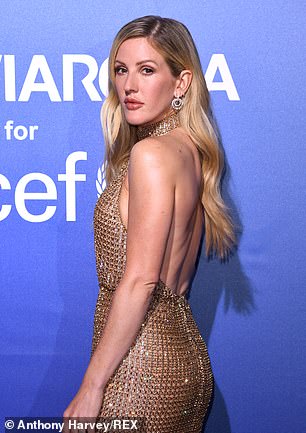 Ellie’s in no rush to pop back home

Will London ever regain its appeal to the beau monde?

Pop star Ellie Goulding is among those to have fled the capital during the coronavirus crisis — and it doesn’t sound like she plans to return in a hurry.

She says: ‘I have a place in Paddington and I feel like it’s got a hard energy; it’s a lot of people.

‘It’s very busy and is quite polluted, and I feel really conscious of pollution.’

Ellie adds: ‘I grew up in the countryside, in the middle of nowhere in Herefordshire, so I feel like it’s in my blood to be breathing slightly cleaner air. If I had my choice, I would live here permanently.’

She’s Prince Harry’s favourite classical singer, but ‘scrummy soprano’ Laura Wright is antagonising her own Harry with her endless practising.

‘Singing is getting me through isolation,’ says the mezzo-soprano — who released a new single, Can You Hear Me?, with The Choir of Royal Holloway for Mental Health Awareness Week.

She tells me: ‘I really miss performing, and I am singing more at home now than I have ever done, but Harry is nearly full of it by now. He’s bored by me singing Nessun Dorma because it’s so loud.’

Sleeping with fans is rightly frowned upon in the #MeToo era, but tennis ‘bad boy’ Nick Kyrgios is happy to admit he takes advantage.

The former Wimbledon quarter-finalist claims he beds admirers on a regular basis when he doesn’t have a girlfriend.

‘Yes, in all seriousness, if I’m not seeing someone it’s a weekly thing,’ he says.

After losing a Laver Cup match to Roger Federer last year, Kyrgios memorably walked to his chair and told team mates: ‘I lost concentration, I saw a really hot chick in the crowd.’ 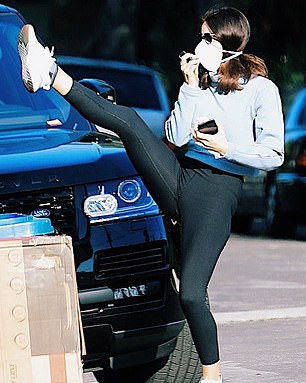 Katharine, 36, is also adept at maintaining social distancing when she chooses. And to prove it she shared this snap of her kicking one of her slender legs high in the air

Actress Katharine McPhee has proved masterly at cosying up to the Duke and Duchess of Sussex.

Indeed, she boasted this week that Prince Harry, 35, and her music executive husband David Foster, 70, enjoyed a ‘father and son’ relationship.

But Katharine, 36, is also adept at maintaining social distancing when she chooses.

And to prove it she shared this snap of her kicking one of her slender legs high in the air.

She joked: ‘How I’m keeping people 6ft away.’

She and Meghan, who attended the same school in California, were reunited after Katharine starred on the West End stage in the hit musical, Waitress.