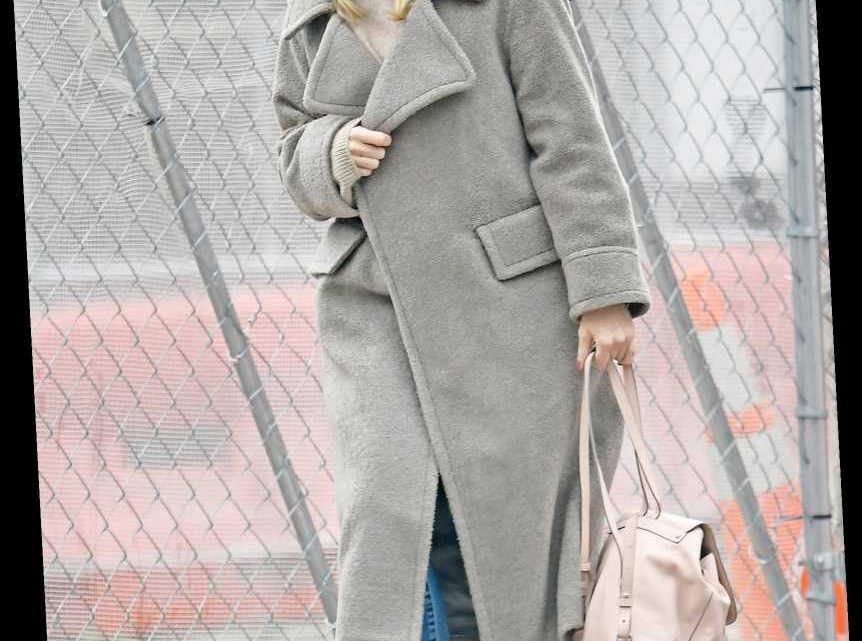 Sienna Miller shows off her signature style during a stroll through New York City on Friday.

Sterling K. Brown gets dramatic on Friday while filming scenes for This Is Us in Highland Park, California.

Jude Law has some fun at the opening ceremony of Tokyo Comic-Con 2019 at Makuhari Messe in Chiba, Japan, on Friday.

Birds of a Feather

Maluma — with a bird and some onlookers — attends the opening race of season six of the ABB FIA Formula E Championship on Friday in Saudi Arabia.

Jhene Aiko shakes things up at the BACARDI Brings Rum Room to New York City at The DL on Thursday.

Drive In, Drive Out

Fresh as a Daisy

John Legend sports a blue suit and a black turtleneck as he heads through the streets of N.Y.C. on Thursday.

Leonardo DiCaprio and Brad Pitt arrive at the Sony Pictures Once Upon a Time … in Hollywood special tastemaker film screening on Thursday in L.A.

Hilaria and Alec Baldwin join Tina Fey at the American Museum of Natural History’s 2019 gala on Thursday in N.Y.C.

Rocky costars Dolph Lundgren and Sylvester Stallone pose together at the red carpet premiere of Balboa Productions and DAZN’s One Night: Joshua vs. Ruiz documentary on Thursday in Beverly Hills.

Honoree Danai Gurira speaks at the podium during the 2nd annual CARE Impact Awards dinner at the Mandarin Oriental on Thursday in N.Y.C.

Clive Owen smiles at the afterparty of Sony Picture Classics and The Cinema Society’s special screening of The Song of Names at Omar’s La Boite on Thursday in N.Y.C.

Dollface costars Kat Dennings and Brenda Song pose together at the Paley Honors: A Special Tribute to Television’s Comedy Legends at the Beverly Wilshire Four Seasons Hotel on Thursday in Beverly Hills.

FKA Twigs is all smiles during a visit to SiriusXM Studios on Thursday in N.Y.C.

On Thursday in Los Angeles, Sofia Vergara steps out in ripped jeans, a long-sleeved T-shirt featuring the word “Love” and an oversized Chanel bag.

Nina Agdal poses at FRAME’s Thanksgiving Feast on Wednesday at Morandi in N.Y.C., where the brand announced it will donate 1,000 meals to those in need through FeedingNYC this Thanksgiving.

Host Ciara attends the 2019 American Music Awards press day and red carpet roll-out ahead of Sunday’s show at the Microsoft Theater in L.A. on Thursday.

Kacey Musgraves continues her very stylish press tour in N.Y.C. on Thursday in a stunning green coat and floral dress.

Naomi Watts arrives for the 71st Bambi Awards at Festspielhaus Baden-Baden in Germany on Thursday.

Harry Styles flies high (and sings at the same time!) while filming a Christmas special edition of James Corden’s Carpool Karaoke in L.A. on Wednesday.

Her Smell star Elisabeth Moss chats onstage at a screening of the new Alex Ross Perry film on Wednesday at The Museum of Modern Art in N.Y.C.

Jumanji: The Next Level costars Dwayne “The Rock” Johnson, Karen Gillan and Jack Black raise a glass of Teremana tequila alongside a stuffed baboon at the film’s photo call on Wednesday in Cabo San Lucas, Mexico.

Lenny Kravitz looks effortlessly cool as he flashes a peace sign while out on Wednesday in N.Y.C.

Zendaya looks straight out of a Greek myth while celebrating GARAGE Magazine’s Issue 17 on Tuesday at Chateau Marmont in Hollywood.

Katy Keene costars Zane Holtz, Jonny Beauchamp, Lucy Hale, Ashleigh Murray and Julia Chan strike a pose to show off an ad featuring Holtz on the side of a bus on Wednesday in New York City.

Ed’s Night at the Theatre

Chadwick Boseman stops by Build Series to chat about his movie 21 Bridges on Wednesday at Build Studios in N.Y.C.

Hailey Bieber poses in Berlin, Germany, at the Calvin Klein “A Night of Music, Discovery and Celebration” event on Wednesday.

Camila Cabello belts out a tune in Hollywood on Wednesday while onstage during A Celebration for Artists, hosted by Spotify.

Dinner with a Cause

Nyle DiMarco poses with a Nowaday vintage car at the TAFT: SoHo store opening in N.Y.C. on Wednesday.

Fight for the Right

UNICEF Goodwill Ambassador David Beckham addresses a meeting during the 30th anniversary of the adoption of the Convention on the Rights of the Child, at United Nations headquarters in N.Y.C. on Tuesday.

Katharine McPhee greets the press ahead of her return to Broadway’s Waitress at Sardi’s restaurant in New York City on Tuesday.

Venus Williams dances with the Laker Girls during halftime at the Los Angeles Lakers vs. Oklahoma City Thunder basketball game on Tuesday at the Staples Center in L.A.

Sexiest Man Alive John Legend wows the crowd at Union Station on Tuesday in L.A. as part of SiriusXM’s Dial-Up the Moment campaign.

Matthew McConaughey speaks at the With Thanks launch event on the Sydney Royal Botanic Gardens’ Bennelong Lawn on Wednesday in Sydney, Australia.

Sienna Miller and Chadwick Boseman are all smiles at the world premiere of 21 Bridges on Tuesday in N.Y.C.

David Harbour hits the carpet at the A Bright Room Called Day opening night celebration on Tuesday at The Public Theater in N.Y.C.

Scarlett Curtis and Meg Ryan pose together at the annual Make Equality Reality Gala hosted by Equality Now on Tuesday at Capitale in N.Y.C.

Jon Hamm steps out in a denim jacket on Tuesday in Los Angeles.

Hilarie Burton shows off her gingerbread house during her visit to People Now on Tuesday at the PeopleTV Studios in N.Y.C.

Brie Larson makes a guest appearance on The Ellen DeGeneres Show on Wednesday in Burbank, California, to discuss Avengers: Endgame and her upcoming film Just Mercy.

Linda Cardellini smiles onstage during a SAG-AFTRA Foundation Conversations and Screening of her Netflix series Dead to Me on Tuesday in L.A.

To the Art of It

Debi Mazar speaks at the 25th Annual ARTWALK NY benefiting Coalition for the Homeless, presented by Max Mara, at Spring Studios in N.Y.C. on Tuesday.

Idina Menzel and Kristen Bell are honored with stars on the Hollywood Walk of Fame on Tuesday, ahead of their Frozen 2 release this weekend.

Ashley Williams gets comfy on Tuesday during her visit to People Now at the PeopleTV Studios in N.Y.C.

Georgia May Jagger attends Citymeals On Wheels’ 33rd Annual Power Lunch for Women at The Plaza Hotel in N.Y.C. on Tuesday.

On Tuesday, Iggy Azalea gets chatty on Elvis Duran and the Morning Show at Z100 Studios in N.Y.C.