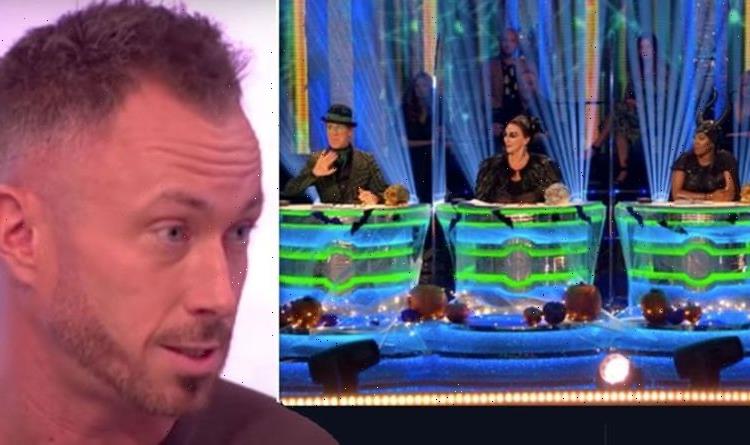 Former Strictly Come Dancing professional James Jordan has hit out at the four judges; Shirley Ballas, Craig Revel Horwood, Motsi Mabuse and Anton du Beke as he accused them of unfairly marking some of the contestants tonight. After a viewer pointed out that Rhys Stephenson scored the same 33 points as John Whaite, the 43-year-old said: “Such a shame the judges can’t mark fairly and then let the public only possible reason is they are trying to keep people in the show.

“Higher up the leaderboard less chance you have of going – FACT.”

Midway through the show, the dancer said he was yet to be impressed by any of the routines apart from John and Johannes’ Quickstep routine.

After this, he went on to praise Rose Ayling-Ellis and Giovanni Pernice, who scored the first 40 of the series.

He had a different view on Tilly Ramsay and Nikita Kuzmin however as he claimed there Cha Cha had “too much fluffing about”.

He said the dancing duo “got halfway through the routine till I knew what they were doing”.

“She didn’t finish and turn out her back foot at all in cha cha basics,” he added.

“I have no idea why the judges haven’t mentioned lack of steps.”

Despite James’ opinion, the pair were awarded 35 out of 40 points for their efforts.

The Dancing on Ice winner went on to say that Tom Fletcher “showed no masculinity”.

He tweeted: “He was b****y brilliant last week but a little disappointing tonight.

“Great track and routine plus the tango is one of the easiest dances to make look good on Strictly.

“BUT he was quite weak in posture and power. He had me strength AT ALL and showed no masculinity.”

James also predicted that the final will include; Rose, John and AJ Odudu.

Strictly viewers had their say on tonight’s episode on Twitter.

Kevws said of Rose being awarded full marks: “The most deserved 40 I have ever seen. Congratulations Rose and Giovanni #Strictly.”

Stephen Patterson commented: “What a great quickstep from John and Johannes. Is there anything they cannot do?! #Strictly.”

Ryan Glendenning penned: “#Strictly. Katya has the best choreography as well as always I loved the whole production of the dance it was brilliant. A good frame but things to work on.

“However he is improving well done Adam. A good performance.”