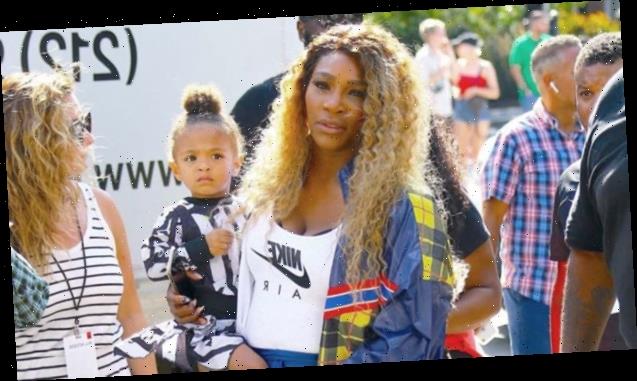 Serena Williams’ adorable three-year-old daughter, Olympia, showed off her impressive tennis backhand in a brand new pic on Instagram! The youngster modeled her form after ‘the queen’ of the court and looked just like her mama!

Look out, US Open! There’s a new competitor ready to hit the court! Just after her mama, Serena Williams, won her quarter final at the 2020 US Open, little Olympia Ohanian got her own tennis racket and started practicing her backhand with her BFF, Qai Qai, by her side. In the snap, shared to Instagram on September 9, Olympia looked like the spitting image of her 23-time Grand Slam-winning mom, 38.

The three-year-old, born Alexis Olympia Ohanian Jr., took a wide-leg stance and kept her eye on the ball, while her favorite doll — an animated version of Qai Qai — made the exact same motion. It truly felt like seeing a pint-sized version of Serena on the court. And Olympia did it all while rocking a cute, all-black outfit with white sneakers and wearing her mask, per safety requirements at the USTA Billie Jean King National Tennis Center in Flushing Meadows just out side of Queens.

“The queen makes it look easy,” the caption to the snap read, tagging Serena’s own IG handle. Based on the photo, it looks like Olympia is ready to follow in her mama’s footsteps, which might have been Serena’s plan all along! After winning her round of 16 match against Maria Sakkari of Greece on September 7, Serena confessed that she cannot wait for Olympia to pick up a racket.

“She’s a fan of tennis, she loves watching, you know,” Serena shared in her post-match interview on the court of Arthur Ashe Stadium. “She comes out and watches me practice, at least on this court. She loves when I practice on this court because she can sit and watch.” Serena then admitted that she’s been thinking about getting Olympia on the court herself.

“I’m like, ‘I gotta put my career aside and get a racket in her hand.’ Seriously, that’s what I told my husband [Alexis Ohanian] yesterday. I’m like, ‘We gotta get a racket in her hand.’” Even if she is still learning the serves, aces, and forehands of the game, Olympia is already an expert cheerleader for her mama! The little one was seen in the stands in an adorable moment following Serena’s third round match against 2017 US Open champion Sloane Stephens. Olympia looked super cute, waving at her incredible, inspiring mama on the court.

Unfortunately, Olympia probably won’t be able to watch Serena’s semi-final match tonight, September 10, at 8:15 pm. The youngster will likely be fast asleep while Serena takes on fellow Grand Slam winner Victoria Azarenka. The two moms — Vika is the mother to four-year-old son Leo — faced off at the US Open finals in 2012 and 2013, both of which went to Serena. Even though she won’t be able to cheer on her mama, we know that Olympia will be with Serena in spirit as she continues her quest for her record-equaling 24th Grand Slam!