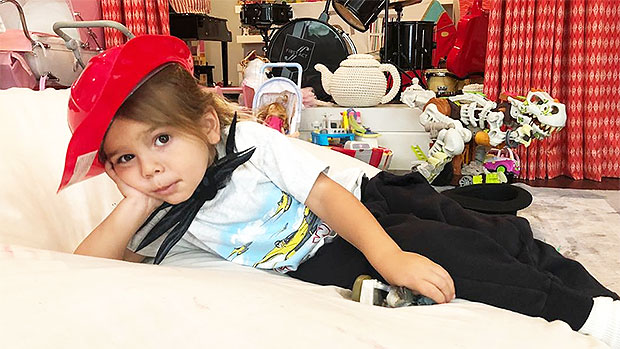 Leave the little guy alone! Reign looks cute as can be with his long hair, but some fans want Scott Disick and Kourtney Kardashian’s son to chop it all off. See for yourself!

Kourtney Kardashian, 39, and Scott Disick, 35, must be used to the criticism by now, but we bet it’s beyond annoying when fans come after their kids. The pair share three adorable little ones — Mason, 8, Penelope, 6, and Reign, 3 — and their youngest has been drawing attention lately for his long locks. Even though Reign’s hair looks super sweet grown out, whether it’s down around his shoulders or pulled back into a ponytail, that still hasn’t stopped Scott’s Instagram followers from slamming the latest shot of his son. “Dream boy,” the father of three captioned his Dec. 4 pic, which featured Reign sitting on a white couch eating a jelly donut.

But instead of honing in on how risky it is to munch on a messy dessert like that on a pristine couch — wearing a white long sleeve, no less — many of Scott’s social media followers were focused on Reign’s hair. He had some wisps around his face, and the rest in a messy bun. Aw! “I thought that was Penelope,” one user wrote, while another added, “Looks more like a dream girl.” Others got even more blunt and to the point, writing, things like “Cut that hair already,” and, “Whoops, looks more like your daughter.”

This isn’t the only time that Scott has been dad-shamed for his son’s look! When Kourtney posted a picture with Reign by the pool, rocking long wet hair and orange swim trunks, fans had the same negative response.

If people don’t have anything nice to say, why say anything at all? Reign is adorable, and if this is how he likes to wear his hair, then what’s the big issue?