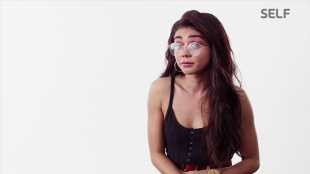 For the first time, Sarah Hyland is opening up about the scary health issues that caused her major weight loss earlier this year. Plus, she admits she contemplated suicide as she went through it all. Watch here.

Sarah Hyland, 28, dropped to less than 80 lbs. earlier this year, sparking major concern amongst fans about what was wrong with her. While she admitted at the time that she was struggling with health issues, it wasn’t until now that she detailed exactly what went wrong. The issues stemmed from a kidney transplant Sarah had seven years ago…which she started rejecting in 2016. Sarah broke down in tears while explaining that the original transplant failed in a video for SELF magazine. “When a family member [dad] gives you a second chance at life and if fails, it almost feels like it’s your fault,” she explained, through tears. “It’s not, but it does.”

She went onto explain that tons of tests were done to find out what was wrong, but there was nothing doctors could do. That’s when she had to start the grueling process of dialysis, which required her to be “hooked up to a machine three times a week, for four hours per session.” In May 2017, she had a “Nephrectomy,” which involved taking the failed kidney out. “At that time, I was very depressed,” she admitted. “For a long time, I was contemplating suicide. I had gone through 26 years of always being a burden, of always having to be looked after having to be cared for. I’ve always had health issues, and it’s a really helpless feeling. Things like this can be really hard on a person.”

In July 2017, Sarah found out her brother was a match to donate a kidney, and although the news was obviously exciting, it also terrified her. “When a second family member — someone who you’re supposed to look after, like a little brother — wants to give you a third chance at life, it’s scary,” she said. “You don’t want to fail them. I felt a lot of pressure to make sure that it was good.”

That September was a whirlwind for the actress. She went to an Emmys party and on her first date with Wells Adams on Sept. 16, attended the Emmys on Sept. 17, filmed Modern Family on Sept. 18, and was up at 4:00 a.m. on Sept. 19 for the surgery. The recovery process was not easy, but now, she’s back on track. “I’m healed,” she confirmed. “My numbers are good. I’m stable.”

However, the kidney surgery was only one of her many health issues of the last few years. She was also diagnosed with Endometriosis, and had to have a surgery to remove a hernia that went undetected for almost a year. “I would say [I’ve had] at least 16 surgeries in 27 years,” Sarah revealed. Watch her full story above.