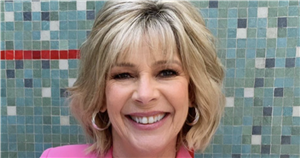 This Morning host Ruth Langsford was among the staff and guests who were reportedly forced to hide in a room after a mob of anti-vaccination protestors stormed the television studio she works at.

The 61 year old television personality was said to have just wrapped filming on the ITV daytime talk show, which is filmed at the BBC TV Centre in London when she was rushed to safety after violent scenes unravelled outside.

Luckily, Ruth's husband Eamonn Holmes had already left the building just before protestors gathered to voice their frustration over the introduction of vaccine passports and vaccinating children.

A source told The Sun: "Ruth Langford was still stuck inside, although Eamonn had managed to get out."

It was continued: "It was terrifying. No one knew if the protestors had weapons. The protestors arrived after This Morning had come off air.

In particular, it was noted by the source that the protester's leading source of contention was how the issue of anti-vaccination had been "handled on the show".

The source added: " ITV are going to have to carry out a major inquiry after security was breached."

Horrifying videos and pictures captured by onlookers show police officers getting caught in the middle of the rally as furious protestors attempted to make their way into the building.

Meanwhile, the scary protest was unravelling while Loose Women was on air, with panellist Charlene White taking to Twitter a few hours later to give further context into the situation.

"Huge thanks to Andy and the security team over at Television Centre. The protesters attempted to gain access to the building while we were live on air with @loosewomen – and we've only just left, because of safety. Andy and his team were just incredible," she wrote.

In another tweet, she added: " And also huge thanks to the swift response of London'sLondon's @metpoliceuk… not an easy situation for them to deal with either.

"Not sure what protestors were hoping to achieve, but all they would've found was me, Jane, Nadia and Penny on @loosewomen talking about the menopause."

Participants in the Official Voice campaign, which stormed the BBC television studio, have made their stance about vaccinations clear and have claimed that " the media is the problem".