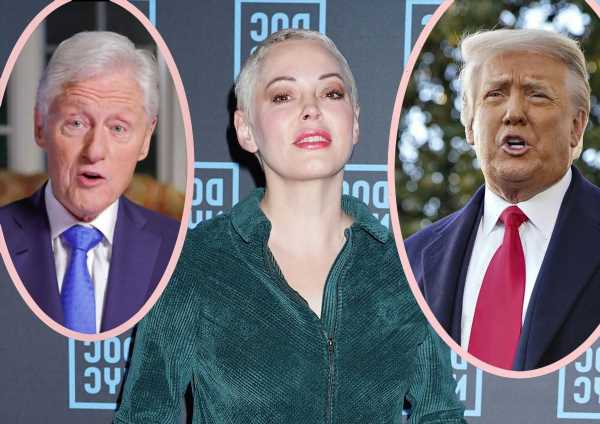 The Charmed alum is understandably full of self-righteous anger after no one listened to her for years when she was accusing Harvey Weinstein of sexual assault, but now it seems her trauma and anger have become unmoored from the convicted rapist — and directed at some pretty unexpected targets instead.

First she attacked the #MeToo movement, claiming it was all Hollywood phonies, then she took on the cause of Joe Biden accuser Tara Reade. We can only guess Rose identified with this woman no one would listen to, speaking out against a powerful man. But that was a rare case in which most media outlets felt uncomfortable giving a platform to a woman making accusations after just minimal vetting turned up ties to Vladimir Putin, Russia’s former KGB agent president who was known for spreading misinformation campaigns in favor of Donald Trump. It wasn’t a mirror of the myriad credible claims of sexual assault (not to mention admission on hot mic) of the former POTUS.

However, the lack of validity granted to Biden’s accuser seems to have turned Rose against the Democrats en masse. We mean… we guess??

We honestly don’t know how the Scream star came to her current position, but we can try to break down what she’s now saying.

Speaking on Fox News Monday night, the 47-year-old referred to her history being raised in a chapter of the Family International — formerly known as the Children of God cult. (Learn more about her story and other celebs linked to cults HERE!)

Using her background as a level of expertise in cult-like behavior, she made the bold proclamation:

“I am not here to make people feel bad about their political choices. But I am here to say that you might be in a cult, too, if you don’t know the signs. And I do believe Democrats, most especially, are in a deep cult that they really don’t know about and aren’t really aware of.”

At a time when the Republican Party has given itself over entirely to the will of a single man, someone everyone — including his GOP primary opponents — has tried to warn them was an apolitical grifter? When the Republicans are abandoning principles left and right in subservience to their fearless leader, someone who doesn’t respect US soldiers or family values? Someone who rather than supporting the ideology of limited government instead nakedly tried to accrue more power in an authoritarian race to dictatorship?

Sorry, but we are going to have to stick on this point for a moment…

When given the choice whether to believe our allies, our own intelligence and law enforcement agencies, the CDC, the medical community, election officials both Democrat and Republican, and their own damned eyes, the Republican base has consistently chosen the word of Trump. Their blind obedience to him has bordered on worship — to the point the most recent CPAC actually hosted a big, freakin’ golden idol of him for people to stop and pay fealty to.

Heck, a group of so-called patriots tried to literally overthrow our government, threatening to kill Senators and actually killing cops, just to undo the reality that he lost the election.

But it’s the Democrats especially that Rose is accusing of cult-like behavior?? She continued:

“I leave the Republicans alone more because I do respect people more that are like, this is what we are, this is what we’re about, this is what we’re against. But I find that the Democrats are really pretty much almost against all the same things, they’re against changing the world for the better, and they’re for keeping a system in place that is for so few people and benefits so few, but they masquerade as the helpers.”

OK, if we’re hearing her right, she’s saying she doesn’t necessarily like what the Republicans are for — because they’re blatantly not on the side of progress or helping the commonfolk — but the Democrats are SAYING they’re trying to help but are actually defending the status quo, too.

We can somewhat understand that. There certainly are a lot of Democrats who are obviously in the pocket of big business. Certainly last year when we learned some Senators had used their foreknowledge of the pandemic to profit off of others’ suffering, that wasn’t only on one side of the aisle. There’s plenty of things that some Dems do that don’t sit well with us. The party isn’t a monolith; some folks are really trying to help, though they disagree on how best to go about it. And some are trying to help themselves.

So yes, if she’s saying pure tribalism is just being willfully ignorant, we’d have to agree. But if you have to choose the lesser of two evils right now, you have to choose the side that is at least nominally trying to do good. That is not inherently worse, it’s inherently better. At least the people who are on the level are helping. The people who are on the level in the GOP are still trying to take away LGBT rights and women’s healthcare.

“My persecution and awakening from being a Democrat was so much about what I do and what I say now, and so much about realizing how hard-core of a cult it is.”

It was then that she brought up the link to Weinstein. This may indeed be at the heart of Rose’s hatred of the Democrats especially. She said:

“I’ve gotten people, you know, on the left yelling at me like, ‘You go up against Biden. You go up against the Clintons.’ I’m like, yes, but all of these people had — the Clintons have had a direct hand in helping one of my perpetrators, who was one of the most powerful Democratic donors there was and also their entrée into the Hollywood world.”

We have to say again, assuming everyone who worked with or met Weinstein knew about his secret criminal activity is just not fair. But as far as Bill Clinton goes… well, his own accusations of sexual assault should have been enough to take him down back in the day. And that probably was an early example of the sin of absolute tribalism you see today.

These days, we’re hearing so much about his ties to another monster, convicted pedophile and accused child s*x trafficker Jeffrey Epstein. The whole thing is shady as hell. He has that in common with Trump, and frankly anyone who finds one guilty by association but excuses the other out of hand is being ridiculous. Everyone in that man’s little black book, be they CEO, ex-President, or in line for the throne, should be accounting for their time and telling everything they know.

But that doesn’t make what Rose is saying right.

You may recall the actress-turned-filmmaker spoke up recently when accusations were coming out about her ex Marilyn Manson. She not only took the side of the accusers, she blamed the “Hollywood cult” for enabling him. But as we said at the time, the reason people doing awful things can flourish is not because there is some massive organization protecting them.

The truth is, there are a few folks who value money over all and are willing to take action to protect monsters. And there are even more who are looking out for themselves and too afraid to speak up. But there are a lot more who are dealing with their own crap and just don’t see what’s happening. All of us bear a bit of the blame for people like Weinstein getting away with horrible acts.

It’s easier for people who live elsewhere to believe this is a Hollywood problem or a DC problem. But the truth is there are little Weinsteins all over the place, at diners and lumber mills and hotels and universities across the country. Anywhere anyone can get a little bit of power, there’s someone using it to exploit people. And we’re all a little to blame. Those of us who don’t see it, those who turn a blind eye, and those who help cover it up.

That’s a harder pill to swallow than the existence of some unseen sinister cabal pulling the strings behind the scenes.

Innerestingly Rose predicted the strong pearl clutch to her words — shocking, right? — taking to Twitter to write about her interview:

Um… did she though?? She continued:

“If you lean deep into anything and refuse to hear anything else, and you’re serving a master that there’s no evidence they’re serving you, then maybe you’re in a cult… The fact that Fox News let someone like me that’s a humanist that’s trying to break s**t down and help deprogram people from cults they’re not aware they’re in, is pretty f**king extraordinary. All I want to do is spread the message we’re better than we have to be.”

We hate to break it to Rose, but this isn’t the media twisting her words. The viewers of Fox News also saw her saying the Democrats especially are in a cult. And because that network is an echo chamber, that’s exactly what they were supposed to hear. Why does she think the network’s YouTube page put up the interview with the title “Rose McGowan denounces the Democrat party in FOX News exclusive.” That’s why they had her on. Not to help viewers, but to stoke the fires of hatred between the two sides. That’s what this kind of message she’s sending does.