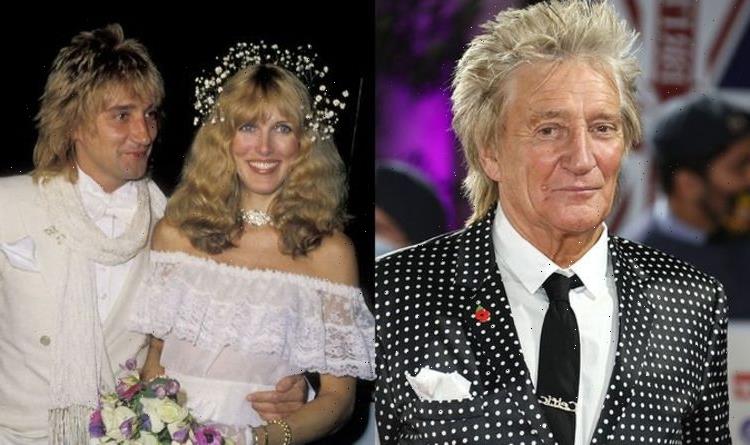 Rod Stewart discusses his marriage to Penny in 2018

Sir Rod Stewart, 76, has admitted his dad was right when he told him he should wait to get married, and he’s now passing that advice on to young couples and singles of today. The Maggie May singer confessed he thought he was ready to wed his first wife, but his dad’s advice was proven right and the pair split in 1984, just five years after saying “I do”.

Rod said: “When I told my dad I was getting married, he said, ‘You’re far too young’.

”He was right. I still had a lot of living, partying, drinking and sh**ging to do,” he added to People magazine.

He admitted he “really thought she was the one” when he married her aged 45. However, she left him in 1999 after nine years of marriage and he quickly met his third – and current wife – Penny Lancaster.

Of his breakup from Rachel, Rod said it was heartbreaking and joked: “No one breaks up with Rod.”

The Mail On Sunday added that he reportedly laid on the couch for four months clutching a hot water bottle after Rachel left him, and admitted that their 26-year age gap had impacted their relationship.

“My sister Mary told me she was too young for me as we were walking down the aisle. And she was right.”

However, it all worked out for the best as he gushed: “[Penny] has mended my heart in more ways than one.”

He added: “I always tell the girls in my band and my daughters, ‘A woman has so much living to do’. It’s your life! Forget men!”

Of his current relationship, he says intimacy has been the key to success, with the pair enjoying a “kiss and a cuddle and a hold”.

“Penny and I do that every morning,” he said.

“We hug each other — sometimes in bed, sometimes out of bed, all throughout the day. It’s a wonderful relationship. Lucky geezer, aren’t I?”

Rod and his 50-year-old wife share two sons, Alastair, 15, and Aiden, 10. He also has a 58-year-old daughter called Sarah with ex-girlfriend Susannah Boffey who was put up for adoption when the singer was a teen.

He shares son Sean 41, and daughter Kimberly, 42, with Alana, daughter Ruby, 34, with ex-girlfriend Kelly Emberg, and daughter Renee, 29, and Liam, 27, with his second wife Rachel.

Rod says he’s happiest when he sees his kids and wife smiling and admits he can’t think of anything better.

While he is set to take up residency once again in Las Vegas, he says that his success comes from being able to look after his children, as “there’s nothing like having kids”.

Penny has spoken about Rod’s youthfulness, as she discussed him being an older father recently while appearing on Loose Women.

When the panel asked if she was conscious of him being an older dad, Penny replied: “Not at all.

“My rockstar has got the fitness of a 35-year-old and he’s not retired. So I don’t consider him in that older category.”