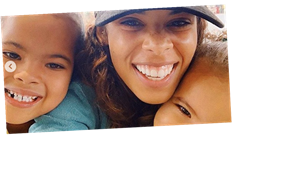 Rochelle and Marvin Humes announced that they are expecting their third child in a sweet post on Easter Sunday.

The pair are expecting their third child in October to join their daughters Alaia-Mai, six, and Valentina, three, and Rochelle appeared on This Morning on Monday morning to discuss the exciting news.

Speaking from her home, 31 year old Rochelle spoke to Eamonn Holmes and Ruth Langsford and revealed the sweet reactions her daughters had to finding out that they are going to welcome a baby sibling.

Rochelle revealed that the final egg in an Easter hunt had a little letter inside from the unborn baby.

She said of her daughters: “They are so so happy. We did a little Easter egg hunt for them yesterday and we told them at the end, the last egg they found had a little letter from the baby."

The Saturdays singer revealed her oldest daughter's adorable reaction was to cry “happy tears”, but little Valentina was slightly confused.

Rochelle said she asked Valentina: "Do you know what's in mummy's tummy?" and the little girl replied: "A chocolate egg?"

Rochelle also told Eamonn and Ruth that is feeling sick during the evening during her pregnancy, instead of in the morning.

And opening up on her and Marvin sharing their exciting baby news during the pandemic, Rochelle said: "So our hands, if they weren't full already, are about to be even fuller.

"But we are thrilled, it's nice news in this weird time at the minute.

"Weird to share it with our friends and family via FaceTime, but so lovely, so happy."

The couple announced on Sunday that they were expecting their third child, sharing the happy news on Instagram by revealing their baby will arrive in October.

It read: "We're eggspecting baby Humes October 2020," the mum-of-two then added in the caption: "There's a baby bunny in my oven…"

Rochelle and Marvin are already parents to two daughters Alaia-Mai and Valentina and have been married since 2012.

Pants or no pants? How your coronavirus home outfit impacts your mood
World News