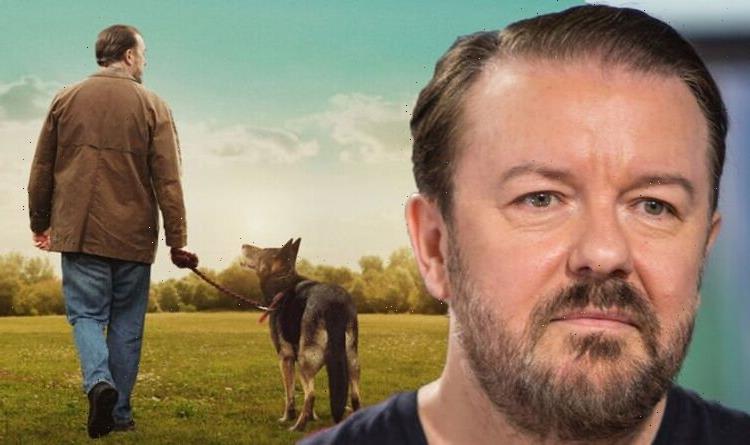 After Life: Ricky Gervais discusses his 'favourite ever moment'

After Life has been a massive Netflix success with the series ending in January this year. The creator, writer and producer Ricky Gervais, 60, has taken to Twitter to address accusations he “lied” about the dog Brandy’s death in the show.

“But how do you think Tony carried on after Brandy passed? Would you ever consider writing a special episode on his life without her?”

In view of his 14.7 million Twitter followers, Ricky replied: “I think he was strong enough by then to cope. Maybe he even got another dog.”

JamesSedge was infuriated with this response, as he added: “That may be so. But you LIED in the run up to the release of the last season when you said the dog doesn’t die!

“At best you were cavalier with the truth! I don’t know how you can look Pickle in the eye every morning! B******d.”

“The ending was playing with time. It was basically saying that everyone will eventually die, but not yet.”

Many social media users took to the thread of the post to stick up for Ricky and comment on the series ending.

AbTorna added: “Some of those scenes seemed so real, I love how you embrace weird or quirky people.

“I kept thinking they must have done so many takes just to keep a straight face in most scenes. Loved it!!”

Daveb2017 commented: “I just like how he seemed to get everyone else together at the end.”

Ricky has regularly defended that he was not going to kill the dog in the final series of the show.

One social media user LevonZahkar tweeted in January: “Why did the dog disappear with Lisa in the last scene?”

To which Ricky cryptically responded: “It was playing with time. We all die eventually, but not today.”

Throughout the series, fans have been on an emotional rollercoaster with many of them rooting for Brandy who ultimately saved Tony’s life.

Brandy truly became the epitome of man’s best friend and was there as a shoulder to cry on when Tony needed additional support.

In an interview with Graham Norton, the actor revealed he would miss the German Shepherd when they finish production in-between seasons.

Brandy, whose real name is Anti, even appeared on BBC’s The One Show alongside comic Ricky when he was promoting the series.