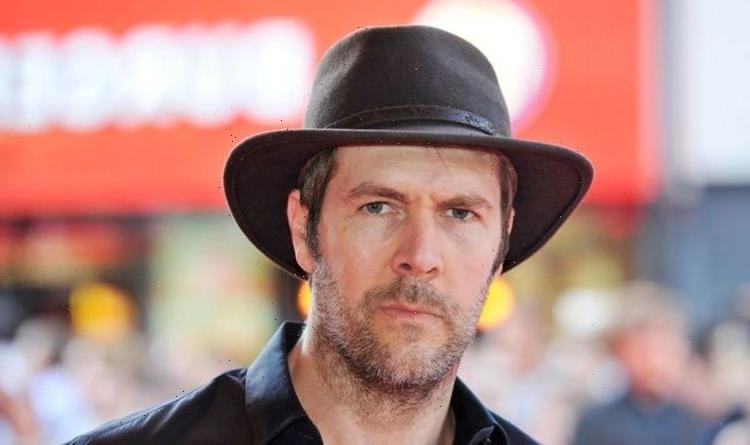 Comedian Mr Gilbert was confirmed to replace Mr Knowles on the BBC One show after the presenter’s reported contractual dispute with the broadcaster over an advert. Mr Knowles is currently fronting Channel 5 program Nick Knowles’ Big House Clearout, which sees the presenter offer families across Britain a DIY makeover, provided they are willing to clear out half of their possessions. However he confirmed last week on This Morning that he would not be returning to the programme for the Children’s In Need special this year.

Mr Knowles, who has hosted DIY SOS since 1999, said: “I’m just missing one that they’re filming this September which is the Children in Need one.

“Rhod Gilbert has very nicely stepped in and there’s a real heart, real empathy, so I think he’ll do a great job.”

Mr Gilbert, who is an award winning stand-up, will step into “Nick’s enormous steel toe-capped boots”.

He said: “I’m looking forward to joining the infamous DIY SOS team and rallying an enormous group of local volunteers on a wonderfully ambitious and important project.”

The Welsh funny-man, who was nominated the Edinburgh Fringe’s Perrier Best Newcomer Award in 2005 at the festival’s main award three years later, admitted he suffered from chronic shyness from a young age.

In a 2018 Mr Gilbert told Wales Online: “When I was in university in Exeter I didn’t speak to anyone at first, [I] couldn’t bring myself to do it and it went on that way for ages.”

“I wouldn’t go to the canteen like everyone else.

“I’d instead choose to buy my food from the local petrol garage and then I’d eat it alone in my room.

“I’d end up missing loads of lectures too, until one day my tutors took me to one side and gave me a friend.”

He explained that the friend, named Stuart McDonald from Monmouth, took him “under his wing” and “dragged [him] out of [his] shell.”

Mr Gilbert added that his social anxiety dated back to his school days.

He said: “I’d even refused to go to school when I was in primary school and if you look at any class photo with me in it I’m always the kid with his hand in front of his face, or turning away from the camera.

“In Cubs camp I even locked myself in a portaloo for virtually the whole weekend.

“Honestly, I’d have some bawling rows with my parents about it – they’d be like ‘that’s it Rhod, we’re getting the doctor out’”.

Naturally, the shyness was also crippling in Mr Gilbert’s early years as a stand-up.

He said: “When someone persuaded me to do a comedy course in 2002, I ended up skiving off most of it.

“I’d ring up from the pavement outside the venue and say I was too ill to make it in and once I’d hung up, the sense of relief would be palpable – I felt like I’d been let off the hook.”

However, as the comedian found success, his confidence grew.

Mr Gilbert added: “Becoming known, having some sort of minor celebrity, became like a lightsaber or a protective suit, because whereas before I’d be scared of social situations […] I now have the upper hand.

“Horrible way to phrase it, I know, but these days if anyone comes up to me I already have an idea of what they’re going to say, so I’m prepared.”

Mr Knowles is expected to return to DIY SOS next year according to a statement which read: “Both Nick and the BBC have resolved the issue recently reported relating to Nick’s commercial agreements and BBC guidelines.

“With the campaign still running, Nick will step back from the DIY SOS Children In Need special this year but will be back on our screens in 2022.”

Who is Bez from the Happy Mondays and what's his net worth?