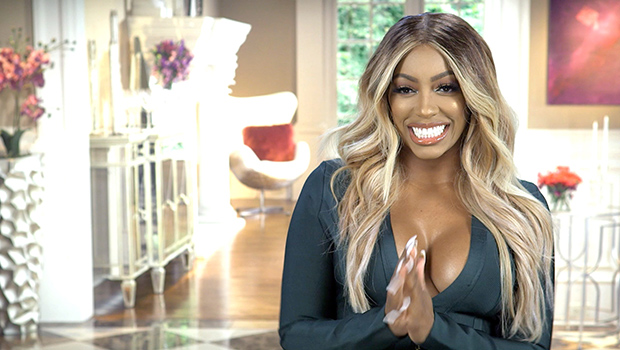 Porsha Williams gave her boyfriend, Dennis McKinley, the surprise of a lifetime for his birthday, during the Dec. 9 episode of ‘The Real Housewives of Atlanta’! Get all the details on her special reveal, here.

So sweet! Thanks to the Dec. 9 episode of The Real Housewives of Atlanta, we finally discovered how Porsha told boyfriend Dennis McKinley that she’s pregnant with their first child. The special reveal came in the last few minutes of the episode, when Porsha first surprised Dennis with a home-cooked breakfast. Well, she didn’t cook it — a chef did — but she still presented the delicious spread to him when he joined her in the kitchen. It also appeared that she was sipping on some champagne, but she later revealed it was sparkling cider — it was all part of the plan. Anyway, before she broke the news, Dennis gifted her with a gold diamond necklace even though it was his birthday. But then, when he opened his gifts to find a cute pair of baby shoes and a onesie, he realized he received the better present. And that’s when Porsha confirmed, “I’m pregnant.” So cute, right?

And this reveal came after Porsha sat down with Kandi one-on-one — their first face-off in years — to discuss the ongoing situation over Dennis’ past. Kandi explained why she felt the need to share what she had learned about Dennis, mainly because she thinks it’s weird that he’s tattooed so many women’s names on his body, but Porsha didn’t care. Instead of asking for more details, Porsha told Kandi she wouldn’t be seeking any more information about her boyfriend from her. We thought it was odd that she wouldn’t at least look into the situation or question Dennis’ motives, but maybe it’s because she was already pregnant during her sit-down with Kandi. She did order a fruit punch after all.

Meanwhile, NeNe threw a couples’ event to celebrate the love they all share, but things took a turn when an old “friend” of Eva‘s showed up. Apparently, this person was someone Eva went to school with, but when Eva failed to remember her, the woman got completely butt hurt. And she had already downed one too many drinks, so when it was her time to talk, she went into Eva hard. She basically said, “How could you not know me? I was fabulous!” All the other ladies rolled their eyes and Eva tried laughing it off. Awkward!

Finally, Cynthia dealt with the prospect of Lake Bailey becoming an empty nest as she and her ex started prepping their daughter for college.

CIA Spy Imprisoned In Russia Seeks Help From Trump: 'My Family Is In Danger'