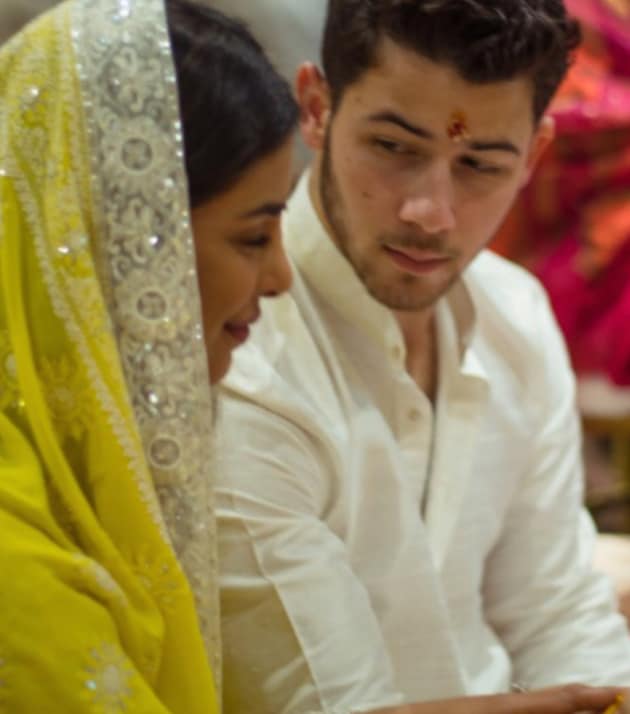 Remember earlier this year when we found out that Nick Jonas and Priyanka Chopra were dating and everybody was like “huh, weird”?

They just seem like a very strange match, that’s all.

Priyanka is just so amazing — she’s talented and intelligent and gorgeous and she does so much charity work.

And Nick is cool too, and maybe we’re wrong for not letting him move past his Disney boy band beginnings, but … come on, he’s a Jonas brother.

But hey, just for now, let’s put aside any odd feelings we have about this relationship, all right?

Because Priyanka and Nick just got married!

The wedding took place today in India, at the Umaid Bhawan Palace in Jodhpur.

Unfortunately we don’t have any photos of her dress yet, but we do know that the bride and groom, as well as the entire wedding party, wore designs by Ralph Lauren.

Nick’s father officiated the wedding — it was a Christian ceremony, and tomorrow they’ll have a Hindu one.

Ahead of the wedding, they had a mehendi ceremony, a tradition for Indian weddings in which the bride gets henna designs placed on her hands and feet.

Nick and Priyanka actually explained this in statements on their Instagram accounts today.

“One of the most special things that our relationship has given us is a merging of families who love and respect each other’s faiths and cultures,” they wrote.

“And so planning our wedding with an amalgamation of both was so so amazing.”

They explained that “An important part for the girl in an Indian wedding is the Mehendi.”

“Once again we made it our own and it was an afternoon that kicked off the celebrations in the way we both dreamed.”

The celebrations included a sangeet — another Indian wedding tradition that’s essentially a huge party with lots of food, music, and dancing.

Reports say that during this event, Priyanka danced for Nick, and he sang for her.

There were also fireworks, because why wouldn’t there be?

Their wedding took place nearly four months exactly after their engagement, which happened just a couple of months after they began dating.

But they say that when you know, you know, and when Nick shut down an entire jewelry store in London so he could choose an engagement ring, there’s a pretty good possibility he knew.

As he explained in an interview in September, everything “was kind of immediate, and I think we just knew it was right and jumped right in.”

And thanks to another interview from earlier this year, we have a good idea what’s going to come next for these two!

“I definitely want to have kids,” Priyanka declared back in June, shortly after she began dating Nick.

“It’s going to happen in the next 10 years. Well, hopefully earlier than that.”

24 Celebrity Weddings That No One Saw Coming


If they keep moving so fast, we can’t help but imagine that baby news can’t be too far off!