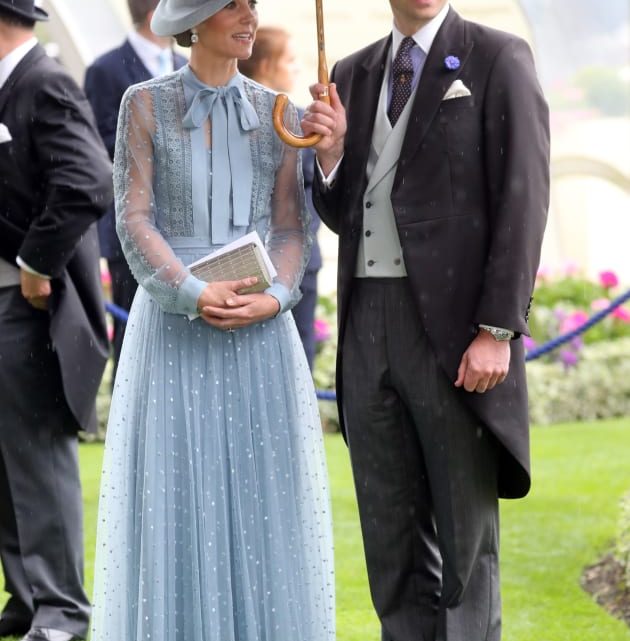 I must say, I don’t think air transportation has ever been as stressful of a matter as it is right now for the royal family.

After Meghan Markle and Prince Harry were recently under fire for taking private jets on vacation, Prince William and Kate Middleton are now flying (eek!) commercial.

Earlier today, Will and Kate were spotted on a FlyBe commercial flight from Norwich, England to Aberdeen, Scotland, according to pictures obtained by the Daily Mail.

We’re really not sure why they did this.

Maybe they were trying to make a dig at Meghan and Harry? Or maybe *probably* they were just steering clear from critics?

We can’t say, but we find their predicament of having to associate with commoners in an airport hilarious.

Of course, they decided to make their adventure a family affair and brought along George, Charlotte, Louis, and their nanny, Maria.

William was spotted walking alongside his children while carrying the family’s bags, as Kate followed closely behind with their baby boy — you know, the typical airport stroll.

“We were delighted to welcome the Duke and Duchess of Cambridge and their family onboard one of our flights again,” a FlyBe representative told E! News.

The kids wore cute and casual clothing for their trip, according to the outlet.

George wore a striped shirt and shorts, while his 4-year-old sister donned an adorable patterned dress.

Louis wore a collared shirt and shorts, and Kate, who obviously didn’t care about blending in, wore a chic pencil skirt and top.

According to a passenger who was on the flight, the royal’s presence somehow didn’t cause that big of a scene.

“The family were sat [sic] right at the front,” said the passenger. “I fly this route all the time and we were none the wiser.”

“No one knew they were on the flight. Later on, I realized that Kate’s mother was sat [sic] a few rows in front of me.”

Ok, what? This passenger sounds so unfazed.

Kensington Palace refused to provide any details about their trip to Scotland, with a spokesperson saying, “We do not comment on what they do with their private time as a family.”

Although, it’s believed that they’re there for a second summer vacay or to visit with the Queen and Prince Philip at Balmoral Castle.

Either way, we just hope their bags made it!

Before Will and Kate took off on their commercial plane, Meghan and Harry were at the face of backlash a few days ago for flying private to Nice for a family getaway with their son Archie.

People (but mainly the British Press) were super upset about their means of transportation because of their environmental stances.

And while we see their point, we believe it makes more sense for the highly publicized fam to travel in the safest way possible — and to not feel shame for doing so!

Many celebrities thought so too and supported the royal couple’s decision to fly privately.

Sir Elton John, who the family was going to visit at the time of their controversial travels, clapped back at the critics, saying he was “deeply distressed” by the “distorted and malicious” reports.

Ellen DeGeneres also shared her voice on the matter, begging people to have more empathy.

“Imagine being attacked for everything you do,” Ellen suggested. “When all you’re trying to do is make the world better.”

Yes, Ellen! There is enough to worry about in this world, who really cares how one decides to travel?

Besides, the duchess deserves praise not shame!

Just yesterday, the couple’s Instagram account posted footage of Meghan attending a photoshoot for the Smart Works capsule collection, which aims to provide women entering the workforce with appropriate clothing.

So haters, take a hike flight!