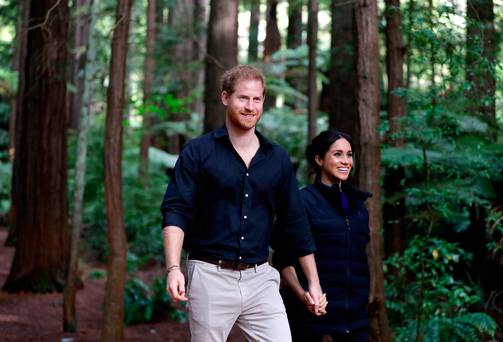 One of Princess Diana’s confidantes has described Prince Harry as being “besotted” by his wife Meghan Markle.

Lady Colin Campbell, who developed a close relationship with Harry’s late mother in the ’90s, appeared on a documentary chronicling the reported rift between Meghan and sister-in-;aw Kate Middleton, and by extension Prince William as their relationship has changed significantly since Harry settled down.

Campbell still maintains close royal associations and said Harry has “considerably changed” since meeting the actress, in better ways for the most part, like cutting down on alcohol, quitting smoking and becoming more grounded in his life in general. But the biggest point of interest is how these personality changes have affected the long-established dynamic between the brothers and Kate, who has been part of their lives for 15 years.

“Everything I hear is that Harry is completely beguiled by Meghan and completely enthralled to her and has changed considerably,” she said on Channel 5’s Princesses at War programme. “People do change when they get married.”

It is claimed that Harry and William’s relationship was significantly fractured when the elder questioned Meghan’s suitability within the royal family, raising concerns that their romance was moving so quickly and little was known about how she would cope with life in the fishbowl, describing the rift, which took place after the couple announced their engagement as “far more serious” than their normal brotherly ribbing.

“William was quite concerned that the relationship had moved so quickly and being close to Harry, probably the only person close enough to say to Harry ‘this seems to be moving quickly, are you sure?’ And I think what was meant as well intended brotherly advice just riled Harry,” royal author Katie Nicholl said.

“Harry is hugely protective of Meghan, he saw that as criticism, he interpreted that as his brother not really being behind this marriage and I don’t think things have been quite right ever since.”

It would explain where the persistent rumours of tension between Meghan and Kate first came from, although the foursome were determined to put on a show of unity on Christmas Day, their first appearance together since they were plagued by claims that there is more division behind palace gates than there has been in years.

All of this moves towards the division of the ‘Fab Four’ expected to take place after the Duke and Duchess of Sussex welcome their first child and move from working under Kensington Palace’s umbrella and create their own court to focus on their specific agendas and responsibilities, as reported by the Sunday Times. Royal expert Sally Bedell Smith said that Harry’s recent wedding “changed the dynamic” as he begins to forge his own path separate to that of his brother, who is second in line to the British throne and therefore has a clearer path of what’s expected in comparison to his younger brother.

“The arrival of Meghan has changed the dynamic of the relationship in a fairly significant way,” Ms Smith told People.. “It is inevitable and practical because it gives Harry and Meghan some freedom to build up their own collection of interests and charities.

“Meghan has very strong views on what she is interested in and that may be what Harry shares, but not what William and Kate share.”

In November, after the article was first published, Smith told Vanity Fair that the brothers’ closeness was always as an “anomaly”, especially compared to Prince Charles and his siblings.

“It was always an anomaly for Harry and William to be so close,” Smith said. “When you look at Charles and his siblings, there was never that closeness. Because of Charles’s status as heir, he has inevitably been in a separate category, and now I think the same will be the case for William. His life is moving along a different path from Harry’s.”