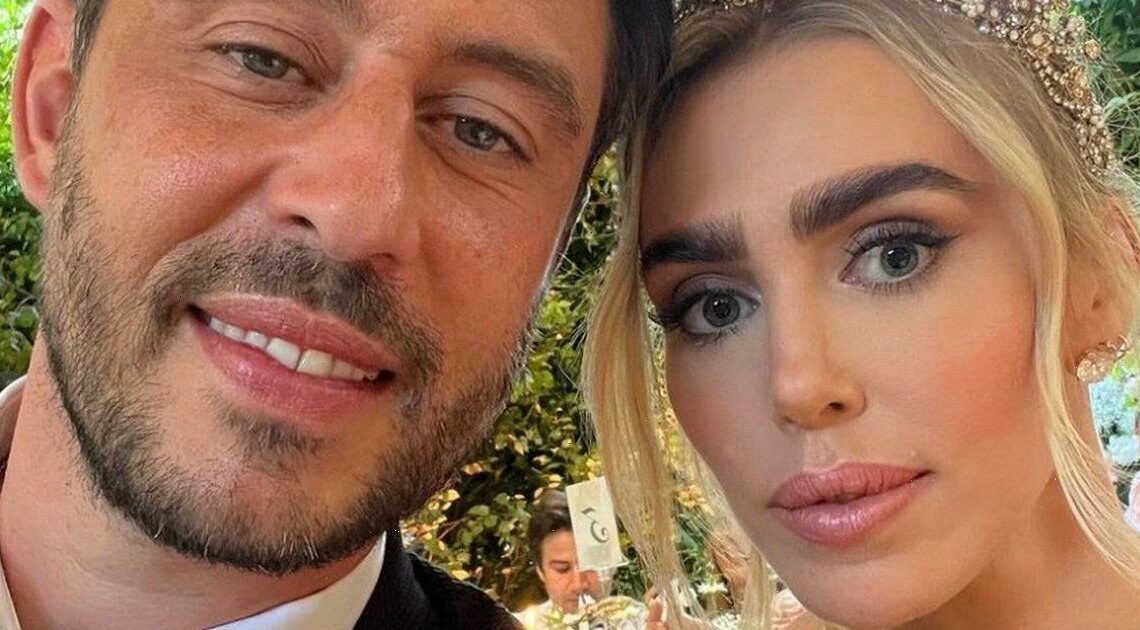 Petra Ecclestone and her fiancé Sam Palmer have tied the knot in an intimate ceremony in London on Saturday 17 July.

The daughter of former CEO of Formula 1 Bernie, 91, who recently said he "would still take a bullet" for Vladimir Putin, wore a stunning white gown with a plunging neckline and floral embellishments all over it for the lowkey celebrations.

The news was announced on Sam's Instagram page, where he first took to his stories to share a snap of his hand with a gold band around his ring finger. He captioned it: "I can't believe I'm a married man".

He later posted a series of photos to his main feed, including a selfie with his new bride, looking gorgeous with her blonde mane up into a low ponytail, with two strands out to frame her face. She donned a gold floral-themed tiara on her head to complete the ensemble.

Keeping the make up simple, she wore black eyeliner with a lightly smokey eyeshadow, which she teamed with a pink lipgloss.

Meanwhile, Sam donned a black suit with a bowtie as his hair was brushed to one side for the special occasion.

Returning to his stories, Sam offered some more detail into his wedding celebrations with Petra, which he enjoyed with the likes of football star Cesc Fabregas and Petra's sister Tamara.

Rock band Razorlight played incredible songs, such as America and Somewhere Else, where lights of red of white flooded the stage and people cheered in the background while singing along.

Ending the star-studded night with the love of his life, Sam then shared a photo of the 1980 FA cup, which was gifted to him during the night.

"Going to sleep with the 1980 FA Cup next to my bed. It has got to go down as the greatest wedding gift of all time," he wrote over the snap.

A final photo saw him and Petra holding the cup together as they smiled for the cameras.

Among the celebrity comments was Denise Van Outen's ex, Eddie Boxshall, who recently posted a selfie of himself after she made her red carpet debut with her "new man". He wrote: "Congratulations to you all x"

Fans of the couple were also quick to share their congratulations and gush over them as one person wrote: "What a beautiful bride & family. Wishing you every happiness!!" followed by two clinking champagne flute emojis.

"Congratulations to you both @petraecclestoneofficial @sampalmerofficial So happy for you both and the kids," another shared with two red heart emojis, two praying hands emojis and a kangaroo emoji.

While a third added: "So chuffed for you all, beautiful family you have xx".

Prior to tying the knot with Sam, Petra was married to James Stunt, who she had three children with. The pair decided to part ways and divorced in 2017 after six years together.

Petra and Sam welcomed a daughter together during the pandemic back in 2020, before they married.