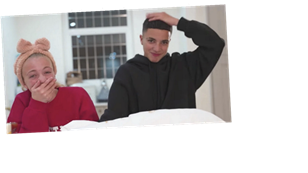 Peter Andre's daughter Princess was left horrified after her brother Junior farted in one of her YouTube videos.

The 15 year old was attempting to show his sister how to cut a packet of flour open in the clip as he asked her to hold it up by both ends as he started putting a knife down into the centre.

However, before he could puncture the white plastic, he let one rip, leaving both himself and 13 year old Princess in shock and laughter.

Princess, who wore a peach-coloured headband on her head alongside a hot pink jumper, immediately covered her mouth and shouted: "You just farted."

Mysterious Girl singer Peter's little girl then shouted again before covering her nose in her jumper as she continued: "Oh my gosh. That smells like rotten egg."

Junior, who could be seen wearing a simple black oversized jumper himself, attempted to play it cool as he looked off into the distance and asked: "What happened? What happened man?"

His sister, who recently shared a loving tribute to her step mum Emily on her birthday, then mocked him as she asked: "Is that why you've gone red?" to which he responded: "No, I don't go red."

The brother and sister duo teamed up for the clip where they answered general knowledge questions. Every time they got one wrong, they had to dunk their faces into a pile of flour, which they added other ingredients onto to make it sticky.

The youngsters have been spending time with their father Peter, 47, while their mum Katie Price, 42, has been enjoying a romantic holiday in the Maldives with her boyfriend Carl Woods, 31.

And clearly the apple doesn't fall too far down from the tree, as Katie was recently left in fits of laughter as her beau Carl branded her "stinky".

While there's no doubt the pair have been enjoying a romantic time together, things appeared to take a bit of a turn one evening after a meal out.

Former Love Islander Carl took to his Instagram stories to share a clip of himself covering his nose after smelling something bad as his other half bursted into hysterics.

He then shouted: "Oh!" before saying: "You stink!" as Katie continued to giggle. She then confessed she "couldn't help it".

It comes as former glamour model Katie reportedly "can't wait" to take a pregnancy test as she's been trying for baby number six with her beau.

Mum-of-five Katie is reportedly hoping to take a pregnancy test upon her return to the UK, after she ditched contraception and bought an ovulation kit to conceive with Carl.

Katie is understood to have told friends how she and Carl have been “at it like rabbits” during their luxury trip.

A source has said: “After almost three weeks in the Maldives she's convinced she's pregnant – they've had a really romantic holiday and haven't been able to keep their hands off each other. They've had the best time and have loved every minute together – Katie can't wait to take the test to see if she's going to be a mum again.

“She's been so happy and relaxed in the Maldives and hopes the stress-free environment has helped her to fall pregnant,” they added to The Sun Online.

Clare Crawley and Dale Moss Are Engaged! Here's How The Bachelorette Proposal Went Down
World News