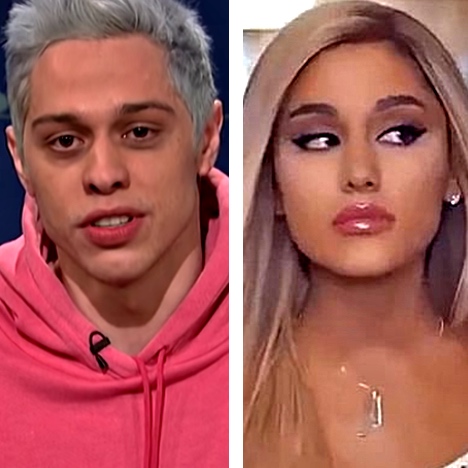 Pete Davidson ventured out on to social media for what is these days a rare post. Taking to Instagram, Pete called out all the people who don’t know him but who still find it fun to wish him ill on the Internet, even knowing about his struggles with mental health issues.

“I’ve been getting online bullied and in public by people for 9 months,” Pete wrote. “I’ve spoken about BPD and being suicidal publicly only in the hopes that it will help bring awareness and help kids like myself who don’t want to be on this earth,” he continued. “No matter how hard the internet … tries to make me kill myself, I won’t.”

On her Instagram stories, Ariana wrote an initial response. At first, she suggested that people (meaning her fans) be more forgiving, but claimed that while she cared a lot about Pete she hadn’t seen a lot of the bullying because she had been “blocked” by her ex — which might strike some as a little bit of a petty comment / jab to insert into the middle of her statement.

Of course, beyond the jab, having someone as sensitive to social media as Ariana make the claime that she had not noticed the bullying of Pete seems a little hard to believe. Especially given that even her manager, Scooter Braun, felt that he needed to say something to Ariana’s fans last week about their brutal treatment of Pete, reportedly writing, “Stop the bulls**t … Pete is a good dude. No one has hate for this guy and he is a stand up guy. Show respect …”

Later, Ariana seemed to have considered the situation more carefully and posted a longer, thoughtful response that more directly addressed the actions of her fans –

i know u already know this but i feel i need to remind my fans to please be gentler with others. i really don’t endorse anything but forgiveness and positivity. i care deeply about pete and his health. i’m asking you to please be gentler with others, even on the internet … I will always have irrevocable love for him and if you’ve gotten any other impression from my recent work, you might have missed the point.”

We have Pete and Ariana’s full statements below.