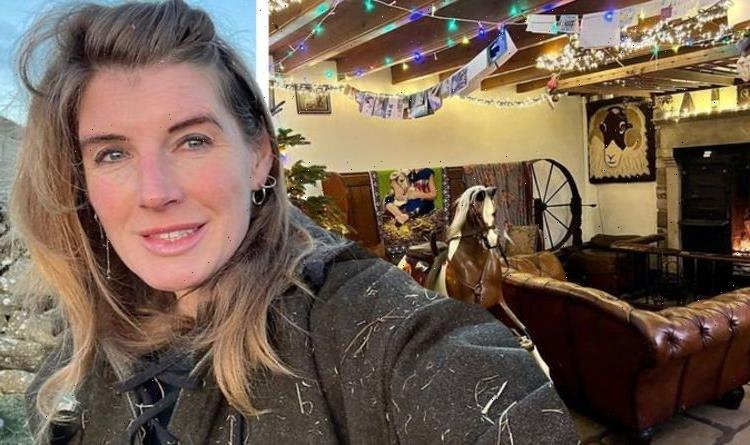 Fans of Our Yorkshire Farm are used to seeing Amanda Owen, 47, out and about on her 2,000 acre estate but as Christmas Day gets ever closer, she decided to show off the decorations inside her country home instead. And it’s safe to say, her followers loved it.

But it’s beginning to look a little like Christmas!

Taking to Instagram, Amanda showcased her fairy lights, Christmas tree and hanging cards in a series of snaps.

They also included one of her young daughters preparing sprouts, ready for their Christmas Day feast.

Rushing to the comments section of the post, fans were in awe of how cosy her decorated living room looked.

“That looks so lovely and Christmassy,” one said.

Another agreed: “Love it, so cosy!”

A fourth said: “So lovely, wishing your family a wonderful Christmas.”

“Always best to get your sprouts on early!” a fifth advised.

The run-up to Christmas is always a busy one, and it was made worse for thousands of people across the UK who were left without power after Storm Arwen ravaged the UK.

Amanda and her family were among those affected, and she opened up about their experience on Lorraine.

The mother of nine said: “With the storm, we’ve had no electricity [and] no water.”

A concerned Lorraine quizzed her guest: “How did you get on with that storm?

“Were you okay?” the concerned ITV presenter asked.

The TV author replied: “We are okay because we’re all here.”

Amanda added: “Yes, it has had its high points and its low points.”

Footage of Amanda’s snowy farmland mid-storm was played in the ITV studio which saw gusts of winds blowing across the picturesque landscape.

The Channel 5 shepherdess pointed out: “This was last week.”

The Scottish presenter was in awe of the snowy setting shown in the film and exclaimed: “Wow!”

Amanda described one of her lowest moments during the power cut.

She said: “I think [the] low point was when tea was actually fried eggs and champagne.”

In jest, Lorraine suggested: “Fried eggs and champagne is the way forward maybe?”

The Yorkshire writer saw the lighter side of the ordeal and she remarked: “Exactly”

Lorraine then retracted her statement after she stated: “I’m not sure.”

Amanda detailed her ordeal as being “being plunged into darkness” and “[living] in sub-zero temperatures”.

But the presenter expressed her positive outlook on the event after she added: “But somehow you get by.”

The Huddersfield-born author agreed, as she insisted: “Of course!”

According to The British Red Cross, Storm Arwen left more than 150,000 homes in Britain without power.