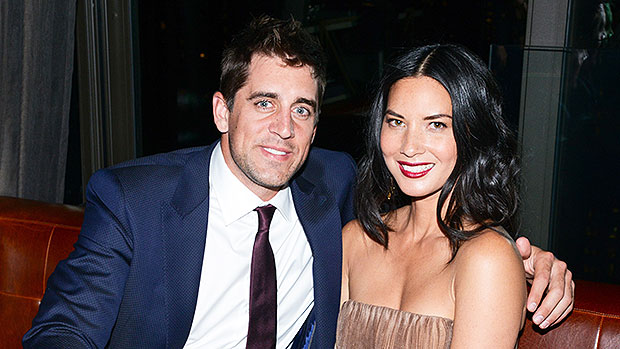 Olivia Munn is on board with the news that her ex Aaron Rodgers’ feud with his family may finally be over. Here’s what she had to say about it.

If Aaron Rodgers has really healed the rift with his parents and his brothers, his ex-girlfriend Olivia Munn is pleased for him and them. The 38-year-old actress said as much when speaking to TMZ Sports in a video the site posted on Dec. 7, four days after the NFL star hinted that his years’ long feud with his family may finally be over. Asked about her thoughts on the matter, Olivia said, “Oh my gosh, if that’s true, that’s amazing. It’s long overdue.”

Olivia and Aaron, 35, dated for nearly three years before splitting in April 2017. During that time the former Newsroom star was often accused of contributing to his estrangement from his parents Edward and Darla, and his brothers, including The Bachelorette alum Jordon Rodgers. But in a May interview with Andy Cohen on the Bravo star’s SiriusXM radio show, Olivia said that the football player “hadn’t spoken to [his] parents” before they started dating in 2014. She also said of the Rodgers rift, “I don’t think either side of the road is clean, but I do think it’s not OK when you try to stand on someone’s shoulders and then throw dirt in their face, which is what I think they did with him.”

That, it seems, may all be (to use a cliché) water under the bridge, as on Dec. 3 Aaron hinted that he had reconciled with his “folks,” during a locker room interview with Packers.com. Asked how he reacted to news that the Green Bay Packers had fired head coach Mike McCarthy, he said, tellingly, “I found out I’m sure the same way that most of you found out. I was at home with my folks in town for my birthday.”

Aaron’s subtle hint came just over two weeks after Jordan, 30, accused his brother of not contacting their parents during the deadly California wildfires. After Aaron tweeted an appeal for people to contribute to donate money to a rebuilding and recovery effort, Jordan retweeted the message adding, “PLEASE DONATE, SPREAD AWARENESS & SEND LOVE. But when your own Mom is home alone during the fires, car packed ready to evacuate, & you miss the fundamental first step of compassion; calling your parents to make sure they are safe…. Everything else just feels like an act.”

Inside ‘Scarface’s’ Sometimes Rocky Road to Becoming a Classic