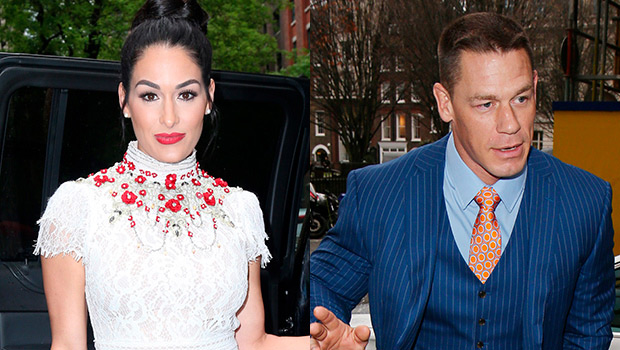 Nikki Bella may have just thrown some major shade at ex John Cena on Dec. 7 when she hinted that she was done with people ‘coming in and out’ of her life in a new interview.

Nikki Bella, 35, seems to be done with ex John Cena, 41, for good and she hinted at those feelings when she recently gave a not-so-cryptic answer to an Ariana Grande song-inspired question. When interviewed by BuzzFeed in their booth at Jingle Ball on Dec. 7, the brunette beauty took part in some fun when she answered what was supposed to be some lighthearted questions. When the outlet asked her who or what she was saying “Thank u, next” (Ariana’s new tune) to in 2018, Nikki didn’t hesitate to say, “People who come in and out of your life. I guess I gotta say, ‘Thank u, next’.”

Although she didn’t mention John directly, we can’t help but think she totally meant him with her answer since their relationship was very on and off over the past year. The former lovebirds called off their engagement back in Apr. only to reconcile a few months later in June. By July, though, they were officially done and from the sounds of Nikki’s latest remark, it seems this time, it stuck.

Nikki’s “Thank u, next” comment seemed apparent when she moved on from John by recently going on a date with The Bachelorette‘s Peter Kraus. Despite the night out, however, friends claim there just weren’t any sparks between the two and they won’t be going out again. “While her date looked every bit like an episode of The Bachelorette — which included a ride on a gondola and sipping wine — fact is, there just weren’t any sparks for her to wanna lock down a second date,” a friend of Nikki’s told TMZ.