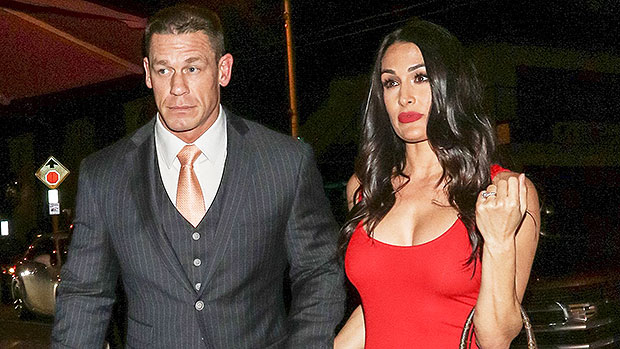 In the latest clip of ‘Total Bellas,’ Nikki Bella tells her twin sister Brie that it would still upset her to see John Cena with someone new.

Months after her split with John Cena, 41, Nikki Bella, 35, is admitting that it would still sting to see him out and about with someone new. In the latest preview for Total Bellas, Nikki returns to Napa, where she previously planned her wedding to Cena, for the first time since her breakup. When asked by Brie if she’d feel OK if she were to see John out with a new girlfriend, Nikki emphatically replied, “No matter what, the next time I see him with someone it’s going to kill me. I still have a long way to go. But honestly I’m ready for a new me… I need to start living as if I don’t care who’s — whether it’s my ex or no one else — watching me and afraid to hurt their feelings.”

Meanwhile, Nikki has recently started dating her Dancing With The Stars partner, Artem Chigvintsev, 36, and her family is over the moon that she’s finally moved on from John. “Nikki Bella’s family is so happy for her as she moves on from John Cena,” a source close to Nikki told HollywoodLife EXCLUSIVELY. “They’re honestly surprised at how quickly she was able to do so. When the breakup first happened, Nikki was so heartbroken. Her family worried that she would need a long time to fully move on, but Artem really put his best foot forward in trying to win Nikki’s heart, and she’s very smitten. It’s still new for them, but they have great chemistry together. Artem is heavily pursuing Nikki. Nikki really wants kids and her family had to constantly remind her that she couldn’t be with someone who didn’t want what she wanted. She is not going to settle. Nikki’s family knew Artem before and they really like him. They just want to see Nikki happy. She’d like to settle down and have a family sooner than later.”

Meanwhile, since a photo surfaced of Nikki and Artem kissing, a source close to John told us EXCLUSIVELY that he’s happy for the both of them. “He supports her and will always love her for the person she was to him and the time they had together,” our source told us. “If Nikki is finding love elsewhere, he is happy for her and has nothing ever bad to say about either of them. He hasn’t heard about them kissing, but he is not worried about it because that is what happens when you date someone. John doesn’t allow there to be any drama, as he doesn’t play high school games. Nikki is an amazing woman to him, and she should have the best life possible with anyone she wants.”

Nikki and John broke up on April 15, 2018. “While this decision was a difficult one, we continue to have a great deal of love and respect for one another,” the former couple revealed in a statement at the time. “We ask that you respect our privacy during this time in our lives.”

Derick Dillard Continues to Attack Jazz Jennings on Social Media: Is This the End of Counting On?!