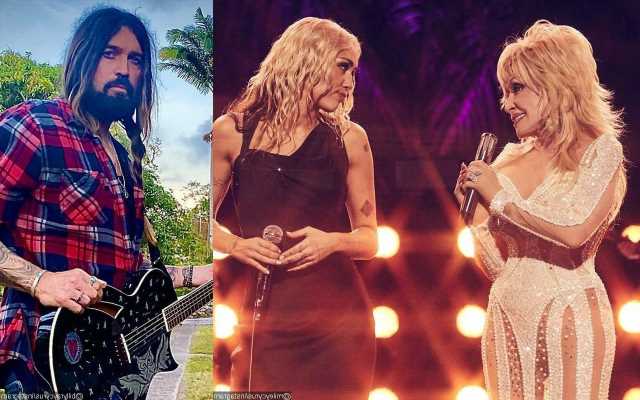 The fractured relationship between the ‘Flowers’ songstress and her father allegedly gets worse after his engagement to 34-year-old Australian singer Firerose.

AceShowbiz –Miley Cyrus has gotten help from her godmother Dolly Parton. If a new report is to be believed, the “Flowers” songstress has been leaning on the country star in the last couple of months as her family rift with her dad Billy Ray Cyrus continues to worsen.

Radar Online reported on Thursday, January 12 that Miley and the “Jolene” hitmaker, who performed together on New Year’s Eve in Miami, have been close ever since the former Disney Channel star was a young child. However, sources said that the 76-year-old has been acting as a lifeline for the troubled pop star of late.

“Some people are concerned that Miley is completely lost and alone,” a source told the outlet following Billy Ray’s engagement to 34-year-old Australian singer Firerose. Billy Ray and Firerose are currently living together in Tennessee.

It’s reported that Miley has been embarrassed by Billy Ray’s relationship with Firerose. “Miley knows she can count on [Dolly] for anything, anytime, that she’s there for her no matter what,” said the insider, “When she’s feeling overwhelmed or stressed, Miley knows a talk with Dolly will make things better.”

Miley has reportedly been infuriated by her dad’s relationship with Firerose which came months after the pop star’s mom Tish Cyrus filed for divorce. “Miley was already shocked and appalled that Billy Ray and Firerose were hooking up, so now that he’s stuck a ring on this gal’s finger, it’s a step beyond and a real kick in the teeth,” a source explained. “Miley’s very protective of her mom [Tish], and the consensus is that their dad’s being a jacka** and throwing his life and money away on this girl.”

Firerose, meanwhile, detailed the low-key proposal as saying, “Billy looked at me and said, ‘Do you, do you wanna marry me?’ And I was just like, ‘Of course I do. I love you.’ He said, ‘I love you. I wanna make this official. I wanna be with you forever.’ ” Firerose also shared that she designed her own ring with a diamond she chose after Billy Ray popped the question without a ring.

Why did Ashleigh Barty retire? | The Sun
World News