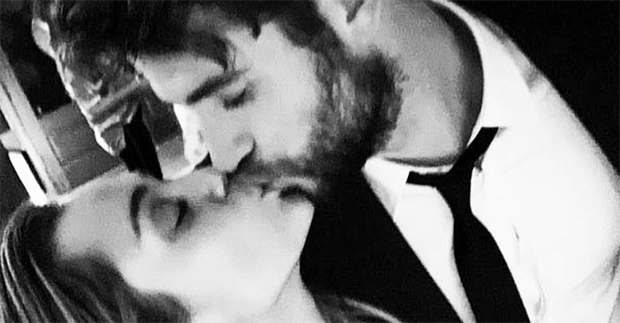 After word got out about Miley Cyrus and Liam Hemsworth’s secret wedding, their reaction may not be what you think. Learn details inside!

“Nothing Breaks Like A Heart” singer Miley Cyrus, 26, and The Hunger Games actor Liam Hemsworth, 28, got married in a secret wedding on Dec. 23 in Nashville, Tennessee. The intimate ceremony seemed like exactly what the two wanted – a small gathering with their closest friends and family, and not with the whole entire world.

They achieved that intimacy and warmth during the ceremony itself that they desired, but word got out about the event when Liam’s friend and wedding guest Conrad Carr shared a clip on his Instagram Story of the cake! How did Miley and Liam react? The bride’s older sister Brandi Cyrus, 31, revealed details on her podcast, Your Favorite Thing.

“It was very top-secret,” Brandi said. “Whenever they’ve [Miley and Liam] talked about getting married, they’ve always talked about wanting to keep it very small and it just be with the family and at the house. That’s always what they’ve wanted. Miley’s only friend that was there was her best friend Jessie. Liam had, like, a handful of friends that were there from Australia.”

“It really was a very, very small, tight-knit group of people,” Brandi continued. “And even with family and close friends, they still made a point to say, ‘Hey guys, this is a private thing for a reason. We love you all, but please don’t take photos.’” Brandi’s podcast co-host and 28-year-old Sarah Hyland’s boyfriend, Wells Adams, 34, brought up how Liam’s friend was the one who broke the secret.

“He feels really bad,” Brandi said. “I didn’t really ask what happened, but I think from what he says, no one told him not to post about it, so he just didn’t know.”

“I think because it was just so few of us, [Miley and Liam] just assumed everyone was smart enough to know [not to post],” Brandi continued. “He feels really bad, but it was just one of those things where like, I didn’t have my phone the whole night.”

Apparently, even though the private event became very public, the newly-married couple “doesn’t really care” that things didn’t go as planned, Brandi said. Miley and Liam got the wedding that they wanted, and that’s all they could really ask for!

Why Tom Brady Will Never Win Another Super Bowl