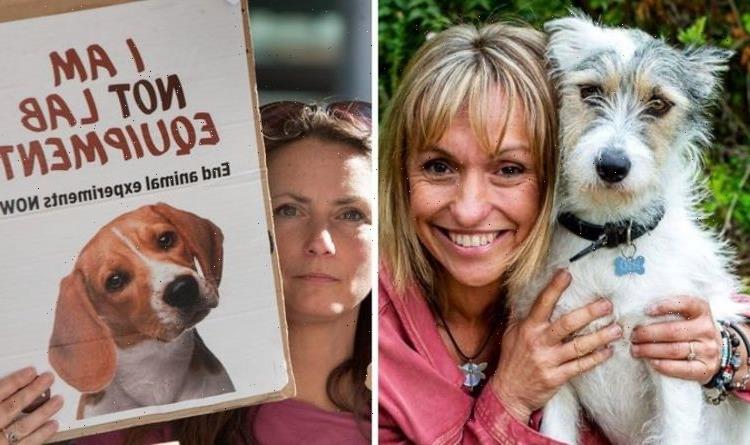 Michaela returns to screens tonight at 8pm for Autumnwatch on BBC Two. In tonight’s program Chris Packham reveals images of animals at night taken by a thermal camera on Wild Ken Hill in Norfolk. Meanwhile, Michaela ventures to the coast to discover why the Wash, in East Anglia is engulfed by migrating birds in Autumn.

Up in Scotland, Megan McCubbin takes a dip in shark-infested waters while Gillian Burke looks into the genetics of the red squirrel.

In September 2020, during a Brexit transition period, the broadcaster warned of a potential increase in animal testing when the UK permanently left the EU.

This is because the UK would no longer have access to the EU chemical regulator’s database.

Michaela tweeted to her 124,000 followers: “With only months until the end of the post-Brexit transition period, countless animals are at risk of duplicate tests for chemical registration in the UK.

“Join Cruelty Free International and ask your MP to call on the Government to rule out repeat animal testing”.

At the time concerns had also been raised in Whitehall that there would be an increase in animal testing post-Brexit.

The animal rights charity had launched a campaign to raise awareness of double animal testing after Brexit, as the UK would no longer be overseen by chemical regulator REACH.

REACH tests and occasionally restricts certain chemicals for use in items like shampoo and cleaning products.

However there were fears Brexit could lead to duplicate testing as products already cleared for use in the EU would have to be checked and cleared in the UK.

Ms Hayman told News & Star: “It was something that the EU brought in back in 2007.

“When we leave the EU we leave REACH.

“When I went to Brussels I spoke to some of the senior team at REACH ‒ they said we wouldn’t be able to use their system.”

On the issue being discussed in parliament Ms Hayman added: “They admitted it could be a problem.

“The idea hasn’t been sorted out ‒ we’re still in a transition period.

“The idea at the time was that it could be the health and safety executive but one of our arguments was that they wouldn’t have the experience and resources.”

“For the coronavirus vaccine they’re asking for volunteers.

“Why can’t they do that with other things? It’s products like make-up, surely you could get volunteers to test them.

“When we leave the EU I think it’s going to get worse.”

In August, British officials floated plans to allow animal testing to be used in cosmetics, which broke a two decade ban on the practice.

In 1998 New Labour banned the testing of cosmetic finished products and ingredients on animals, years ahead of a EU ban on animal testing for cosmetics in 2009.

The Home Office’s Animals in Science Regulation Unit warned that they could “update policy and regulatory guidance on the regulation of animal testing.”

Cruelty Free International Director of Science and Regulatory Affairs Dr Katy Taylor said in August this year that the Government is “relying once again on cruel and unjustifiable tests that date back over half a century.”

Cruelty Free International Director of Public Affairs Kate Postlewhite added that the Government was showing signs that there will not be proper protections on animal testing post Brexit.

Jana Duggar: Is Jim Bob Refusing to Let Her Get Married?