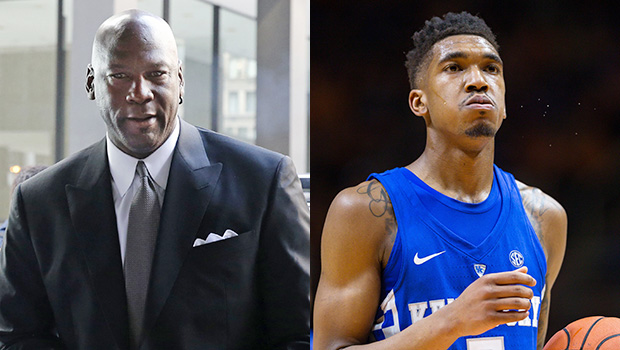 Woah there, MJ! Basketball legend Michael Jordan got a little too emotional during the Dec. 12 Hornets game and slapped player Malik Monk. Watch the exchange for yourself here!

During the Charlotte Hornets and Detroit Pistons game, Hornets teams owner Michael Jordan, 55, (and Chicago Bulls icon) got a little carried away — he slapped one of the players on his team! It all started when Malik Monk, 20, jumped onto the court after Jeremy Lamb, 26, swished a two-point shot when the game was tied in its final seconds. Malik’s happy dance on the court cost the Hornets a technical foul and game point, which is why Michael gave him a “tap of endearment,” as he called it.

It likely didn’t even occur to Malik that his innocent, joyful run on the court would result in a technical – he was clearly just excited! Jeremy’s shot pushed the Hornets to two points ahead of the Pistons, meaning they would probably win the game, and Malik just couldn’t contain himself. Unfortunately, his reaction got a little out of hand in the ref’s eyes, and MJ stepped in. A Twitter user caught the exchange and you can watch it all go down below! In the video, you can see MJ’s disappointed face and tap on Malik’s head.

Initially, MJ points at Malik and lifts his hands in a shrugging motion, as if he’s asking why Malik would decide to run on the court during the pivotal moments of the close game. Several onlookers can be seen watching the interaction go down. Then, MJ and Malik have a brief, heated conversation before MJ taps him on the head. Malik lifts his hands, seemingly confused about the hit, but it all seems okay by the end of the clip, with the team owner and player laughing it off. They even share a cute bonding moment before the video ends.

“It was like a big brother and little brother tap,” MJ said to the Associated Press. “No negative intent. Only love!” That might be the case, but next time, MJ, maybe think of showing your love through a hug instead! Anyway, even though the technical did cost the Hornets a point from their prior two-point lead, they still ended up winning the game, 108 to 107. All’s fair in love and basketball, right?!