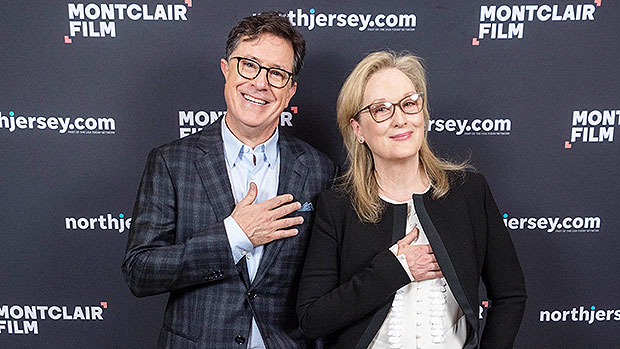 Meryl Streep had some pretty insightful words about the Commander-in-Chief, who has called her ‘one of the most overrated actresses in Hollywood,’ during the Montclair Film fundraising ‘Conversation’ with Stephen Colbert.

Donald Trump may have dissed Meryl Streep, the three-time Oscar-winning Best Actress, as “overrated” and a “Hillary Flunky,” but her fears about the president go far beyond name calling. Asked by Stephen Colbert, who conducted a 90 minute conversation with the New Jersey-born actress, 69, “What’s it like for you to see somebody who is the President of the United States… be indifferent to the idea of empathy?” Streep responded: “I’m scared. I’m scared by him… by his possibility.”

The conversation at the New Jersey Performing Arts Center focused on empathy, when Streep made the point, that being empathetic is essential for an actor. “Actors are natural empaths, they have to be. It’s part of the job description, like can you type 90 words a minute, can you empathize, can you feel what this person feels,” she told the packed house.

She also believes empathy is a necessity for a functioning society. “I think the greatest invention of the last 2000 years is forgiveness, And the ability we have to forgive and the people who have led the way on that — Mandela, Martin Luther King Jr.,” she told Colbert and that’s why, she finds it so terrifying that the current president has zero empathy for others.

She also confessed that when she was growing up, she never considered acting as a potential career, despite starring in high school theater productions. “I didn’t think it was serious… it’s not like now when it’s a viable career option. Nobody I knew in Bernardsville (her town) was going to be an actor… I never had that dream that I must go on stage,” she said, explaining that when she grew up, most young women went to college to primarily get an MRS degree, i.e. in order to meet a husband.

Nevertheless, she went on from an undergraduate degree at Vassar, to study drama at Yale as one of six women in her class, and has become famous for playing some of the most legendary women the world has known , including Miranda Priestly, a fictionalized version of Vogue editor-in-chief, Anna Wintour, in The Devil Wears Prada.

“The real-life people I’ve played, Kathryn Graham (publisher of The Washington Post), Margaret Thatcher (Prime Minister of Great Britain), Karen Silkwood (nuclear industry whistle blower), Isak Dinesen (Out of Africa author): These women are so much more than I could ever be,” she told Colbert. “It’s just such an honor, even people I disagreed with, to step into the shoes of people who were of such capacious mind, bravery, courage and they left a mark on their world. I feel very lucky to have been a translator of their lives and what mattered to them.”

As for what advice she’s give to a future actor, who played her, Meryl Streep. She replied, “silliness” and “opinionated.”

Well, we don’t know about silliness, but thank the Lord, she’s opinionated. And we hope she stays that way!