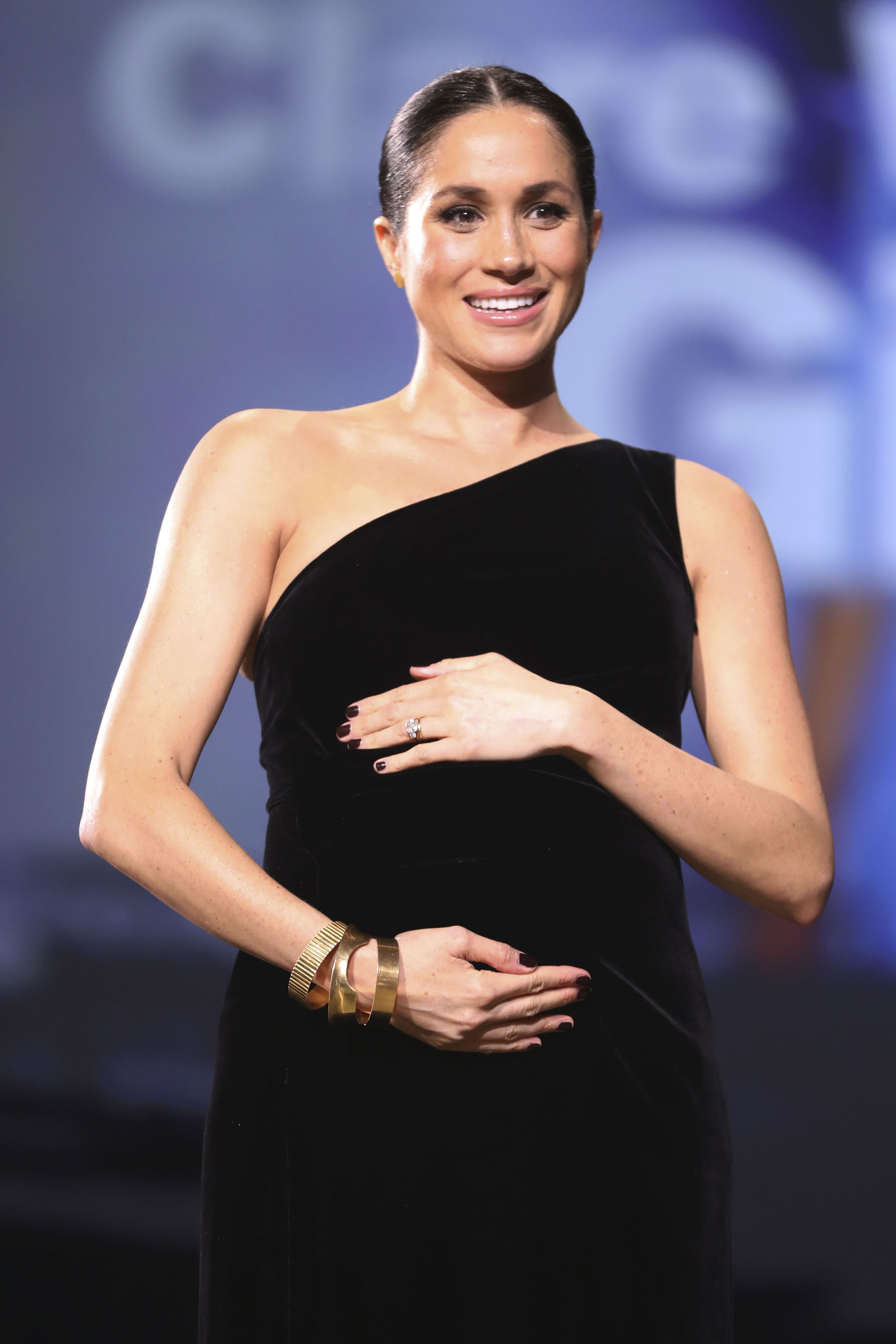 During her unannounced appearance at the British Fashion Awards at Royal Albert Hall in London, the mom-to-be, 37, was noticeably wearing black nail polish as she broke royal style protocol and strayed away from the aesthetic standard of delicate, translucent nail shades previously set by the Queen and Kate Middleton.

Meghan may have chosen to color coordinate her nails with her one-shoulder Givenchy black dress. After all, her appearance was to honor her wedding dress designer – Clare Waight Keller, artistic director of Givenchy – with the British Womenswear Designer of the Year award.

Though it’s an unofficial rule, it is widely known that the Queen finds colorful nail polish distracting. Bright hues are not banned for the royals, but nude colors are a more practical choice for official engagements. Although Kate does on occasion glam up her toes with a bright red pedicure on her feet, she has yet to be seen in public with a daring bright manicure.

Black nail polish is a rare choice for any royal family member but a longtime favorite has been Essie’s “Ballet Slippers”. The Queen has been using the bottles of the sheer, pale pink polish since 1989 when her hairdresser at the time wrote to the founder Essie Weingarten and described it as “the only color Her Majesty would wear.”

Fans of Meghan have come to know her as a style maverick. Her black nails were not the first instance of breaking royal style stipulations.

During her royal tour with husband Prince Harry in October, Meghan wore the Pineapple Dress from the American brand Reformation which featured a thigh-high slit.

In addition, she went out of the box in June by wearing a short-sleeve, off-the-shoulder Carolina Herrera dress when she made her Trooping the Colour debut. It was an especially daring choice since Kate has only worn dresses with sleeves that come past her elbow since attending her first Trooping in 2011, and Princess Diana never wore short sleeves to the official celebration of the Queen’s birthday.

Also, the royal family has an unspoken policy about wearing pantyhose in public. Like the nail polish, it is not a rule that’s set in stone, but Meghan is proving to change the royal fashion game by only occasionally opting for pantyhose. In fact, she joined the pantyhose club for the first time in May 2018, just three days after tying the knot, at a garden party at Buckingham Palace.

Since news of her engagement was first confirmed in November 2017, Meghan has made it clear from the start that she has her own take on royal style, serving up messy buns against all odds.

Although she has quickly adapted to many of the minutiae of royal dos and don’ts, she “has found certain rules in the royal household difficult to understand, like the fact that the Queen prefers women in dresses or skirts rather than trouser suits, and is often asking Harry why things have to be done in a certain way,” a source previously told PEOPLE.

“I think she finds it a little frustrating at times, but this is her new life, and she has to deal with it,” the source said.

Game of Thrones: Sophie Turner’s Net Worth, and What She’s Working on Next