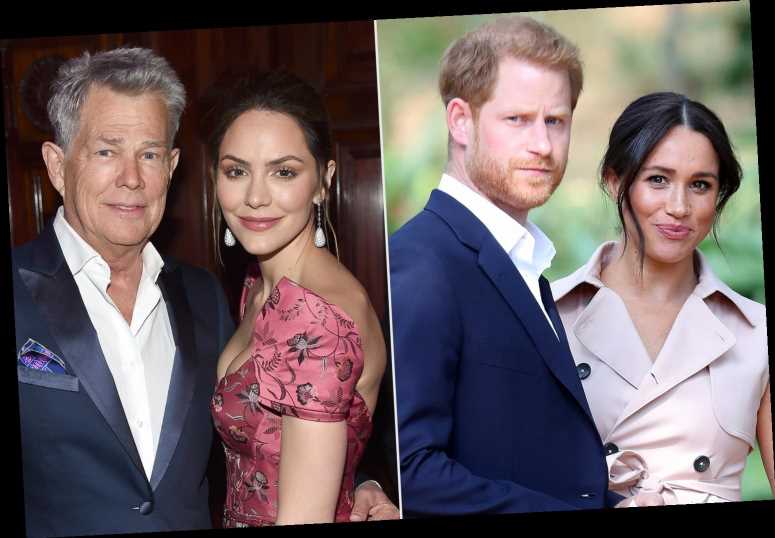 Meghan Markle and Prince Harry had a cozy date night with friends in California.

The couple was spotted enjoying a double date on Tuesday in Montecito with Katharine McPhee and David Foster, who recently announced they are expecting their first baby together. The outing marks the first time Meghan and Harry have been spotted out and about in the area since moving to Santa Barbara in July with their 1-year-old son Archie.

The two couples enjoyed a three-hour dinner at Lucky's Steakhouse. Meghan, 39, and Harry 36, arrived holding hands, staying safe amid the coronavirus pandemic by wearing masks and dining outdoors under the restaurant's covered patio.

After attending the same school together as teens, McPhee and the Duchess of Sussex reconnected last year — and now their husbands share a close bond. "We just stay in touch with them," the actress and singer continued. "But mostly, Meghan and I knew each other from childhood, but really Harry and my husband are friends. It's really nice." Foster revealed earlier this year that he arranged for the couple and their son to stay at a mansion on Vancouver Island in Canada owned by a close friend.

The Duke and Duchess of Sussex have since found their permanent home in the Montecito community of Santa Barbara. After their move to California in March, Meghan and Prince Harry stayed at Tyler Perry's Los Angeles estate with Archie as they transitioned out of their royal roles.

"They were craving a smaller community and a slower pace — Montecito is very mellow, a charming little town and the Santa Barbara [area] offers an ideal lifestyle that they’re looking forward to," a source close to the couple previously told PEOPLE.

The purchase of their new home (which came with a play structure for Archie!), about 95 miles up the Pacific coast from L.A., makes Meghan and Harry first-time homeowners. An insider says they put down a third of the cost and took out a mortgage for the other two-thirds.

“They feel the new house is a place of peace — and it offers inspiration to build Archwell [foundation], which they’re focused on,” the source added. Embracing their new home, the couple even have a print of the sheet music cover for California's official state anthem, "I Love You, California," leaning against their stone mantel. Fans caught a glimpse of the decor, which features a California grizzly bear clutching the state of California, during Meghan's recent Zoom call to celebrate the first anniversary of the workwear collection she launched for her Smart Works patronage in the U.K.

Since making their move to California, the couple has volunteered for several community service efforts, including delivering meals for Project Angel Food and handing out school supplies for Baby2Baby.

"What Meghan said is she wanted to show Harry Los Angeles through the eyes of philanthropy. It’s just beautiful,” Richard Ayoub, Project Angel Food’s executive director, told PEOPLE. “There’s obviously a great deal of love and selflessness between them."