‘Am I as old as your dad?’ Friends star Matthew Perry, 51, is outed for sending a girl, 19, cringe-worthy messages after matching on celeb dating app Raya

Matthew Perry is the latest celebrity to be outed for using the dating app Raya, following Ben Affleck earlier this week, and the Friends actor reportedly asked a 19-year-old girl, ‘Am I as old as your dad?’

Perry, 51, who is currently engaged to fiancée Molly Hurwitz, 29, can be seen in a new TikTok video flirting with TikTok user @kittynichole – real name Kate Haralson, who claims they matched on the membership-only dating service.

Haralson, now 20, shared the footage of herself with the caption: ‘When you match w Matthew Perry as a joke on a dating app and he facetimes you and plays 20 questions with you.’

Could this BE more embarrassing? Engaged Friends star Matthew Perry, 51, is outed for sending a girl, 19, cringe-worthy messages after matching on celeb dating app Raya

In the video, Matthew is seen smiling as he asks his potential date, ‘Do you always play with your hair this much?’ to which she responds, giggling: ‘I guess so.’

Haralson, a personal assistant who said she was 19 when Perry first contacted her, told PageSix on Thursday that she wanted to show how older men in Hollywood are ‘taking advantage’ of younger women on dating apps.

‘A lot of people were saying I’m a bully and mean for posting this, and it made me feel kind of bad, but at the same time, I feel like a lot of guys in Hollywood are talking to all these young girls and it’s something that I think a lot of people should be aware of,’ she told the outlet.

Haralson claims the FaceTime exchange happened in May last year, which is when Perry is said to have briefly split with his current fiancée Hurtwitz, who he had been dating since 2018.

The LA-based PA said she had matched with other celebrities before but wouldn’t ‘ever talk to older guys’ though she thought talking to the Friends actor ‘would be funny.’

Haralson, who said she ‘never even really watched Friends,’ claims that Perry asked her at one point, ‘Am I as old as your dad?’

In November last year, Perry announced the pair had got engaged, telling PEOPLE: ‘I decided to get engaged. Luckily, I happened to be dating the greatest woman on the face of the planet at this time.’

TikTok tell-all: It appears some TikTok users have started a worrying new trend of outing celebrities for using the dating service

Now THIS is a match: Perry, 51, got engaged to fiancée Molly Hurwitz in November last year having started dating in 2018 (though the pair were reportedly ‘on a break’ in May last year)

Meanwhile, a source claimed to Us Weekly last May, that Perry was on Raya, saying he was ‘messaging girls and getting back into online dating again.’

DailyMail.com has reached out to a representative for the actor, who has so far been unavailable for comment.

Raya: The VERY exclusive dating app which approves only 8% of applications

Raya is often described as the celebrity version of Tinder, as the dating app requires a membership and a vetting process, which is enticing to big movie stars.

The app – which launched in 2015 – describes itself as being ‘an exclusive dating and networking platform for people in creative industries.’

Users must be referred by an existing member and their application will then be voted on by a membership committee.

Only about 8% of applicants are reportedly approved.

In addition to subscription fees, the company also charges for sponsored placement of user requests.

It comes after Ben Affleck went viral on Monday when a video emerged of him pursuing a woman on Instagram, after she had turned him down on Raya thinking that his profile was a fake.

On Thursday, Chrissy Teigen weighed into the worrying new trends for stars, as she tweeted: ‘I agree celebs shouldn’t be making these creepy desperate video replies on Raya but it’s tacky to release private messages. Ya both wrong, congrats.’

Raya is often described as the celebrity version of Tinder, as the dating app requires a membership and a vetting process, which is enticing to big movie stars like Affleck.

The app – which launched in 2015 – describes itself as being ‘an exclusive dating and networking platform for people in creative industries.’

Demi Lovato revealed that she signed up to Raya after she split with ex-boyfriend Wilmer Valderrama in 2016.

It has also been rumored that actor Channing Tatum became a member after his split from British singer Jessie J.

Rumors that Affleck has been on the dating app have been rife for the past couple of years, though it was unclear up until now if it had been a fake profile.

Meanwhile, Nivine Jay, the woman who posted the video of Affleck, has since made it clear that she didn’t believe the actor was being a ‘creep’ when he reached out to her on Instagram after she unmatched the star on Raya, thinking he was an imposter.

‘I’m seeing a lot of comments calling him a creep and l don’t think that’s fair. l wasn’t making fun of him in the video,’ Nivine, 29, claimed to E! News in an interview. ‘l was making fun of myself for thinking he was a catfish and it was just supposed to be funny.’

In the original video’s caption Nivine explained what happened, writing: ‘Thinking of the time I matched with Ben Affleck on Raya and thought it was fake so I unmatched him and he sent me a video on Instagram.’

The Batman V Superman actor is then seen in an Instagram video speaking directly to camera, attempting to confirm his identity as he asks the woman: ‘Nivine, why did you unmatch me? It’s me.’

The video sparked a feverish response from his fans, while helping to launch her to five minutes of stardom, as she became the subject of much speculation in the hours after she posted her TikTok video.

Click and tell: Nivine Jay went viral on Monday when she posted a TikTok video about the experience

The private, membership-based, social network application first launched as a dating app, but then added features to promote professional networking for members of the entertainment industry.

Membership in Raya costs $7.99 per month, but to join you must be referred by an existing member, and then their application is voted on by a ‘membership committee’.

The acceptance rate for Raya membership applications is approximately eight percent. In addition to subscription fees, the company also charges for sponsored placement of user requests. 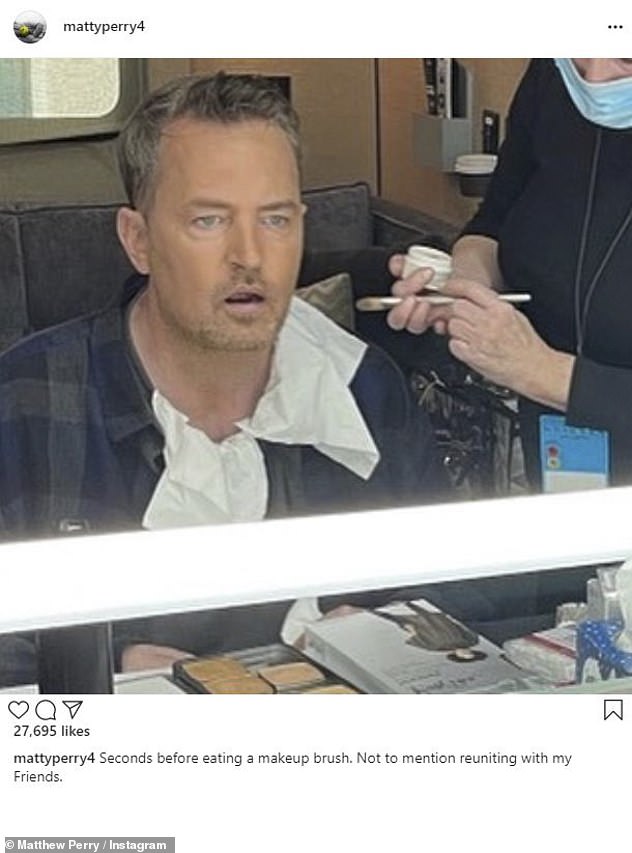 Recently, actress Drew Barrymore revealed she saw ‘a lot’ of other celebrities on the app, saying: ‘It was like looking through an Us Weekly.’

Drew, 46, even revealed how she ‘got stood up by a guy who owned a restaurant’ admitting that she ‘did terribly’ on the app.

Earlier this week, comedienne Whitney, 38, tweeted in response to the drama: ‘okay I am very p***ed off at Ben Affleck because we NEVER EVEN MATCHED ON RAYA. Rude.’

On Thursday, Chrissy Teigen weighed in on the new TikTok trend of stars being ‘outed’ for using the celebrity dating app Raya, including Ben Affleck and Matthew Perry.

While Chrissy, 35, said she did not support stars like Affleck, 48, and Perry, 51, making ‘creepy’ videos to potential dates, she also criticized those who have shared the exchanges publicly.

‘I agree celebs shouldn’t be making these creepy desperate video replies on raya but it’s tacky to release private messages. Ya both wrong, congrats,’ Teigen tweeted to her 13.6 million Twitter followers.

Chrissy recently re-joined Twitter after quitting in March this year, when she said she had been ‘deeply bruised’ by trolls. 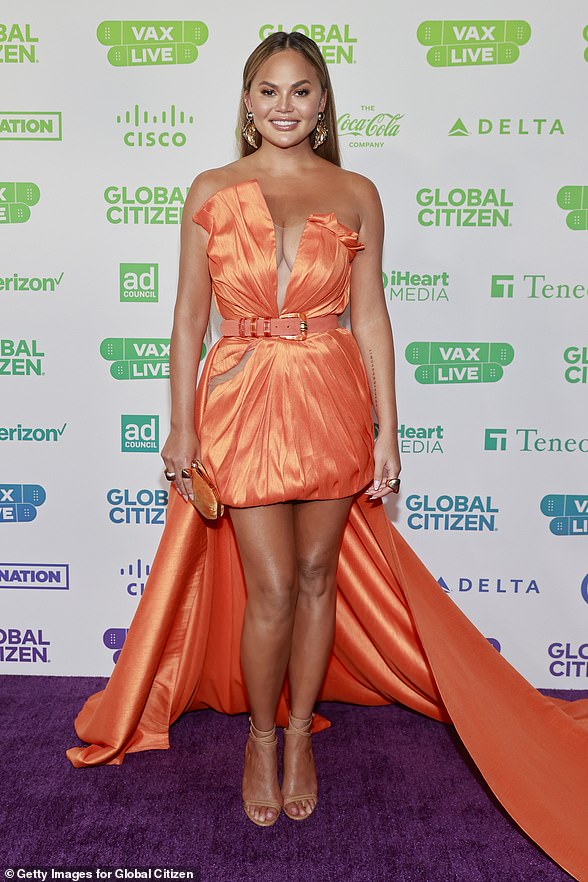 Weighing in: Chrissy Teigen has given her two cents on the Raya saga (pictured last week)