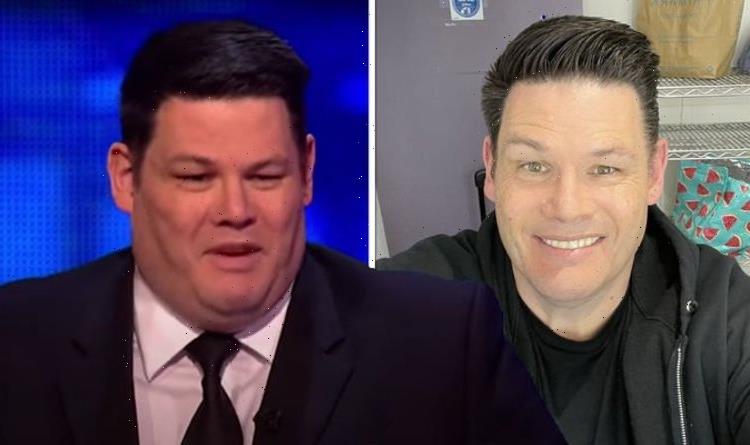 The Chase features Mark Labbett as one of the elite quizzing team on ITV. However, the star has now responded to a claim he was “fat-shamed” on the show by its writers.

Mark has been part of the quizzing team on The Chase since the show began.

He appears on the show along with Shaun Wallace, Anne Hegerty, Paul Sinha, Jenny Ryan, and Darragh Ennis.

The nightly game show sees them take turns facing up against a group of contestants in the general knowledge quiz.

However, Mark has responded after one viewer pointed out their annoyance with the show.

Posting on Twitter, user Smarty Pants wondered: “Oh and why is it that on #TheChase the jokes about the chasers are always fat-shaming @MarkLabbett, making Shaun boring and @paulsinha too, and mean to all except about Jenny the Vixen being so hot?”

Mark was quick to respond to the viewer after he called out how he was introduced on it.

The star known as The Beast replied: “Because the joke writers have to mass produce 220 intros to each of us a year and certain themes develop…”

It seems there are no hard feelings from Mark’s side as he understands the necessity of the joke writers.

However, the star has been sharing his weight loss journey over the past year with his followers.

Appearing on Loose Women earlier this year, Mark opened up about losing 10 stone.

He said: “I gradually dropped X’s off my size, 5XL to 4XL and it looks like the next time I go shopping, I’ll be able to squeeze into XL pants.

“I was 29 stone in my last year as a full-time teacher in 2003, and I was on the verge of getting high blood pressure pills.

“I’ve been mainly at about 25 or 26 up until probably just before the lockdown, and then a few things happened quite nicely and came together and the weight’s just fallen off.”

The 55-year-old went on to admit he’s been cutting down carbs and eating less to keep the weight off.

Part of his diet also involves eating a lot of lean meat and cutting down on sugar.

He added: “I’m not feeling that hungry so you eat less so you lose weight so you’re not as hungry.

“I’m not a drinker but sugar has always been my downfall. A good friend of mine who had the gastric band said it won’t do any good for me as I get all my calories by sugar, and it’s too easy to digest.

“I still have sugar but an awful lot less, I should have less still.”

Mark will also be appearing on Beat The Chasers later tonight along with his fellow quizzers.