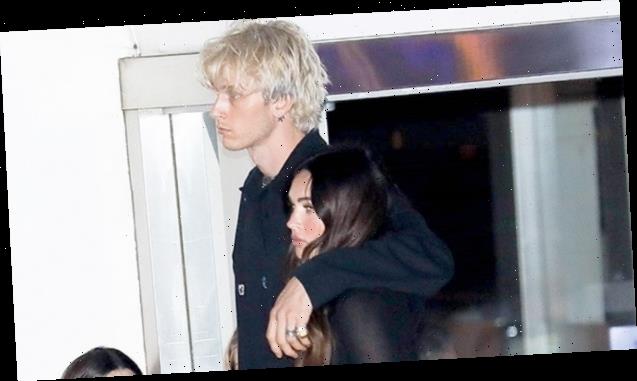 Another night, another date for Megan Fox and Machine Gun Kelly. On Oct. 11, they were photographed hitting up a Beverly Hills hotspot for another night out.

Megan Fox and Machine Gun Kelly spent the evening of Oct. 11 dining at Mastro’s Steakhouse in Beverly Hills. The hot and heavy couple was photographed patiently waiting for their table at the hotspot. As they waited, MGK wrapped an arm around Megan’s shoulder to hold her close, as she leaned into him.

For the night out, Megan looked stylish in a pair of light jeans and a long black cardigan. She wore open-toed black heels to dress up the look, as well. Meanwhile, MGK dressed in all black, including ripped jeans and combat boots. This was their second public date night of the week, as they also went to dinner in Santa Monica on Oct. 9.

During that night out, they embraced the paparazzi and even posed for photos in front of the cameras. Megan cozied up against MGK’s chest, and she held tightly to his arm as they walked passed the photographers. She looked stunning in an animal-print mini skirt and black sweater, and MGK definitely looked happy to have her on his arm.

Megan and MGK are one of the hottest new couples of 2020. They met while filming their movie, Midnight in the Switchgrass, earlier this year. Production was halted due to the coronavirus in March, but Megan and MGK sparked up a romance as things fizzled out in her marriage to Brian Austin Green. The actress starred in MGK’s music video for “Bloody Valentine,” which is when they went public with their relationship.

Now, they’re practically inseparable, and they have been all summer long. Megan was by MGK’s side when his album came out in September, and he’s been open about how strong his feelings are for her. “That was my first experience with being open to love and stuff like that,” the rapper admitted. “I definitely wasn’t set up to believe that that’s something that could ever exist.”

He also added that he fell in love “for the first time” after creating his most recent album, which was released at the end of September. In another interview, he hinted that he plans to be with Megan forever, too. When a fan asked him out on a date in August, he responded, “I’m locked in already right now. No dates for me. Probably ever.” Whoa!